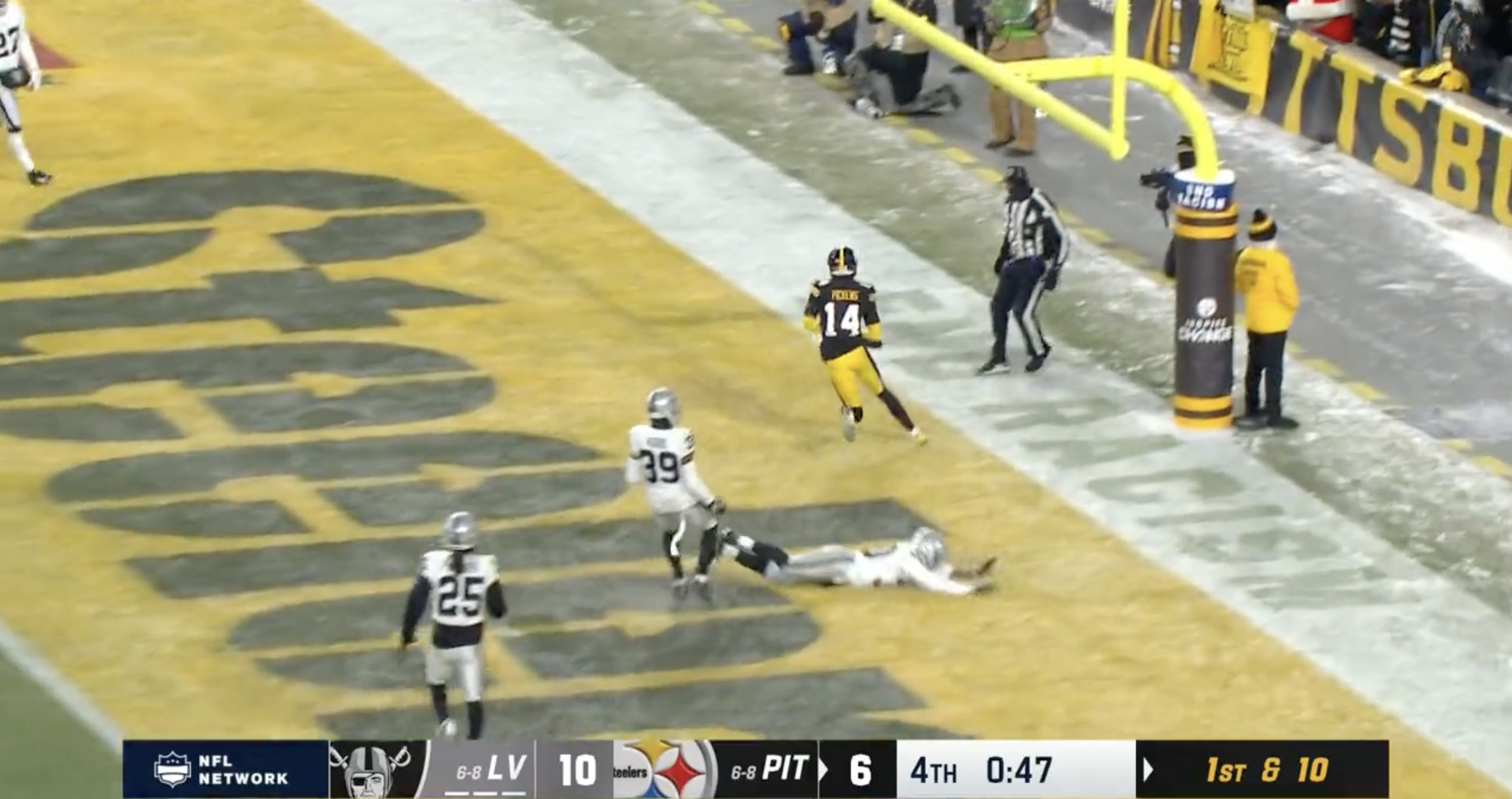 Rookie quarterback Kenny Pickett was struggling with decision making and clicking with receivers, while young players like Pat Freiermuth, Najee Harris and rookie George Pickens were struggling to really get in gear in the frigid temperatures at Acrisure Stadium.

Then, the second to last drive of the game happened for the Steelers. Pickett led the black and gold down the field hitting Pickens for the game-winning touchdown on a strike down the middle. Harris and Freiermuth also made plays in the passing game leading to Pickens’ touchdown. That drive gave the Steelers an emotional 13-10 win over the Raiders on national TV Christmas Eve night, when the late Franco Harris was honored with his jersey retirement.

PICKETT TO PICKENS FOR THE LEAD pic.twitter.com/AElu8KHkXF

For Steelers head coach Mike Tomlin, the game as a whole, but especially the final scoring drive, was a grow-up night for the young offense, which doesn’t feature a single starter over the age of 27 years old. While there were struggles on the night, Tomlin was pleased with the cohesion and poise of the group overall.

“As a collective, particularly some of these young offensive skill guys, I thought it was a grow up night for them,” Tomlin stated to reporters after the win, according to video via the Steelers official YouTube page. “They didn’t allow that [struggles] to rule them. They maintained the clarity of thought and the cohesion required to make those big plays in the waning moments. And I can’t say enough about 8 [Pickett] and 14 [Pickens] and 22 [Harris] and 88 [Freiermuth] and 18 [Diontae Johnson], all of them; they showed poise and resolve and made the necessary plays.

“And so we move forward with a really good Christmas.”

It certainly was a grow-up night for a young offense, especially on an emotional night overall while in less-than-ideal conditions inside Acrisure Stadium.

To see the young rookie quarterback in Pickett connect with the young, talented receiver like Pickens for the game-winning score was a thing of beauty and showed just how special that tandem could be for years to come. Not only that, the final drive showed the potential of the offense overall.

While the offense is rather young and continues to grow, Tomlin stated after the win that the group has to keep its head down and continue to work to realize its full potential.

“The end of the games kind of reflected that. Muth made a big play. Naj made a big play, jump on somebody. GP [Pickens] made a play in the end zone,” Tomlin added, according to video via the Steelers official YouTube page. “We just got a bunch of young guys that’s got some talent. They’re getting better. They’re good enough to win as that happens, and we just better keep rolling our sleeves up, keep our head down, our mouth shut and working.”

Development is the key moving forward for the young, talented offense. They have the pieces. They showed that late in the win over the Raiders as Pickett made the right reads and made some plays on the move, finding Harris and Freiermuth for key conversions before firing the strike to Pickens up the seam for the game-winning score.

It certainly was a grow-up night, and it’s huge that it came in a win for the young pieces.