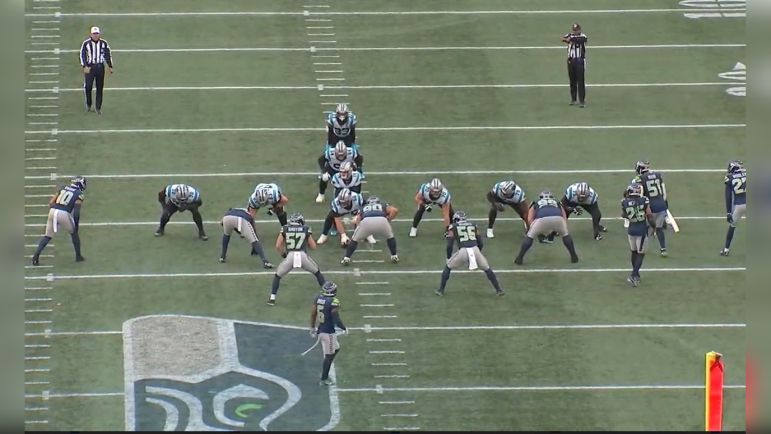 For the fourth-straight week, the Pittsburgh Steelers will face a run-heavy offense in the Carolina Panthers on Sunday in Charlotte. Pittsburgh’s run defense has been heavily scrutinized dating back to last season when it was historically bad and ranked near the bottom of the league in yards and yards per carry allowed. This season after a shaky start, the Steelers have improved against the run, especially after the bye after surrendering 91 yards rushing against the Saints and Bengals combined.

However, since that Week 11 matchup against the Bengals, the Steelers have allowed 100+ rushing yards in three-straight games against the Colts, Falcons, and Ravens whose offensive identity is running the ball. Last week was particularly bad as Pittsburgh ceded 215 rushing yards against Baltimore, getting routinely pushed back at the LOS as defenders could get off blocks, allowing Baltimore’s RBs to gash them on the ground.

No one getting off blocks but Cam Heyward is the one who loses his run gap he (which he admitted post-game). But why are the Steelers playing him at NT? Not good for him, not good for this defense. No Adams/Alualu on the field this play. Dobbins goes for 44. #Steelers pic.twitter.com/Q6g5TqpDQE

The Steelers looked soft upfront against the Ravens, giving up plenty of yards after contact as they failed to control the LOS. That doesn’t inspire a lot of confidence as the team prepares to face a Carolina Panthers squad that has been injected with some life under the guidance of interim HC Steve Wilks who has gone 4-4 in their last eight games and remains in the thick of it in the NFC South. The Panthers have found their identity on the ground as well, rushing for 169+ yards in five of their last seven games including two games over 200 yards in their last four. Alex Kozora pointed out how the Panthers will go heavy and run downhill at opposing defenses in the team’s scouting report.

So, we have a well-oiled machine in the Panthers run game pitted against a patchwork Steelers run defense that just lost DL Chris Wormley for the year and may be without LB Myles Jack who is questionable with a groin injury. While Carolina doesn’t have world-beaters along the offensive line or at running back, they are playing well, having run over stingy run defenses including the Broncos and Buccaneers in recent weeks. Will Pittsburgh be next? As much as I hope it’s not the case, it’s difficult to see the Steelers completely shutting down the Panthers running game given both units’ recent track records.

Instead of stopping the run, Pittsburgh will have to look to contain the Panthers rushing attack, much like they did against the Falcons a couple weeks ago. Atlanta ran for 146 yards on the game, but that total was fueled more on volume than efficiency. What Pittsburgh can’t have happen is what occurred last weekend where the Ravens had success in all situations on the ground, picking up numerous chunk gains while also picking up yards after contact.

The Pittsburgh Steelers aren’t in a position where they can shut down the Panthers rushing attack given the state of the defense as currently constructed. However, what may be the determining factor in Sunday’s game is if Pittsburgh’s run defense can put together a performance like they did against the Falcons and prevent what happened last week against the Ravens from transpiring against in consecutive weeks.

What are your thoughts about the Pittsburgh Steelers run defense? Do you think they can stop the Panthers rushing attack on Sunday? Are we more likely to see a run defense performance like against the Atlanta Falcons or the Baltimore Ravens on Sunday? Please leave your thoughts in the comments section below and thanks again for reading!