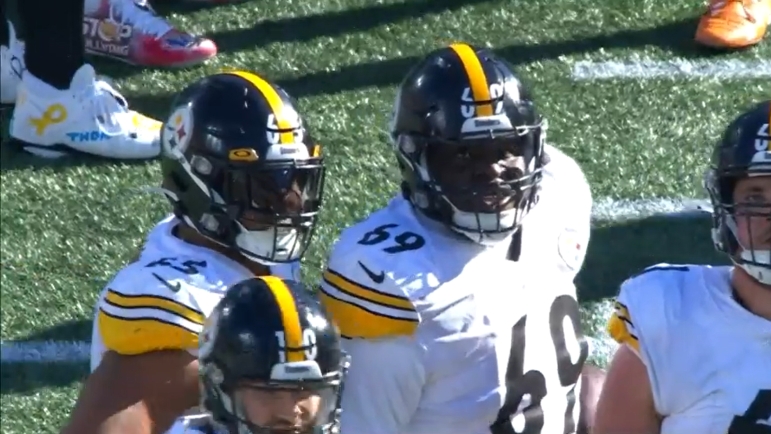 Slowly but surely throughout the 2022 season, the offensive line for the Pittsburgh Steelers has steadily improved, seemingly each and every week.

After coming under fire with serious criticism in the off-season throughout training camp and the preseason, as well as early in the season, the offensive line under first-year position coach Pat Meyer has kept its collective head down and put in the work.

Since the Week 9 bye week, the Steelers’ offensive line is seeing a serious return on the work they’ve put in, developing a rather strong running game while protecting the likes of rookie quarterback Kenny Pickett and backup Mitch Trubisky rather well overall. The group turned in arguably its most complete performance of the year on Sunday in Week 15 on the road against the Carolina Panthers, helping the Steelers rush for 156 yards and three touchdowns while allowing just one sack and two quarterback hits in the win.

My favorite play of the day from the #Steelers OL on Sunday. Kevin Dotson and Dan Moore Jr. were really good in the run game. Mason Cole too.

Watch Dotson on this play. He continues to show flashes of being a really good run blocker. pic.twitter.com/WYvAIjxF0I

The left side of the offensive line featuring second-year left tackle Dan Moore Jr. and third-year left guard Kevin Dotson, along with veteran center Mason Cole, stood out the most on Sunday, helping the Steelers rush for 66 yards and a touchdown on 19 carries off of the left side of the line.

For Steelers head coach Mike Tomlin, not only is the arrow pointing up for guys like Moore and Dotson in recent weeks, the arrow is pointing up for the collective group overall, which doesn’t surprise the longtime head coach, considering the work on and off the field the group has put in throughout the season.

“I think the arrow’s pointed up. I think that’s in time together, formally, informally, they’re legitimately close,” Tomlin stated to reporters, according to video via the Steelers official YouTube page. “I think it helps that many of them at similar stages in life. And so, they got some similar experiences and responsibilities. Nobody’s got a bunch of car seats in the back of their car and, and those type things.

“They’re young men that are evolving as players and doing so together. And I just think it’s helpful when you have community in that.”

There is no real timetable that can be followed on when an offensive line will gel and be comfortable playing with each other and moving as one collective unit.

Currently, the Steelers are gelling and moving as one, beginning to take over games in the trenches for the black and gold as of late. THat’s largely what the Steelers were banking on when they retained right tackle Chukwuma Okorafor prior to free agency and then signed Cole and right guard James Daniels in free agency.

Add in the development of Moore and Dotson on the left side in a scheme that very clearly wants to run the football, the group is starting to find its stride and is coming together rather well overall.

While the arrow is certainly pointing up for the men up front, there’s still a lot of development to do in the next three weeks against the Las Vegas Raiders, Baltimore Ravens and Cleveland Browns. They’re trending in the right direction though and that’s all anyone can ask for from a group that hadn’t played together before the season and was relatively young overall.