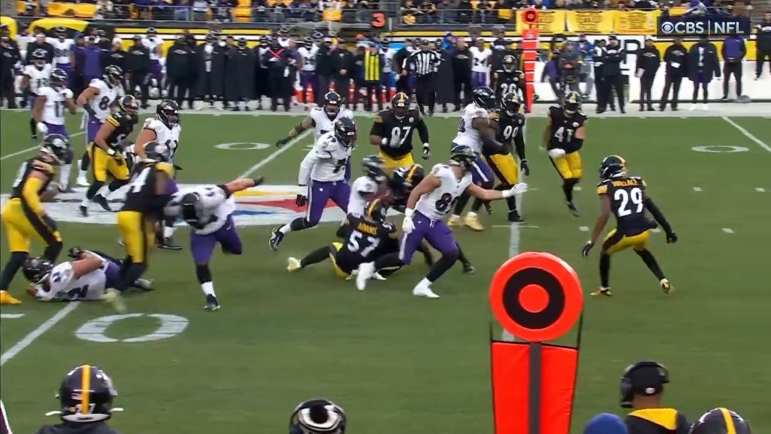 In 16 seasons as the head coach of the Pittsburgh Steelers, and another six seasons in the NFL as a defensive coach with the Tampa Bay Buccaneers and Minnesota Vikings, Mike Tomlin has seen his fair share of things from opposing offenses.

Nothing surprises him at this point, but that doesn’t mean things aren’t more challenging now than they were earlier in his career, particularly defending the run in today’s game.

The schemes haven’t changed all that much, but the added use of quarterback mobility in today’s game, which seems to be a requirement at this point to play the position at a high level, has made things all the more challenging.

Speaking with reporters Tuesday during his weekly media session ahead of the Week 17 Sunday Night Football matchup with the Baltimore Ravens, Tomlin again discussed the challenges that rise up when dealing with a good rushing attack that also features a mobile quarterback playing a key role in said rushing attack, much like the Ravens will possess.

“It’s probably more so [difficult to defend] today because of quarterback mobility. The designed quarterback run component of it, it’s 11 on 11 football, it’s mathematics,” Tomlin stated to reporters, according to video via the Steelers official YouTube page. “Traditional offenses, non-running quarterbacks, they play with 10, essentially, in the running game. When you have quarterback mobility and the willingness to use it, you play with 11.

It really becomes a simple mathematics problem for defenses, much like Tomlin stated. When a team doesn’t have a quarterback with mobility, it’s essentially 10 on 11 in the run game in favor of the defense. Having that element offensively though evens the playing field and makes things much more difficult for defenses to deal with and account for all 11 players in the run game.

That’s why teams like the Ravens with Lamar Jackson and Tyler Huntley, the Bears with Justin Fields, the Bills with Josh Allen and even the Falcons with Marcus Mariota and now Desmond Ridder have had so much success on the ground this season. Fields has already cracked 1,000 rushing yards on the season and Jackson sits at 764 on the year, even while missing a handful of games.

While the Ravens likely won’t have Jackson again in Week 17 for the matchup with the Steelers, the Ravens’ offense will remain a challenge for the Steelers, according to Tomlin, as not much changes schematically going from Jackson to Huntley.

“No, I think that there is…it’s very similar in terms of their ability to utilize the quarterback position by design or to make sure you’re responsible for it,” Tomlin stated regarding the Ravens’ offense. “And so whether or not the quarterback is carrying the ball or not, you have to be responsible for ’em as they carry out play fakes and so forth that mirrors other coordinated runs. And so whether it’s Huntley or or Jackson, all of those things have been very similar.”

The last time the two teams met in Week 14, the Ravens ran for 215 yards in the 16-14 win as the Steelers had no answer for the run game. Now, we’ll get a chance to see if the Steelers learned anything from the Week 14 loss and can correct things in a hurry ahead of a pivotal AFC North matchup in primetime.