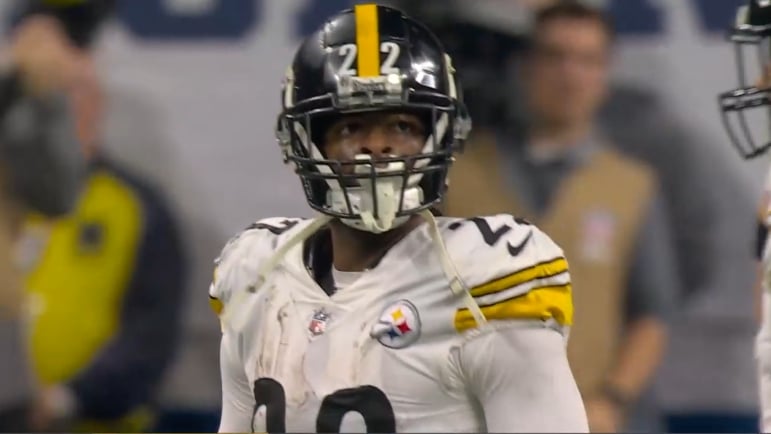 After spending most of the week held off the practice field after leaving the game on Monday night in Indianapolis with an abdominal injury, Pittsburgh Steelers RB Najee Harris looks primed to play this Sunday against the Atlanta Falcons after returning to practice Friday.

While Harris was removed from the injury report and appears to be healthy enough to resume his role as Pittsburgh’s feature back, the Steelers would be wise to look at Harris and the RB room with the long-term picture in-mind going forward.

What do I mean by this?

That Steelers should run a full-blown running back-by-committee backfield for the rest of the 2022 season.

This concept makes sense for several reasons. First, Najee Harris been anything but healthy this season. He suffered a Lisfranc injury at the beginning of training camp and aggravated it at the beginning of the regular season, having it affect his play for several weeks after. He has said that he is fully healed from the ailment, but while he left the game last week with an abdominal issue, we saw him limping on-and-off the field with an obvious foot/ankle issue bothering him before he was officially ruled out for the rest of the game.

It’s long been said that running backs only have so much of a shelf life in the NFL due to the beating they take. In what appears to be a lost season for the Steelers who are virtually out of the playoff race, why waste more needless wear and tear on your first-round investment at RB when Jaylen Warren and Benny Snell Jr. have shown that they can contribute and produce at a respective level? The running game has been on fire the last month, and while Harris has been playing better as of late, he hasn’t surpassed 100 yards on the ground once this season while Pittsburgh’s reserve RBs have maximized their opportunities to boost the overall rushing attack.

Second, while Warren and Snell have looked good in limited action, Harris simply hasn’t been the same player this season as he was as a rookie. Part of his inefficiencies as a runner can be pointed to the injuries he’s dealt with and the poor play by the OL to start the season, but Harris has had his own struggles in terms of lack of burst, poor vision hitting the hole, and playing to his strengths as a powerful runner but choosing to try and be elusive and make defenders miss.

Steelers run game has been incredibly varied under new OL Coach Pat Meyer. They've run just about everything you can run. Here's "Crunch" with two wham blocks on the 1T and 3T. Blocked well. Gilmore makes great open field tackle on Najee Harris or else this is a TD. #Steelers pic.twitter.com/jdykY0u7n7

Right, wrong, or otherwise, Najee Harris has had a disappointing sophomore season. He’s nowhere near his production on the ground as well as through the air as a receiver with Warren playing more third downs the last several weeks, relegating Harris to more of an early-down plodder. This isn’t to say that Harris can’t rebound, as we have seen the likes of Joe Mixon, Saquon Barkley, and other backs rebound after having a down season. However, Pittsburgh needs to be smart in how they choose to manage Harris going forward regarding the distribution of labor in the backfield as HC Mike Tomlin would like to say.

Sure, Harris is the team’s best overall running back, is a team captain, and is a former first round pick. However, given the fact that it may be difficult to see the Steelers re-signing Harris after his rookie contract is up to a big deal, the team realistically has him for three more seasons when you factor in the fifth-year option.

Therefore, in the best interests of Harris as well as the long-term outlook of the organization, it would be wise for Pittsburgh to give Warren and Snell more run down the stretch to preserve Harris in what looks to be a lost season so he can go into 2023 fully healthy with less beating on his body as the Steelers look to make some necessary improvements to the offensive line to maximize Harris’ skill set and make Pittsburgh a respected run-heavy offense to compliment Kenny Pickett in the passing game with a better chance to compete in 2023.

What are your thoughts on Najee Harris this season? Do you think that the Steelers should try and preserve him for the future and give more run to Jaylen Warren and Benny Snell Jr. down the stretch? Please leave your thoughts in the comments section below and thanks again for reading!