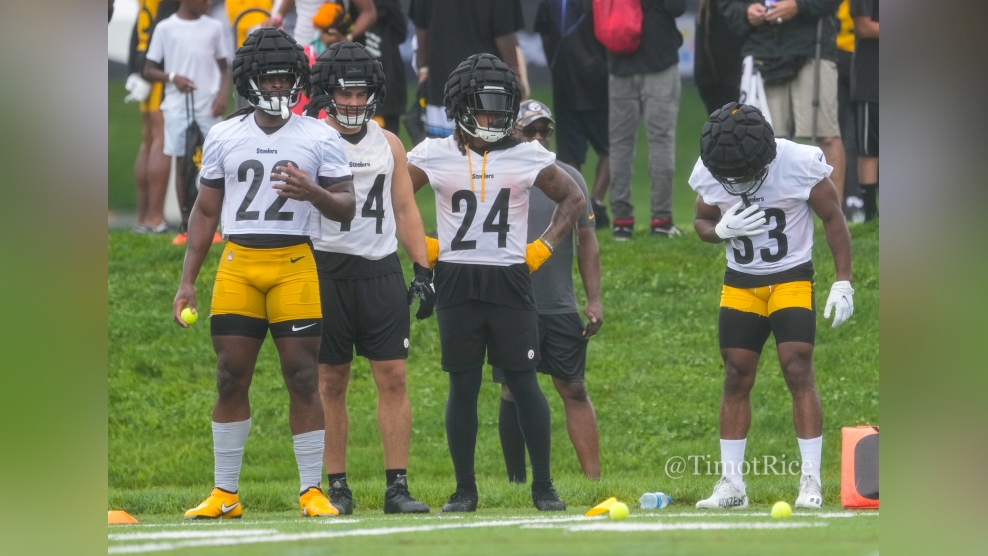 On Friday, RB Najee Harris spoke to the media in lead up to Pittsburgh’s game this coming Sunday against the Atlanta Falcons on the road and was asked about the other running backs in the room with him and how they made the most of their opportunity when Harris left the game due to an abdominal injury.

Harris mentioned that it sucked to have to leave the game, but knew that the offense was in good hands with the other backs who rose to the occasion and contributed to Pittsburgh’s Monday night win in Indianapolis.

“I said, ‘This room right here is doing a good job and, and we’re going to be the backbone of the team right now on offense’,” Harris said to the media Friday in the locker room on video from Steelers.com. “I think they did a good job all year, including Jalen [Warren] and Ant [McFarland] and Benny [Snell]. I think all of ’em did a good job with working together as a team and finishing out the game. And not only that, but just making plays for us in all aspects. Special teams, going down field and making plays, tackling, past protection, making big plays and runs like Jaylen did when he was in against the Saints.”

Harris was the team’s bonafide workhorse running back last season, playing 84% of the snaps and totaled 1,667 yards from scrimmage and ten total TDs. This season, Harris has battled various injuries and inefficiencies as a runner in what has been a sophomore slump for the former first round pick out of Alabama. Still, Pittsburgh appears to have found a gem in UDFA RB Jaylen Warren who has taken on the third down role in the offense at RB and has showcased more juice as a runner than Harris this season along with being a skilled pass catcher and pass protector.

The best of a Matt Canada run offense. 3T unblocked but has zero idea the ball is coming back his way. He essentially blocks himself. Good gain by Chase Claypool with a solid lead block by Jaylen Warren. #Steelers pic.twitter.com/XAOeXI0fMr

Snell and McFarland looked like castoffs to start the season as neither back recorded a single carry heading into Week 12, However, both stepped up in a big way when Harris left the game and with Warren inactive due to a hamstring injury, running for over five yards a pop and totaled 92 rushing yards between the two of them and a rushing TD by Snell in the fourth quarter to put Pittsburgh on top.

Harris is right in saying that the running game has become the backbone of the offense right now in Pittsburgh. It should be going forward as well as the offense has averaged nearly 164 rushing yards a game since coming off the bye, running all over the New Orleans Saints and the Indianapolis Colts for 170+ yards in both contests. Given the gradual progression of rookie QB Kenny Pickett, Pittsburgh would be wise in making the running game the focal point of the offense going forward this season and into 2023 with what they have going right now with all of their running backs.