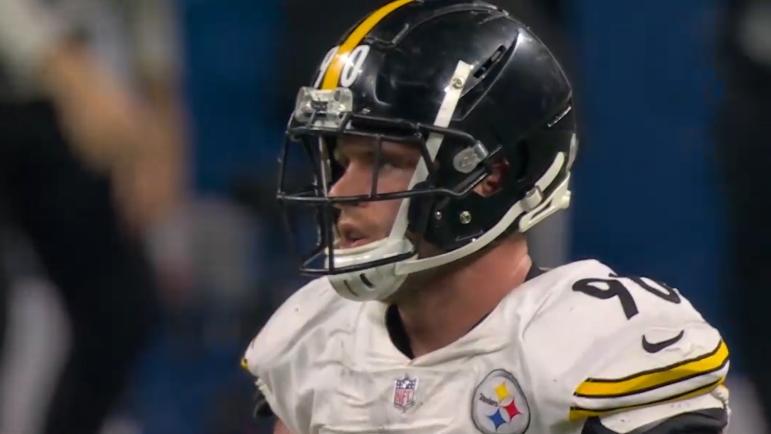 Pittsburgh Steelers outside linebacker T.J. Watt has half a sack in the three games since he has returned from the Reserve/Injured List following pectoral and knee injuries. Considering he tied an NFL record with 22.5 sacks last year, that drop-off is pretty significant, yet the team is 2-1 in those games—even if in the one loss the defense allowed 37 points.

A first-round draft pick out of Wisconsin in 2017, Watt has been one of the most NFL-ready players the team has ever drafted, a day-one starter who has continually gotten better year after year, with no single stat better exemplifying that than his sack number going up every year.

Coming off a season in which he has as many sacks as anybody else has ever recorded, of course, one would figure that there isn’t much room to go up, but right now he’s unlikely to hit double figures with 1.5 sacks on the year with six games to go. Not that that’s what he’s thinking about.

“As long as we win games, I don’t give a s—“, he told the Pittsburgh Tribune-Review’s Chris Adamski when he was asked about his sack numbers being down. A healthy attitude, perhaps, as it’s not as though he has anything left to prove.

TJ Watt, asked about the Steelers’ sack numbers being down:

Watt already earned the title of being the best defender in the game when he won the Defensive Player of the Year Award last year. There isn’t a higher plateau he can reach individually beyond the Pro Football Hall of Fame, so it’s fair that his focus is on team goals and winning games.

Even though the Steelers are just 4-7 on the season, they are 3-1 in the games he has played. He hasn’t necessarily been his dominant self consistently since he has returned from injury, but he’s clearly had an impact on the game, and on opponents’ strategies, because they’re still committing hefty resources to him even with Alex Highsmith across from him making plays.

Pittsburgh has been at its best in the past defensively when it has two potent edge rushers, and I think with Highsmith’s development they’ve reached the point where it’s a ‘pick your poison’ proposition. Highsmith is capable of winning his one-on-one and making plays, both as a rusher and against the run, so if you turn all your focus to Watt, he’s going to wreck your plans, as he did to the Indianapolis Colts at the end of the game.

And that helps the Steelers win. As long as he’s helping to contribute to wins, that’s Watt’s chief priority right now regardless of what his own stat line looks like. Because even his gaudy stat lines of last year don’t fully account for the impact he has on a game anyway.