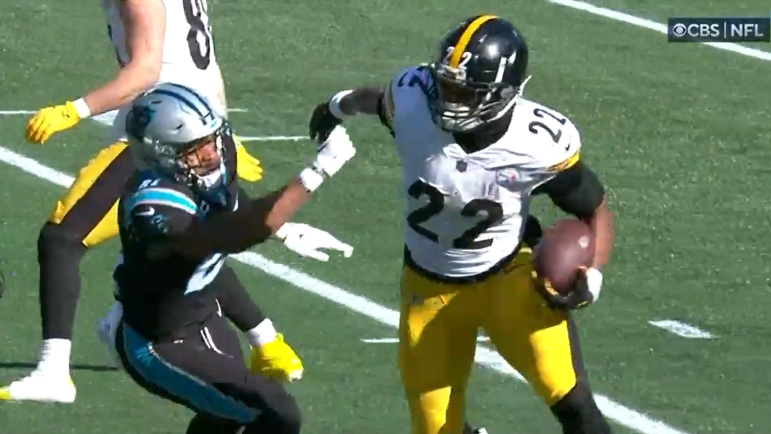 Winners and losers from the Pittsburgh Steelers 24-16 win against the Carolina Panthers Sunday.

Najee Harris: Harris ran hard and helped set the tone as the Steelers returned to playing physical football. He routinely pushed the pile forward and got the hidden yardage Baltimore picked up last week. His first TD was a great play, juking talented LB/S Jeremy Chinn on the edge. Harris missed out on two more short rushing scores to Jaylen Warren and Mitch Trubisky, but Harris was the lead back today.

Dan Moore/Kevin Dotson: Credit to the whole o-line for their push but it’s worth shouting out Moore and Dotson. Pittsburgh ran off left side quite a bit in this game, especially early, and they got a good push for Harris. At their best, both are solid run blockers and created lots of movement in this one. Dotson did have a false start thankfully negated by a Panthers’ encroachment the following play but those two did well. Ditto in pass protection where top DE Brian Burns was a non-factor on that side.

Front Seven Run Defense: Pittsburgh knew to win this game, they had to stop the run. They did. Cam Heyward played his typical excellent football while Larry Ogunjobi was far better compared to a week ago. But the whole group defended the run. It’s team run defense, not just one man. Carolina is an easier team to deal with but had been finding traction on the ground. Pittsburgh stopped them in their tracks today. After rushing for more than 200 yards last week, the Panthers were held to 22 Sunday and an incredible zero first downs rushing.

Alex Highsmith: Gotta shout Highsmith out in particular for this one. A homecoming heading back to Carolina where he grew up and played his college ball at Charlotte. After a relatively quiet first half, Highsmith took over the second half with a sack and great series of plays in the fourth quarter with the Panthers in goal-to-go. A second down tackle at the line followed by a third down pressure that led to a Sam Darnold sack, holding them to a field goal.

Diontae Johnson: The taunting penalty wasn’t acceptable, no denying that, but there’s far more good than one bad (and dumb) play. Johnson was the Steelers’ guy on third down in this one and Pittsburgh smartly aligned him more often in the slot, converting at least three times from that alignment with slants and outs, including a 3rd and 14 conversion for 19 over the middle. He’s still looking for that first TD but he helped move the ball today. Just no more penalties, please (and don’t touch onside kicks when you don’t need to).

Third Down Offense: A tremendous showing today converting short and converting from far-out. Pittsburgh finished the day 12-16 on third down and it’s a big reason why they controlled the clock for large portions of the game, including the final drive.

Chris Boswell: You kick the game-sealing 50-yard field goal on the road, you get on this list. That’s money. You don’t know the value of a good kicker until you don’t have one. Steelers have been fortunate to find and develop Boz.

Marcus Allen: Dumb penalties the theme of the game. But none were dumber than Allen’s. After a third down Heyward sack, Allen – for reasons totally unclear and unwarranted – ran from the middle of the field on punt team to the Panthers’ sideline to jaw with their players. An easy an inexcusable flag that may honestly consider him being benched on Christmas Eve. It was that egregious.

Diontae Johnson had a good game as a receiver but his taunting call was nearly costly, though Pittsburgh saved face and still found the end zone. Pittsburgh ended the day with seven penalties for 81 yards, two Christmas sweater-ugly looking numbers.

James Pierre: Steelers’ corners weren’t at their best in this one. Pierre has always been a bit questionable above the neck and appeared to make a mistake of Terrace Marshall’s long third down catch down the sideline, Pierre failing to carry and match the route vertically leading to a Panthers’ touchdown. Carolina had too much success throwing the ball in the first half when Pittsburgh was taking away the run. Late in the game, the Panthers again found plays vertically and aside from some RPO/bubble breakups, the Steelers’ corners didn’t win 1v1.

Robert Spillane: Best against the run, Pittsburgh believes he’s also a great coverage linebacker. In zone, he can survive, but he can’t run in man and the reception he allowed to RB Chuba Hubbard is another example of that, taking a short checkdown and running away from a diving Spillane for a 45-yard gain.