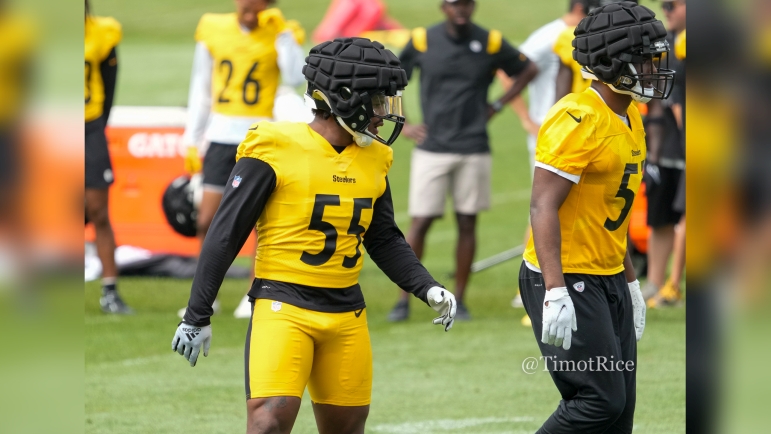 As we’ll do every week to get you ready for the upcoming game, our X-Factor of the week. Sometimes it’s a player, unit, concept, or scheme. Here’s our X-Factor for Sunday’s game against the Atlanta Falcons.

I keep that a bit broader and vaguer not quite knowing how the inside linebacker rotation will look. Robert Spillane is back after a one-game absence, though Devin Bush played well as the team’s dime linebacker. Myles Jack is expected to play but has been bothered by a knee injury for weeks. Similar to the New Orleans Saints game, it’s possible he’s limited and Spillane gets the nod.

Stepping out of the weeds for a moment, the Steelers’ inside linebackers will be key in this game. Atlanta’s one of the few run-heavy teams though the NFL is starting to come full circle. As teams have been building and loading up to stop the pass, preferring smaller and more athletic players (as was the Steelers’ calculation with Bush), offenses are countering by going with power run offenses. Tennessee, Cleveland, Baltimore, San Francisco. They all have different flavors and degrees and the Falcons aren’t really a “power” team. But they sure run the heck out of the ball, a league-high 70% on first down. They feature three running backs, a mobile quarterback, and variety of schemes, though they rely heavily on zone reads and outside zone runs.

Needless to say, stopping the run will be important. Which means the inside linebackers are going to be important. Bush has gotten better but still could play the run more effectively, getting off blocks, while Jack is coming off one of his worst games of the season, especially struggling in coverage. It’d also be nice to see splash from anyone among this group. Tackles for loss, forced fumbles, sacks, interceptions, the collective group has been fine but far from spectacular. No one is going to be Ryan Shazier or Fred Warner but one impact play a game isn’t asking too much.

These guys are going to have to tackle well, communicate well (the Falcons use a ton of pre-snap shifts, trades, and motions), find the ball, and make plays in the run game. Pittsburgh’s run defense is a night and day difference, 32nd a year ago, 6th in 2022, so there’s reason to believe the Steelers will contain the Falcons’ ground attack. But they’ll have to prove it this week. Next week too when they face the Baltimore Ravens for the first time this season so consider the Falcons the opening act and the Ravens the main event.