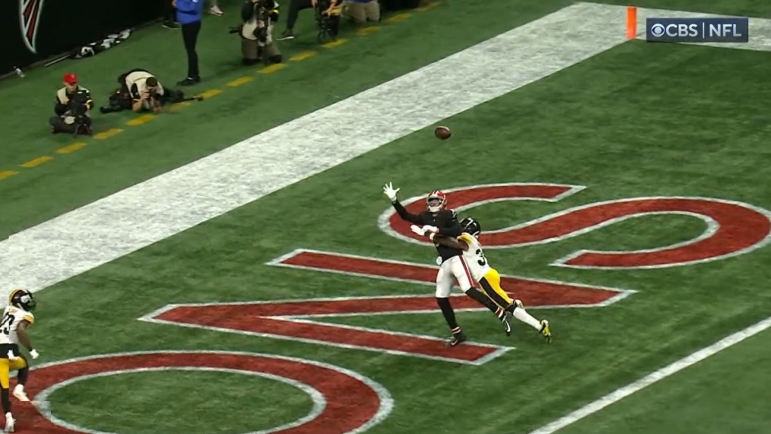 It took until Week 13, but the Steelers were finally able to scrounge together their first back-to-back wins of the season. While it felt like the Steelers were dominant through the first three quarters of football, they found themselves in a battle through the final quarter, in large part due to the Atlanta Falcons establishing their run game after halftime.

They kept pounding outside zone concepts at the Steelers’ front seven and Pittsburgh had no answer. Atlanta was finally able to build off of that strong run game, faking an outside run play and finding their tight end on the backside for a touchdown, making it 19-13 with a quarter to go.

MyCole Pruitt dives in for 6 ❌

The Steelers’ failure to finish drives, kicking field goals four out of five times on drives that got inside the Atlanta 30-yard line, kept the Falcons in the game and they were ready to strike if given the opportunity. That opportunity almost presented itself on the very next drive. Only three plays into the drive, on 3rd and 8, Kenny Pickett scrambled and found Diontae Johnson short of the sticks.  It appeared, at first, that Johnson caught and fumbled the ball immediately back to the Falcons.

After a video review, the play was overturned stating that Johnson hadn’t fully completed the catch.

Finally, a non-catch that goes in Pittsburgh’s favor!

If this play doesn’t get overturned it’s hard to assume that Atlanta wouldn’t have used the momentum fully swinging in their favor and their new-found running game to take the lead. Instead, the Steelers were able to punt the ball away, giving the Falcons a full field to navigate.

What Atlanta did on their following offensive drive was impressive. They continued to bully the Steelers up front, getting all the way to Pittsburgh’s 10-yard line in 13 plays. That’s when the Falcons began to implode.

On another outside run play, Cordarelle Patterson gets to the edge and scores untouched, but not without the help of his tight end holding outside linebacker, Malik Reed. The Steelers got a huge break, the hold backing up the Falcons to the 20.  It’s their first misstep of the entire drive.

Compounding their mistake, the Falcons backed up another five yards after their tackles were called for a false start for leaving early, something they appeared to be getting away with most of the day.

The penalties got them backed up, but it was actually a no-call that was the turning point of the game. The Falcons got back to the 10-yard line for their third and goal play and ran their first-round rookie, Drake London, up the seam from the WR3 spot. With the Steelers switching off their men, it left 5’10’ nickel cornerback, Arthur Maulet, against the 6’4″ London.

The ball is thrown high, but Maulet gets his arm wrapped around the WR’s waist, inhibiting his ability to jump to his fullest ability for the football.

Referees are flag-happy as it is and to see a penalty that obviously go uncalled was shocking. It’s possible that safety, Damontae Kazee blocked the back judge’s vision enough to not feel comfortable throwing the flag, but it’s hard to say.

Regardless, the play forced to be held to only three points, a moral victory for the Steelers’ defense after an awful drive that spanned 16-plays and over nine minutes of game clock.

It felt like the Falcons had to take the lead on that drive because of the way their offense had played all day. They could run the football well and had trouble consistently moving the ball in the passing game. Their nine-minute drive left minimal time for their offense to play their way of football when/if their defense was able to gain possession back from Pittsburgh.

It’s tough to say the game came down to whether or not a referee pulled a yellow piece of cloth out of his pocket, but in this case, it was extremely pivotal in how this game played out.