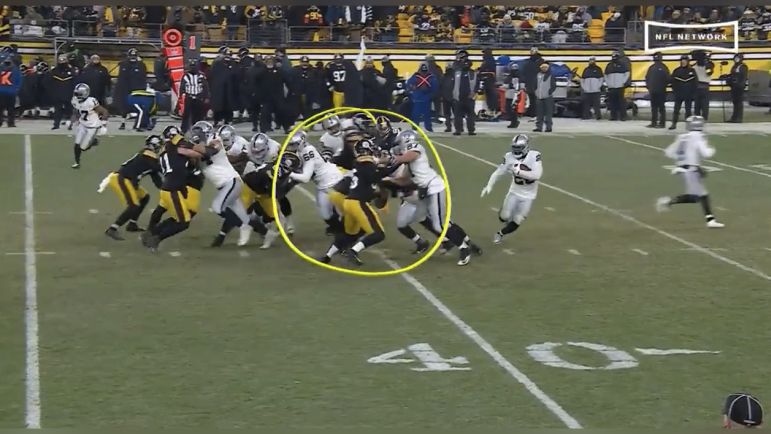 Going into the game on Christmas Eve against the Las Vegas Raiders, I felt something that I hadn’t had for this Pittsburgh team in a long while, expectations.  It was a primetime game in frigid weather honoring Pittsburgh legend Franco Harris who passed away mere days before he was to be honored at this game. The Steelers weren’t the far superior team on paper, but it felt like they should dominate in old-school Steelers fashion.

Surely thanks to my expectations, the Steelers came out flat, giving up a 14-play, 72-yard opening touchdown drive to the Raiders. However, that was one of the few blips on the defense’s report card the rest of the day. While the offense was struggling for Pittsburgh, their defense had the looks of the 1970s “Steel Curtain” that played with the man being honored. They started the second half with two interceptions in only six snaps. However, the offense wasn’t able to score off of either turnover leaving the score stuck at 10-3.

It was getting more and more apparent that this game likely would have to be won by the defense, but at the same time wondering how much longer they can hold up their end as their putrid offense spins its wheels.

With a 2:19 left in the third quarter, it seemed the like the pipe finally burst. The NFL’s leading rusher, Josh Jacobs, appeared to finally break one, bouncing outside on an ISO run to the left.

He ran right up the numbers all the way to the Pittsburgh 23-yard line before safety Minkah Fitzpatrick could bring him down. With the Raiders now easily in field goal range my heart dropped, and all hope was seemingly lost. Even though there was a full quarter to go, going down two scores felt like a death sentence. I resorted to complaining about the Raiders receiver seemingly holding Cam Sutton.

To my delight, the yellow flicker of the NFL Network flag graphic popped up at the bottom of the screen, however, it wasn’t for the hold I thought I saw. It was even better.

Las Vegas tight end, Foster Moreau, was dinged for a personal foul facemask for grabbing onto Alex Highsmith’s facemask while trying to seal the edge for a bouncing Jacobs.

The penalty was an extremely costly one as it took Las Vegas from the Pittsburgh 23 all the way back to their own 26.

They were able to turn their 1st & 25 into a manageable 3rd & 12, only to be subjected to Alex Highsmith coming in unblocked on a stunt to sack Derek Carr for a loss of 13.

After a poor punt by the Raiders, the Steelers were finally able to capitalize on good field position with some points, making the game 10-6 and setting up the Steelers to take the lead when they inevitably scored their first touchdown of the game. A defensive stop combined with points swung the momentum fully to the Pittsburgh sidelines and that Jacobs run ruined by penalty would be the last glimmer of an offense we’d see from the Raiders the rest of the game.

The penalty on the Jacobs run completely changed every aspect of the entire game. Even if the Steelers’ defense only held Las Vegas to a field goal on that drive, the road to winning the game would have likely meant overtime for a chance to win. You never want penalties to be what changes the course of a game, but in this case for the Steelers, it helped them preserve an important game in their franchise’s history as well as kept their post-season hopes alive.