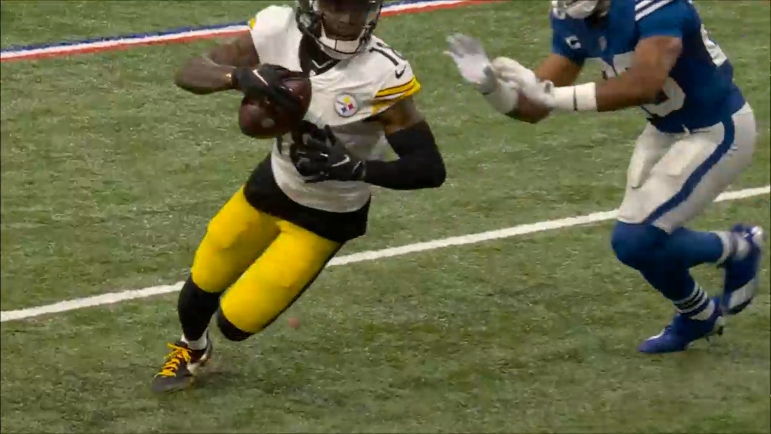 Pittsburgh Steelers wide receiver Diontae Johnson saw a game-high eight targets on Monday night against the Indianapolis Colts following two weeks in which the Pro Bowler only saw five apiece. Although he left some meat on the bone, he finished the game with five catches for 49 yards, his second-highest yardage total since week five. And his usage wasn’t a coincidence.

“Yeah, they talked about it a lot, trying to move me around the offense in a lot of different ways, trying to get me the ball,” he told reporters yesterday via the team’s website when he was asked if there was a conscious effort to target him more.

“Pretty much the same thing week,” he added about the plan for the Atlanta Falcons. “Just trying not to do too much. I know what I’m doing out there. I know the game of football, so just wherever you put me on the field, I’m just gonna execute no matter what.”

It’s worth noting that Johnson’s eight targets were comfortably over a quarter of the Steelers’ total, as Kenny Pickett only attempted 28 passes during the game. And he targeted 10 different players, completing at least one pass to each. Usually, the ball is in the air more than that, so in terms of percentage of distribution, it’s even more significant.

A 2019 third-round draft pick, he had been gradually building up his profile year by year before breaking out last season, putting up 107 catches for 1161 yards and eight touchdowns. The offense has struggled to get him effectively involved this year, however, amidst a changeover at quarterback and an adjustment at the wide receiver position.

In actuality, minus Cody White, Johnson is the only wide receiver left from last season. JuJu Smith-Schuster, James Washington, and Ray-Ray McCloud all signed elsewhere in free agency. A few weeks back the Steelers dealt Chase Claypool to Chicago. This is a new group catching balls from new arms—minus the lone holdover.

Does that explain why his numbers are so poor this year? Of course not, at least not entirely. He’s not free from blame, for starters, with a smattering of dropped passes and failures to complete potential big plays by being unable to keep his feet inbounds, for example—or running backward.

But there are plenty of factors that have been out of his hands, including the quarterback position, but also the way he has been used. Yet at the end of the day, he’s still regularly getting open. Will they start finding him more over the course of the final six games? And if they do, what can he make of those extra targets?