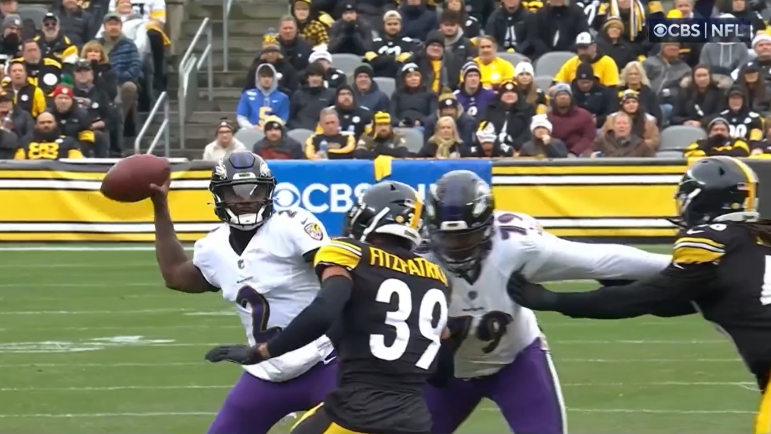 With the season potentially on the line, the Pittsburgh Steelers are preparing to face AFC North rival Baltimore Ravens. For the third straight time, they will face backup quarterback Tyler Huntley, as former MVP Lamar Jackson is out with an injury once again. Here are five stats to look for in the Steelers’ Week 17 matchup.

18%. There is a scenario that sees the Steelers’ playoff odds jumping from 3% to 18% going into Week 18 according to Fivethirtyeight. This starts and ends with them beating the Ravens, as they are instantly eliminated with a loss. Mainly, they need the New England Patriots to beat the Miami Dolphins and the Seattle Seahawks to beat the New York Jets. While 18% isn’t a lot, it looks much better than 3%, and gives them plenty to play for in the season finale.

1. In the last two games, the Steelers rank have the lowest run success rate allowed, while the Ravens rank have the highest success rate on run plays according to rbsdm.com. The Steelers held the league’s leading rusher in Las Vegas Raiders’ Josh Jacobs to 44 yards, and the Carolina Panthers (who rushed for over 200 yards the game before and over 300 yards the game after) to 21 yards on the ground. On the other side, the Ravens ran for 138 on 13 carries against the Cleveland Browns, and 184 yards on 34 carries against the Atlanta Falcons. This will be a big test for the Steelers’ front, and it’s one they must be up for to keep the season alive.

7.7. According to PFF’s premium stats, Huntley throws a turnover-worthy pass on 7.7% of his throws when he is blitzed, which is the highest rate in the league among quarterbacks with at least 100 dropbacks. The Steelers’ defense ranks first in the league with 17 interceptions, and has the sixth-most blitzes called in the league. They must take advantage of Huntley’s mishaps.