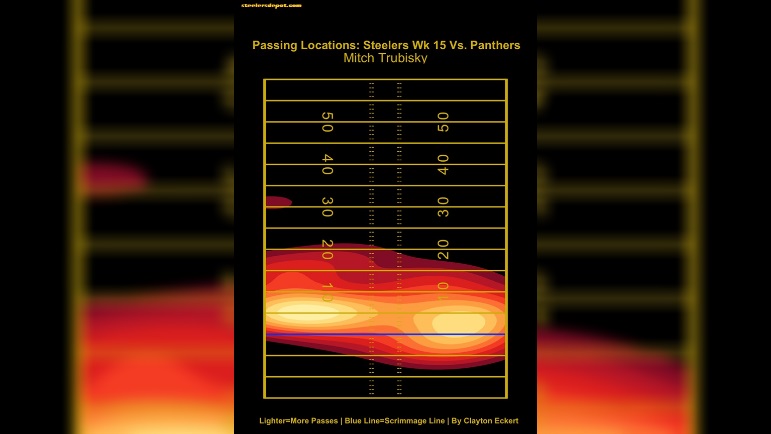 Week 15 is in the books, and it’s time to provide my quarterback passing locations charting for the game and the regular season thus far. In case you missed the previous articles, I will be charting, visualizing, and providing takeaways for the all-important quarterback position for the Pittsburgh Steelers. Thanks to Thomas Mock for his great article that helped me learn much of what I’m using today. Couple notes before we jump in. All yardage referenced are air yards from the line of scrimmage and bats at the line of scrimmage, spikes, and clear throwaways removed. This week’s charting has a batted pass and throwaway removed.

Quarterback Mitch Trubisky played a good game executing the teams plan and blueprint of recent success, relying on a stout defense and running game, not having to do too much in the passing game. This was refreshing coming off his last performance where he did sling it more, but of course had three interceptions. Against the Panthers, he went 17/22 for a second consecutive high completion rate 77.3 which was the least attempts in a game this season in route to victory, for 179 yards with no passing touchdowns or interceptions.

He did have a couple near interceptions though, one staring down wide receiver George Pickens and the defender nearly undercutting it for a turnover late in the game, along with another to Pickens in the second quarter on a dangerous off-target throw in traffic on an in route, and also dropped for one sack on a third down. Trubisky encouragingly contributed situationally to the strong running game that scored all three of the teams touchdowns and refreshingly cashed in red zone opportunities (3/3), picking up conversions on third and short on multiple occasions and getting one in for a touchdown on the goal line. Pittsburgh was historically good on third down in this game, with Trubisky being a big part of that going 6/7 on charted throws (85.7%) along with his sneak contributions.

Now for some notable patterns in the game. One of the biggest adjustments and factors to the no interception game was a clear avoidance between the hashes, where two of Trubisky’s three picks came in week 14. He started the game with seven straight completions (excluding his throwaway), mostly short passes that included three straight behind the line throws and four straight first down passes. Trubisky only had to throw four times in both the first and fourth quarters, again highlighting the ideal game script in which the team never trailed. Wide receiver Diontae Johnson was the primary target catching all ten of his targets, putting on a separation clinic throughout and spending more time in the slot (a trend that refreshingly started last game), largely on out routes including a stretch of four straight completions coming out of the locker room, which I’ll highlight more as we dive deeper.

Let’s look at a simple view of the 20 charted passes, with number of throws at each pass distance for week 15: 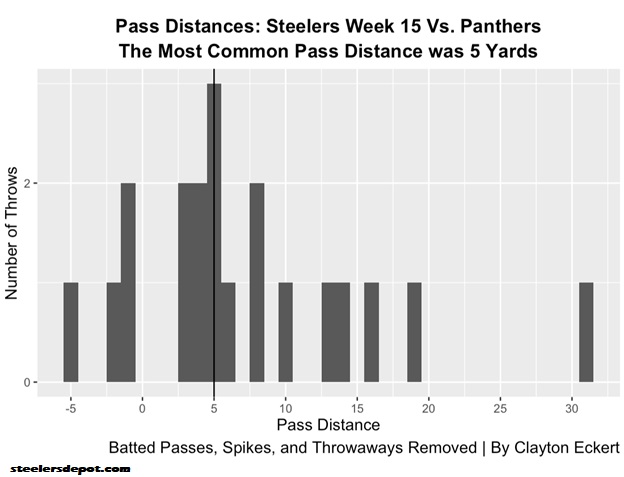 There was a tie for the most common pass distance this week between 0-5 yards and 5-10 yards at 35%. Starting in the 0-5 range, this number was up tremendously from his performance last week (23.3%). The highlight was a third and six redzone opportunity in the third quarter, targeting Johnson on an out route from the slot for the catch it at five yards, then giving a tremendous effort after the catch, forcing a whopping three players to miss and pick up plenty on the gain of eight for the conversion! He was rightfully pumped after the play, but unfortunately got in the defenders face for an unsportsmanlike penalty that thankfully was not costly on the Trubisky touchdown sneak drive. Another example was an off target throw on a low pass to wide receiver Gunner Olszewski early in the game, who went down for a nice diving catch on the short gain of three.

The first pass of the game was in the 5-10 yard range (down slightly from last week), on a great throw and catch where Johnson motioned to the slot, running the slant, and making the contested grab against solid Panthers cornerback Jaycee Horn’s tight coverage for a third down conversion. Another was on a play action scramble drill, bailing the pocket a bit early as tackle Dan Moore recovered on his block, throwing high and out of bounds toward Pickens, with the defender getting his hands on what was basically a throwaway. Two big third down conversions came in this range to end the game, both to Johnson. The first was a third and 14 following a Pickens false start, where Johnson got great separation on an in route, then stopped on a dime to spin past the defender for nine YAC and pick up the huge first down. The other was on third and six, a stop route past the sticks to keep the drive and clock moving on the gain of nine, which was huge and refreshing in route to Pittsburgh’s victory.

20% of passes were behind the line, the third most common distance of the game and a big percentage increase from last week (6.7%) largely due to game circumstance. The highlight was successful running back screen to Jaylen Warren, who caught it five yards behind the line and got outside an outstanding block from guard James Daniels in space and great gain of 11, so good to see from a Pittsburgh team that has struggled with screens in the past. Another was off-target to wide receiver Miles Boykin on a drag route, having to reach back to make the snag and fell immediately upon the catch.

15% of passes were 10-15 yards, down from a high rate of 23.3% last game. One was in the Johnson takeover in the third quarter, getting great separation on the out route from the slot, but ran out of bounds for -1 after the catch instead getting up field with space, content with his third and ten conversion. Someone likely got in his ear about it, because the aforementioned three broken tackle play followed. 10% of passes were 15-20 yards on two passes, compared to none in week 14. The one completion was to Pickens on a stop route making the catch with separation against cushion on the chain moving gain of 15. Only one explosive attempt in the game, coming out at 5% and down from a whopping 16.7% in Trubisky’s last showing. This one he lobbed up for Pickens on a third and four go ball, making an impressive contested hands over the cornerback for the conversion, which set Pittsburgh up in the red zone.

Here are the dots for the charted throws for week 15 as we add more context: 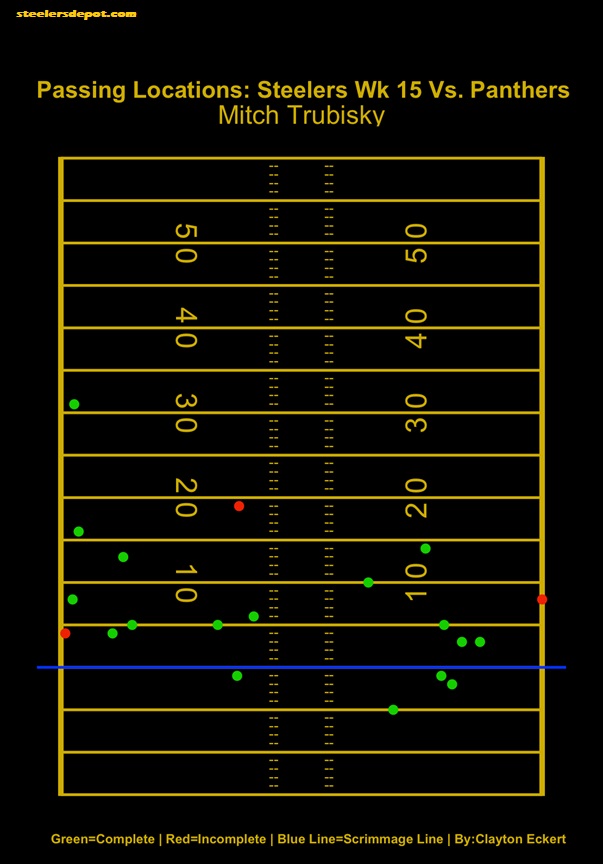 Right away the dots give visual context to Trubisky’s high completion rate and targeted areas, with only three charted incompletions, two along either sideline, and the other on the aforementioned dangerous overthrow to Pickens. To the earlier point, far less targets over the middle than last game, with none between the hashes and going 5/6 between the numbers (83.6%), two of which were behind the line with each completion coming at ten yards of less. We see very reminiscent numbers to what quarterback Kenny Pickett (out with a concussion) has provided in this range, with Trubisky going 13/15 (86.7%). He has been very good in the intermediate range this season, and went 4/5 in this game (80%) along with connecting on the lone explosive pass. Lots of throws from the numbers to the sideline, with seven to either side and accounting for 70% of his charted passes, and a completion rate of 85.7%. 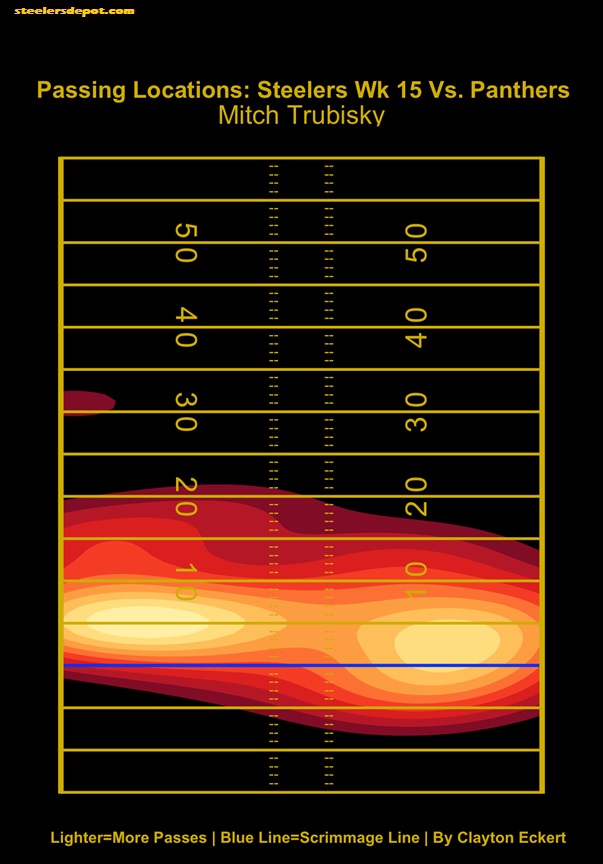 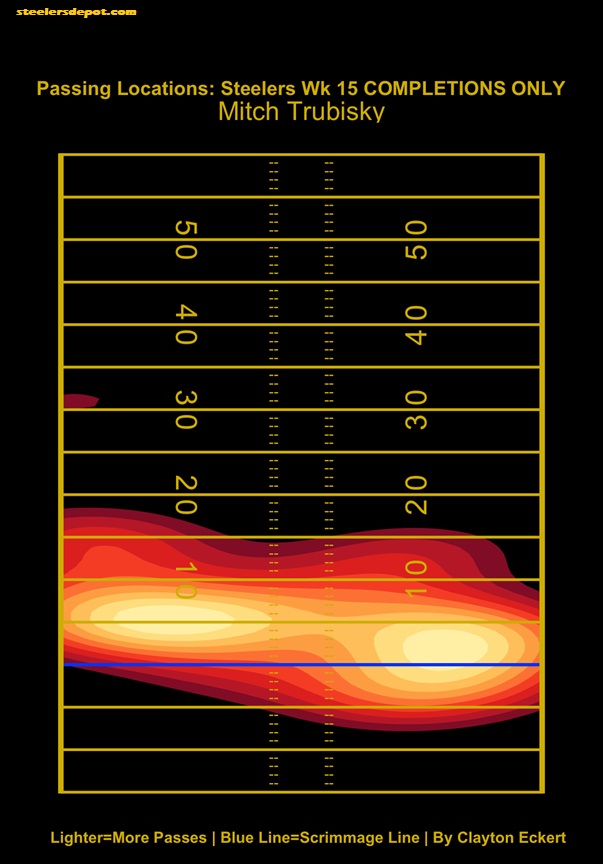 With only three charted incompletions, we don’t see a big change in the two charts. The most notable is the 19-yard overthrow that fell incomplete, highlighting the drop off in the 15-20 yard range. His most common pass range was on the left side at three to seven yards, while he completed to both sides of the field equally in the short range, at -1 to four yards from the right numbers to the outside split, and a bit deeper to the left at his same intended range. The biggest differences in Trubisky’s last two games are the drop offs over the middle and in the explosive range. It will be interesting to see what this looks like against the Raiders and moving forward, likely holding true if Pittsburgh can stick to their guns and play to their style, regardless of who is at quarterback.

Now let’s look at the 445 charted throws on the season for Pickett and Trubisky: 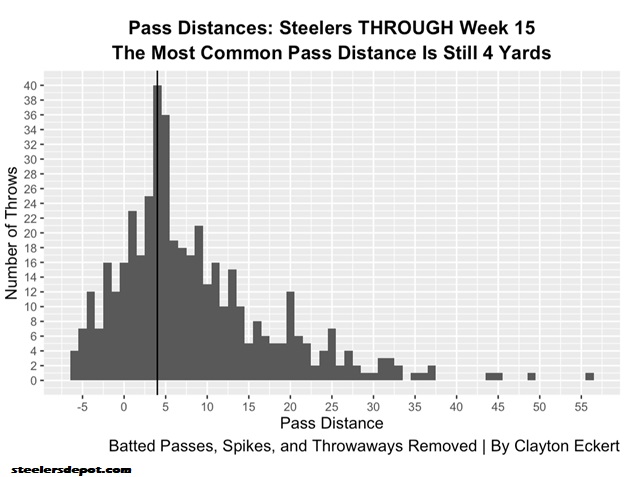 The pass distances remain in the same ranking order again this week, starting with 0-5 yard passes. The most common pass distance is now at 35.3%, for the same percentage as last week’s season average. 27.9% now at 5-10 yards, an increase of 0.4% compared to last week and continuing to encouragingly climb this season. 10-15 yard passes are now at 15.5%, plateauing for the same average through week 14, which similarly leveled off with Pickett the previous two games at a lower 14.9%. Explosive passes expectedly decreased this week, now at 13.9% which dropped half a percentage point. 13% of passes behind the line now, for a slight uptick compared to it being on the downslide in recent weeks. The least common pass distance is still 15-20 yards as it has been most of the season, remaining at 9.2% after decreasing the last several weeks. 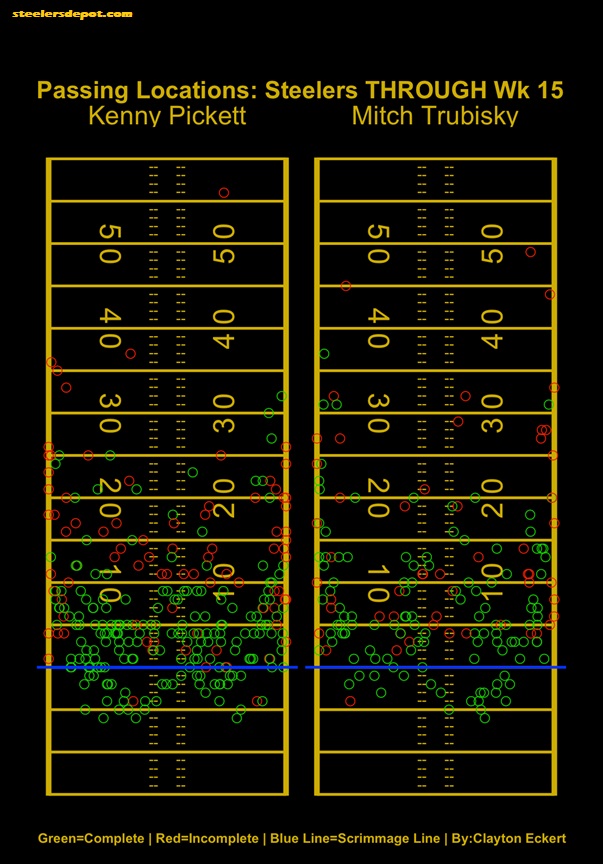 On the stat sheet, Trubisky is now 117/180 (65%), boosting his completion rate once again and now ties with Pickett in that regard compared to his 60.9% from weeks one-six, and still sits at four touchdowns and five interceptions. In comparison, Pickett is 191/294 (65%) with his completion rate being more impressive given the higher volume, and only four touchdowns and eight interceptions. While Pittsburgh’s running game and great performance in situational football was fantastic to see, that level of success is likely not sustainable, and really hoping to see the passing attack join the party in the red zone and hopefully improve their touchdown/interception ratios moving forward. Looking at the pass distances, Trubisky is now 82/107 (76.6%) at ten yards or less, encouragingly increasing from 75.3, compared to Pickett’s stellar 164/195 (84.1%). In the intermediate range, Trubisky has been much stronger this season and is now 32/49 (65.3%), which also increased from 63.6% and more than doubles Pickett’s 32.1% (18/56). With the one explosive completion this week, Trubisky is now 11/28 (39.3%) which increased in each of the last two games and from 31.8% earlier in the season, and surpassed Pickett’s (13/34) 38.2% completion rate. They have both encouragingly improved in this regard as of late, and looking forward to seeing where all the data trends and how the passing game fares these last few games. 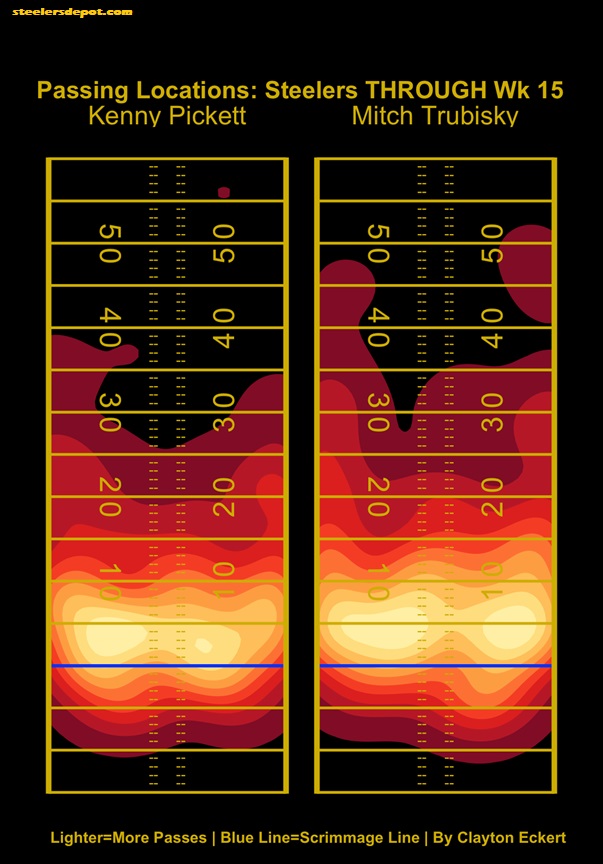 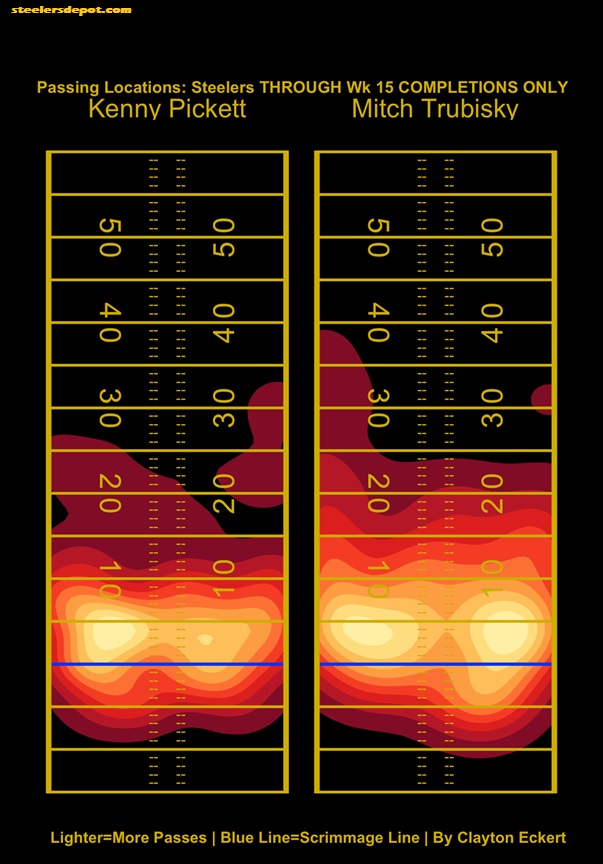 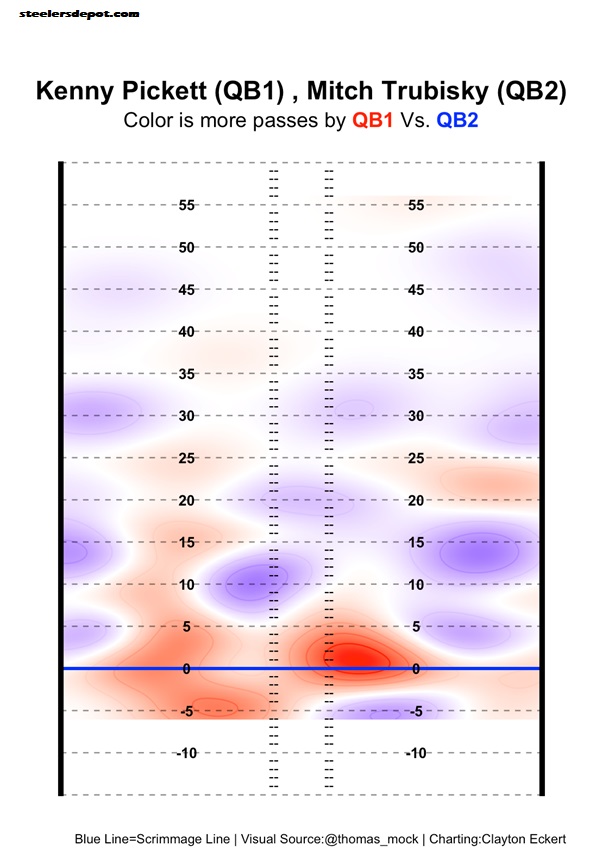 What are your thoughts of Trubisky’s performance against the Panthers? What about how the Steelers quarterbacks have compared to date? How do you think things will play out the remainder of the season? Thanks for reading and let me know your thoughts in the comments!