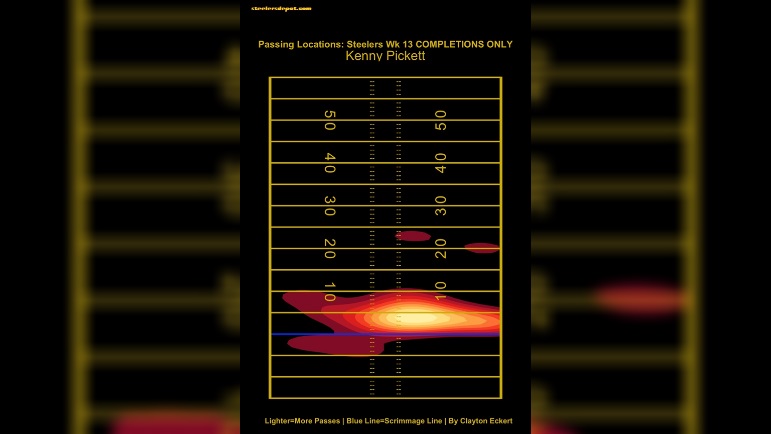 Week 13 is in the books, and it’s time to provide my quarterback passing locations charting for the game and the regular season thus far. In case you missed the previous articles, I will be charting, visualizing, and providing takeaways for the all-important quarterback position for the Pittsburgh Steelers. Thanks to Thomas Mock for his great article that helped me learn much of what I’m using today. Couple notes before we jump in. All yardage referenced are air yards from the line of scrimmage and bats at the line of scrimmage, spikes, and clear throwaways removed. This week’s charting has one throwaway removed.

Quarterback Kenny Pickett had another game in which he played to the teams’ blueprint, taking care of the football as the rest of the team has stepped up overall as the season has progressed. He went 16/28 on the stat sheet, for his lowest completion percentage of the season that highlights his up and down accuracy that I will point out more throughout the article. Pickett also had 197 yards, a nice throw and catch for a touchdown to tight end Connor Heyward who got wide open on the end zone target with explosive air yards, and encouragingly no interceptions or sacks. He did take several quarterback hits though, having to move the pocket quite a bit, and a bit antsy on a couple of occasions as the game progressed.

Couple of patterns in this game, Pickett fared very well to start the game, throwing at or between the numbers on his first six passes, and encouragingly targeted that area of the field more in general. Five explosives in this game, and interestingly four of those came in the second quarter. The third quarter included some aforementioned accuracy issues, one on an underthrow to wide receiver Diontae Johnson in the end zone for his would-be first touchdown this year, instead hitting the defender in the back. Due to game circumstance, Pickett only needed to throw the ball three times in the fourth quarter.

Team penalties, especially in the red zone limited the offense, fizzling encouraging drives with Pittsburgh moving the ball well overall. 3/8 on third down passing (37.5), including a stellar play on third and four where tight end Pat Freiermuth caught the short target at nine yards, then showcased his tough YAC ability to get down the sideline for the gain on 57 on the longest play of the year! This obviously padded the stats for the Steelers improved YAC numbers in the game, and though the improvements weren’t huge, very encouraging to see Johnson make strides in that regard. Running forward and to contact unlike much of the season which is refreshing, but want to see their connection get more consistent (50%), with Pickett having accuracy and some poor decisions on his ten targets to Johnson. The latter did have a drop on a wide open in route, a third and 11 example of a stalled drive just outside the red zone.

Let’s look at a simple view of the 27 charted passes, with number of throws at each pass distance for week 13: 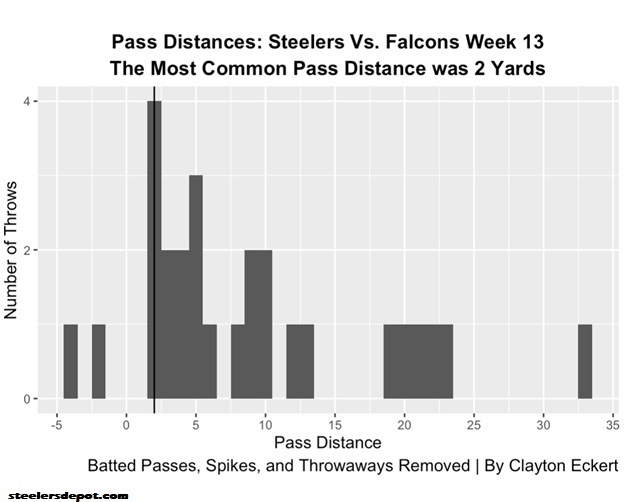 The most common pass distance was 0-5 yards, at a very high rate of 40.7%. One example was on a good YAC play from Johnson, where Pickett’s pass was high and behind but hit as he threw, securing the catch at four yards and gaining another ten. Another example early in the game was enjoyable, with Pickett reading and going through his progressions well with a good throw to Freiermuth on the five yard out route, matching that total in YAC on the third down conversion. Notable for a different reason, the last pass of the third quarter was on a comeback, making the throw as he slid right to wide receiver George Pickens for the two-yard gain and only catch on two targets. Two other tide changing plays in a game full of weird play outcomes, first an angle route to running back Benny Snell at two yards, getting good YAC for a gain of 11, along with a horse collar tackle making it and explosive play of 25 that put them in the red zone. The other was a roller coaster to start the fourth quarter, with a nice throw on the run to Johnson that was originally called a catch and fumble, but debatably though thankfully overturned on a play that could have cost them the game, instead resulting in their only three and out.

After being the most common distance the previous three weeks, 5-10 passes come in second at 33.3%. Game circumstance has a lot to do with this, with the team never trailing and able to play within Pickett’s strengths in the short pass game overall. On example in the first quarter was to Freiermuth on a dart on a pass between two defenders to pick up nine yards, just enough for the third and eight conversion. Pickett had an overthrow in this range to Pickens on a corner route and a low throw to Johnson that hit the turf, along with a wow throw on the run to wide receiver Steven Sims on the sideline that was unfortunately negated with him going out of bounds prior to the would-be catch. Pickett also hit one for a big chain mover at the two-minute warning to close the game on a slant to Johnson, again with positive YAC against off coverage move the chains and seal the victory.

He did throw further downfield too, highlighted by his 18.5% explosive passes, a big uptick compared to last week (3.6%) and the third ranked pass distance of the week and returning to similar totals of prior weeks (18.9, 15.4). The most enjoyable other than the touchdown was on a great throw and comeback route by Johnson, getting great separation on the sideline for 20 yards. 14.8% of passes went 10-15 yards, which matches last week’s total and the uptick since the bye week. The accuracy has been the tough part though, with no completions at this range in the game. Slight uptick in 15-20 yard passes to 7.4%, which was 7.1 in the previous game and ending a negative trend since the bye. One was a great pass up the seam to Sims at 19 yards, seemingly making the grab but unfortunately overturned and incomplete. Behind the line passes tied for the least common distance (7.1%), which has been very up and down this season, ranking third in week 12 (25%) and 8.1 the game before.

Here are the dots for the charted throws for week 13 as we add more context: 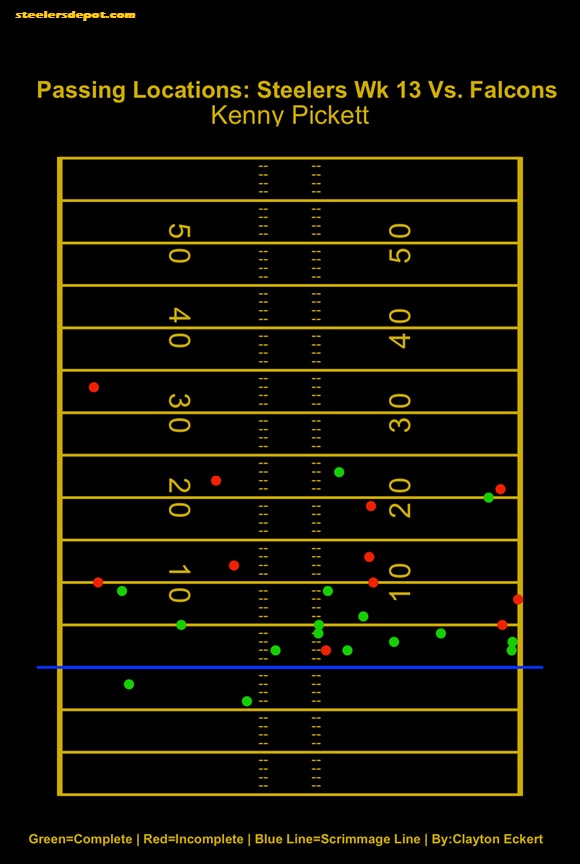 Middle of the field passes (at or between the numbers) jump out right away with 16 of them, encouragingly going 10/16 (62.5%), but only 1/6 at 10+ yards (16.7%). Love the increased frequency, but as I’ve been saying, the quantity doesn’t matter if the catch rate is poor. Overall, at 10+ yards, Pickett was 2/10 (20%) which is simply not good enough. The two completions were explosive, one encouragingly on the previously mentioned touchdown and Johnson comeback. 2/5 in explosive passes this week (40%). His longest throw of the game was at 33 yards, a poor decision/read to Johnson on the go ball into double coverage, who was thankfully able to bat away the would-be interception. The final explosive attempt I’ve yet to highlight was an overthrow to Freiermuth in the second quarter, a huge miss that likely would have been a touchdown, another example Pickett’s accuracy issues downfield and Pittsburgh’s struggles as they get near the end zone. The intermediate range was a particular struggle, going 0/5 from 10-19 yards. Pickett favored the right side of the field (hash-sideline), going 11/18 (61.1) compared to 4/8 to the left (50%). Pickett went 11/13 (84.6) on passes at five yards or less, continuing his great completion rate in this range, and really looking and hoping for improvements in the intermediate/explosive passing game moving forward. 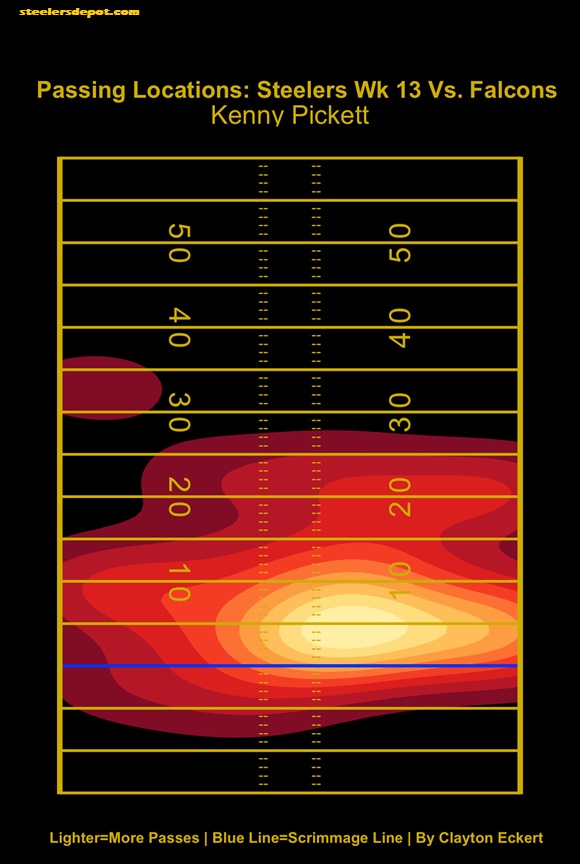 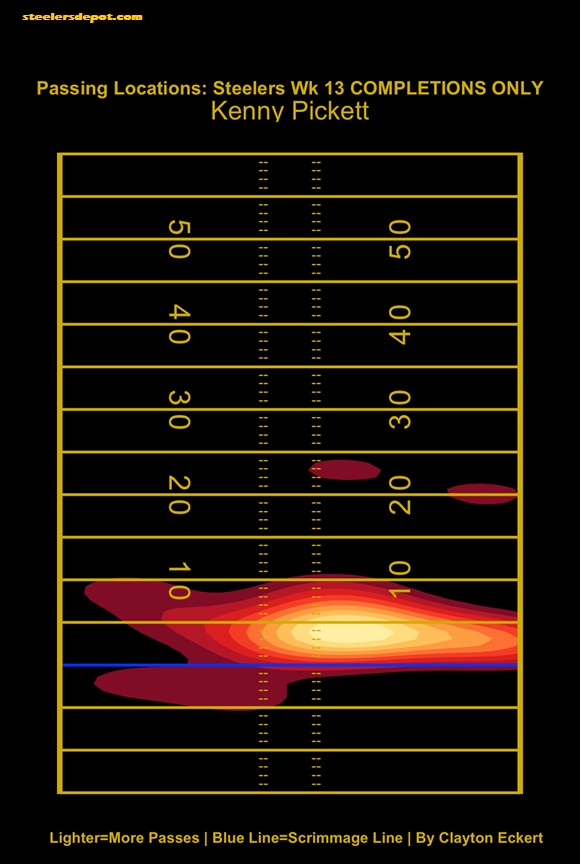 The first chart is much more encouraging than last week, but the completions only view…whew. This highlights the reliance and thankful improvements in YAC and my earlier points on the lack of connection downfield and the intermediate range dropping off entirely. Thank goodness one of those explosives went for a touchdown. The visual also highlights Pickett favoring the right side of the field, around the hash to the numbers from 2-7 yards most frequently.

Now let’s look at the 395 charted throws on the season for Pickett and quarterback Mitch Trubisky: 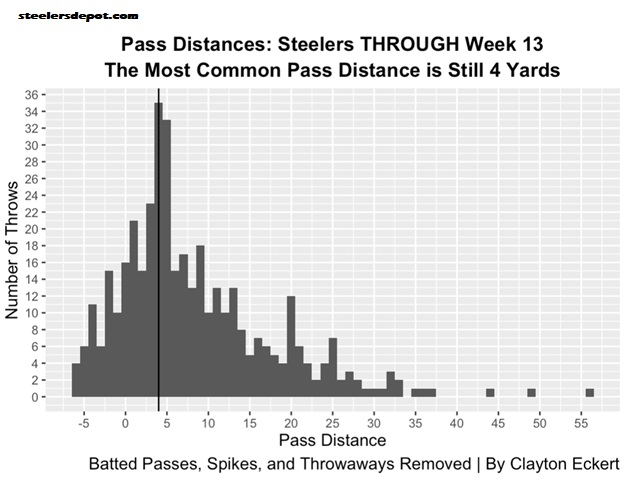 The pass distances remain in the same ranking order again this week, starting with 0-5 yard passes. The most common pass distance is now at 36.2%, a slight increase following the high rate in week 13 after dropping the past few weeks. The second most common pass distance is still 5-10 yards, but continues to climb as of late to 26.8%. 10-15 yard passes have been plateauing in recent weeks, for the same average of 14.9% as last week’s average. 14.2% explosive now, which is a slight uptick, and it will be interesting to see if the number climbs the rest of the season. Slight decrease in behind the line passes (13.2%) with only two this week. The least common pass distance of 15-20 yards is now at 9.9%, which has steadily decreased in Pickett’s playing time the last several weeks. 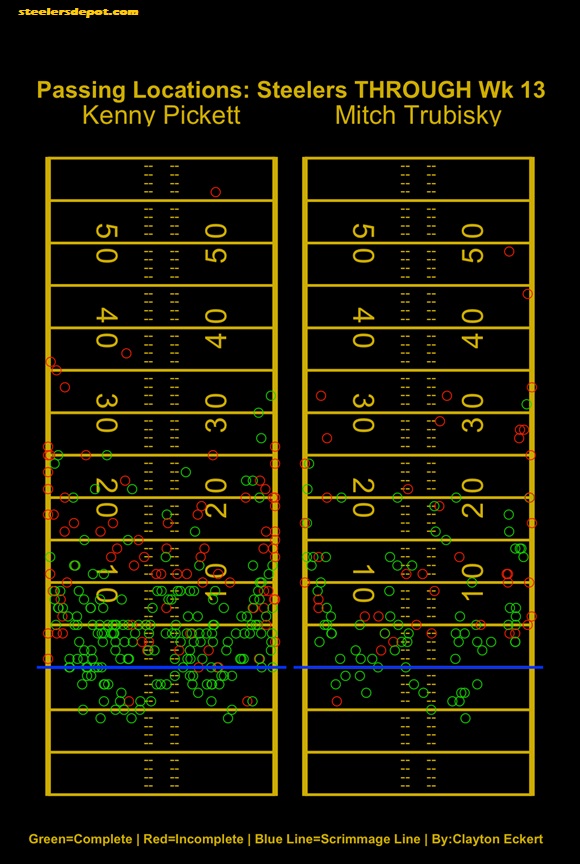 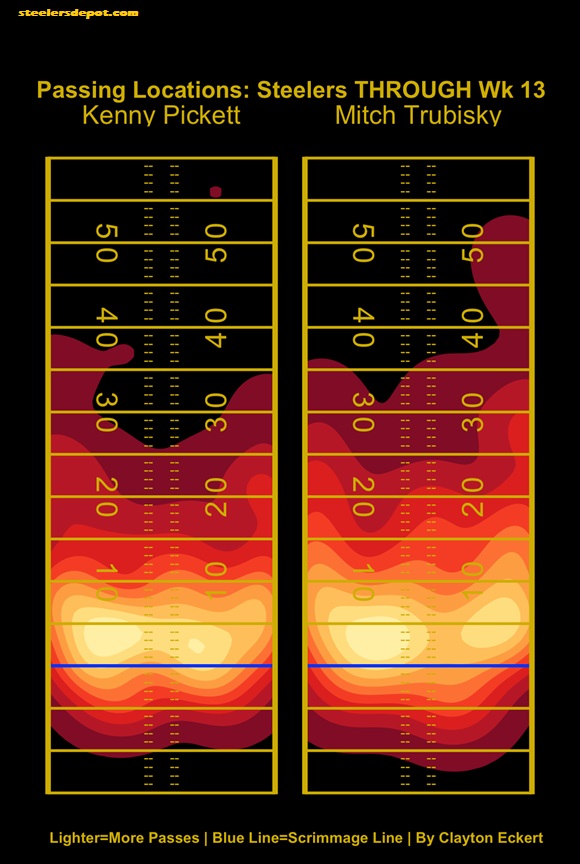 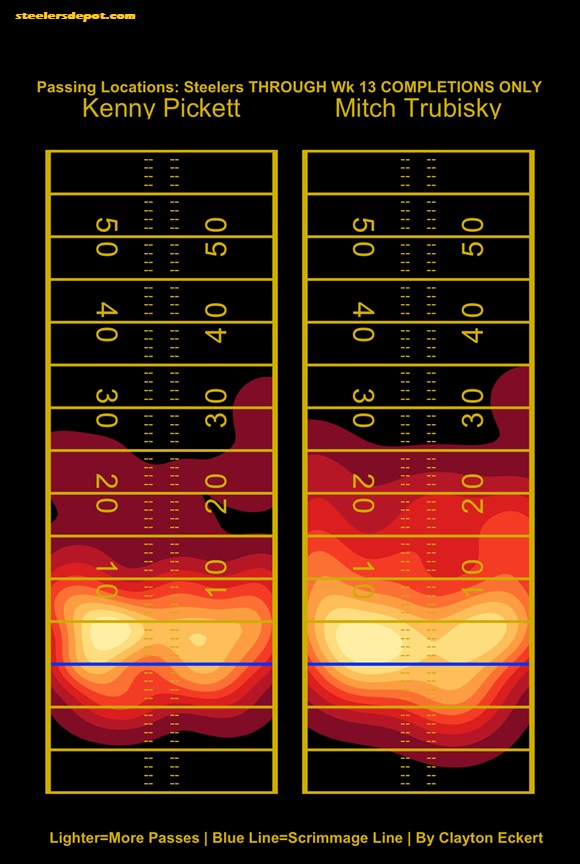 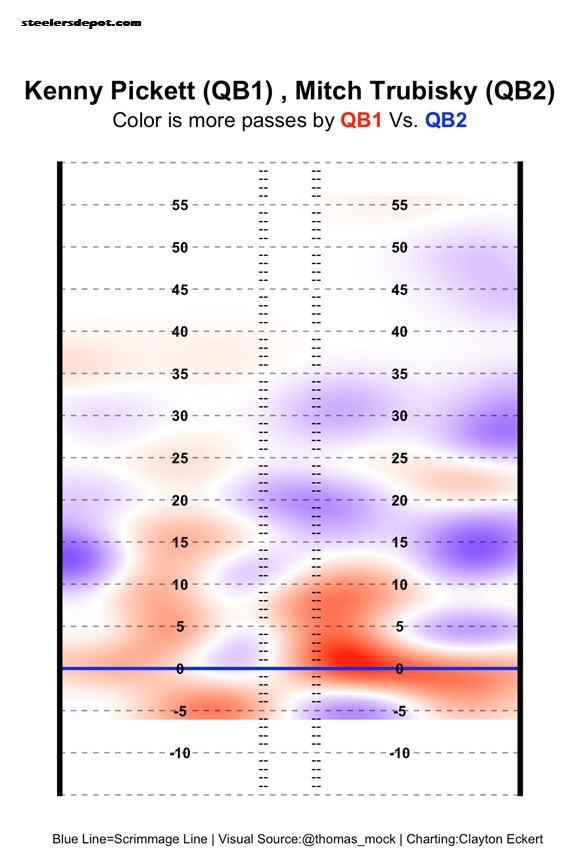 What are your thoughts of Pickett’s performance against the Falcons? What about how the Steelers quarterbacks have compared to date? Thanks for reading and let me know your thoughts in the comments!