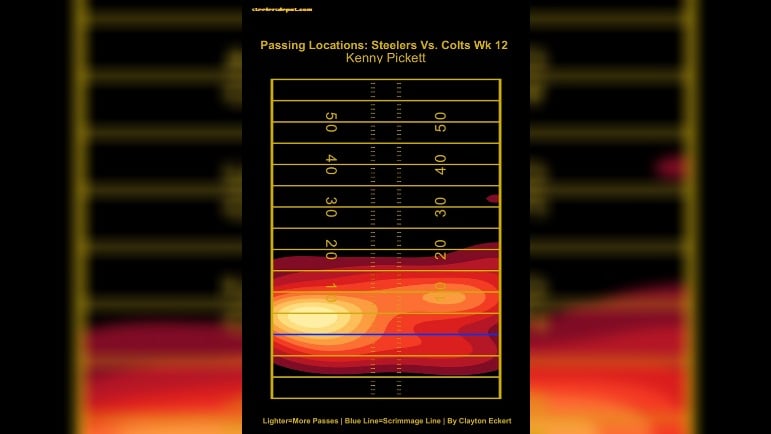 Week 12 is in the books, and it’s time to provide my quarterback passing locations charting for the game and the regular season thus far. In case you missed the previous articles, I will be charting, visualizing, and providing takeaways for the all-important quarterback position for the Pittsburgh Steelers. Thanks to Thomas Mock for his great article that helped me learn much of what I’m using today. Couple notes before we jump in. All yardage referenced are air yards from the line of scrimmage and bats at the line of scrimmage, spikes, and clear throwaways removed. This week’s charting has no passes removed.

Quarterback Kenny Pickett continues to improve in his rookie campaign, putting together his best performance on Monday night football in my opinion, and showing more consistency in a team effort game where the defense pulled their weight, along with a continued strong rushing attack allowing him to not have to do too much. Some interesting patterns in the game, particularly going hot/cold for stretches with eight straight completions mostly in the strong second quarter, and a cold stretch of five straight incompletions including an 0/3 in a rough third quarter for Pittsburgh in general.

Pickett went 20/28 overall for an excellent 71.4% and 178 yards with many accurate throws, encouragingly no interceptions or turnover worthy throws as we’ve seen recently, but also a goose egg in touchdowns. There were opportunities for them though, including the good back shoulder throw to wide receiver Diontae Johnson on second and goal in the corner of the end zone, instead hitting his hands and falling incomplete on his would be first touchdown of the season (insane this is still a thing). Wide receiver George Pickens also had a red zone opportunity on a corner route getting open in the back of the end zone, and while the pass wasn’t perfectly placed, a catchable ball he only got one hand on. The two-point conversion following running back Benny Snell’s go-ahead touchdown (that Pickett reportedly called) was an impressive play from the rookies’ in the end zone, on a scramble drill where Pickens wiggled free in the back corner, making a good throw on the move for the catch and conversion. Here’s to hoping we see more connection in the coming weeks in the touchdown variety from the red zone.

Let’s start with a simple view of the 28 charted passes, with number of throws and pass distances for week 12: 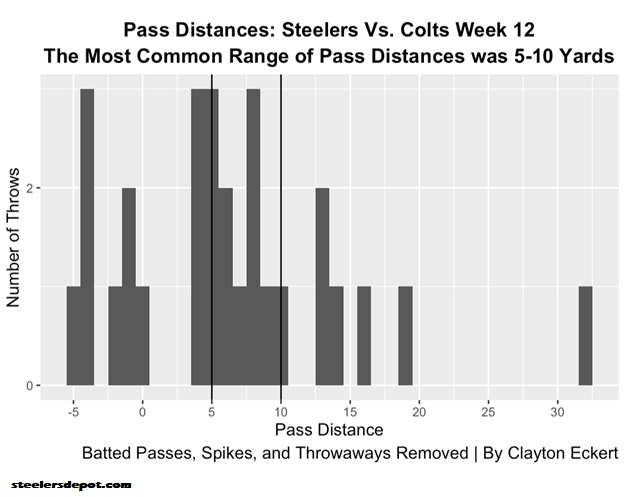 Here we get visual context to the earlier point, with Pickett not having to do too much in quantity or distance (only one explosive pass). For the third game in a row, the most common pass distance is 5-10 yards (39.3%), which is nearly seven points higher than last week as well. While Pickett’s passes are mostly in the short range, this is an encouraging trend that I hope continues, considering 0-5 yard passes tend to be the most common in the NFL. This was Pickett’s second most common distance, at 25% this week and down from 29.7 last game. Uptick in behind the line passes this week, which actually tied for the second most common distance (25%), back to a normal rate after being the least common distance the previous game (8.1%). Also, more 10-15 yard passes which is encouraging, at 14.3% compared to 10.8 and 7.7 the last two games. 15-20 passes were down this week at 7.1%, which is normally a lower number from Pickett, at 8.1 and 11.5 previously. The least common was the one explosive attempt (3.6%) compared to 18.9 and 15.4 in the previous two games. The pass was a beauty, a great pitch and catch off an aggressive first down play action go ball early in the second quarter along the sideline for the 35-yard gain.

Here are the dots for the charted throws for week 12 as we add more context: 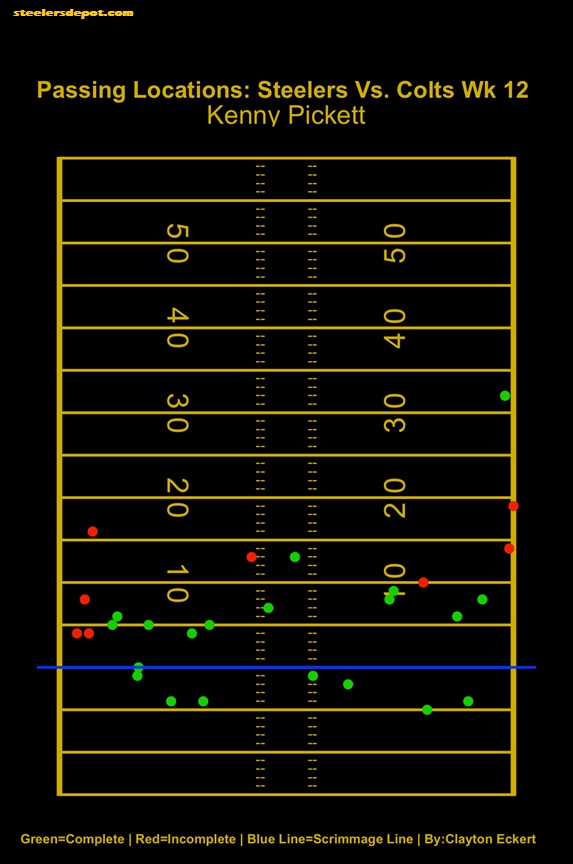 Big trends that are continuing each week, starting with Pickett’s success at five yards or less (12/14, 85.7%). He also favored the left side of the field in this range, though a bigger discrepancy last game. A play I enjoyed early was an in route to tight end Pat Freiermuth, making a great throw over the middle. The following play was an inaccurate high pass, allowing the defenders hit to jar the ball loose on the third down fail, which was one of the four incompletions to the left side. Pickett also encouragingly connected with Johnson on a slant on the right numbers, though the pass was a bit behind and tackled immediately. He has also done a good job threading the needle between defenders as of late, with one example coming in this range to Freiermuth on a good throw and catch on an out route with strong YAC for a 12-yard gain.

Struggles in the intermediate range continue, going 1/6 (16.7%) for the second straight week. Also, only two throws over the middle past ten yards, a trend we’ve grown accustomed to regardless of game situation. Both of these attempts were to Pickens late when the team was trailing, the first on a low throw but we’ve seen him make much more difficult catches. The completion was a great 13 yard catch for a huge third down conversion that included a roughing the passer penalty, making the excellent throw even more impressive and adding huge yardage to the eventual touchdown drive. With the connection on the explosive pass this week, he is 5/8 the last two games for an encouraging improvement of 63% compared to his season average we’ll get to in a bit. 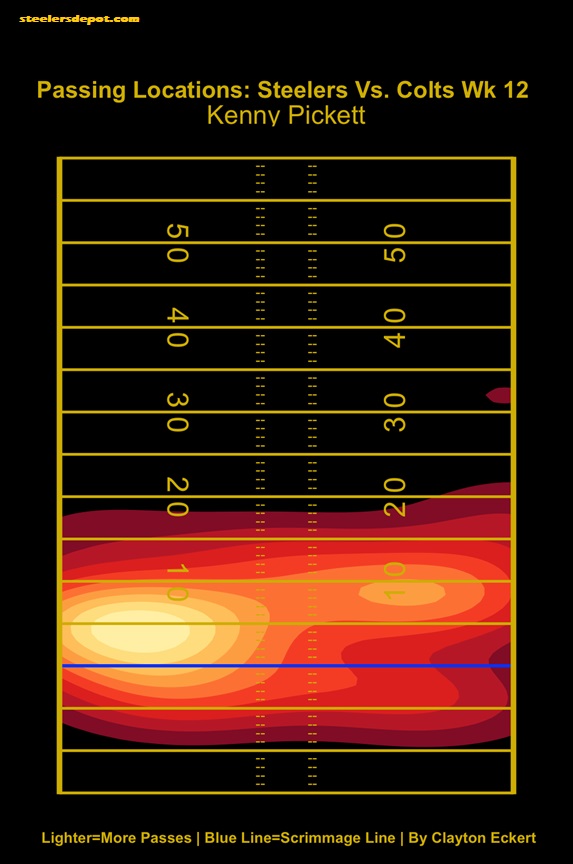 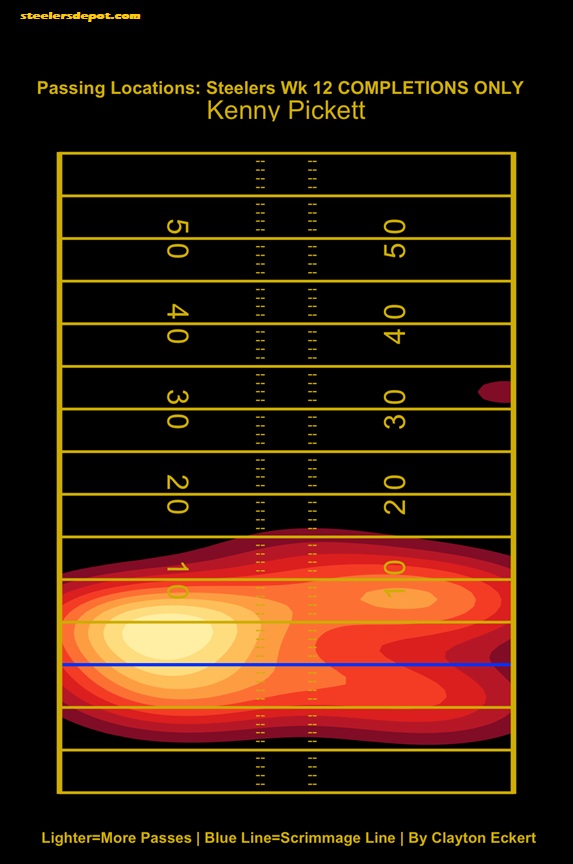 Here we get more visual context to the earlier point, with the biggest takeaway being the drop off in the intermediate range on the completions chart, particularly going 0/2 from 15-20 yards. The first was a play action overthrow to Johnson on an out route near the sideline late in the first quarter, and the other the aforementioned Pickens missed touchdown opportunity.

Now let’s look at the 368 charted throws on the season for Pickett and quarterback Mitch Trubisky: 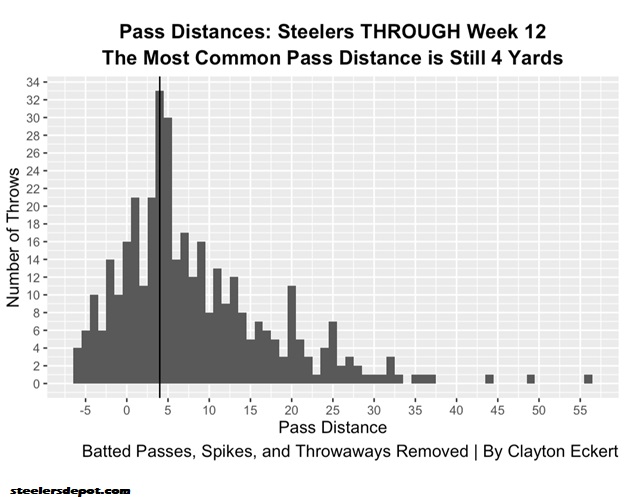 The most common pass distances remain in the same order on the season, starting with 0-5 yards. The most common pass distance is now at 35.9%, dropping steadily with the increase in 5-10 yard passes, which are now at 26.4% compared to a 25.3 season average through last week. 10-15 yard percentages remained virtually the same at 14.9%. Explosive passes took a hit with the ideal game script in week 12, now down to 13.9% compared to 14.7 previously. An increase of a full point for behind the line passes, now at 13.6%. The least common distance is still 15-20 yards, now at 10.1% which is a 0.2 decrease continuing a drop the last three games. 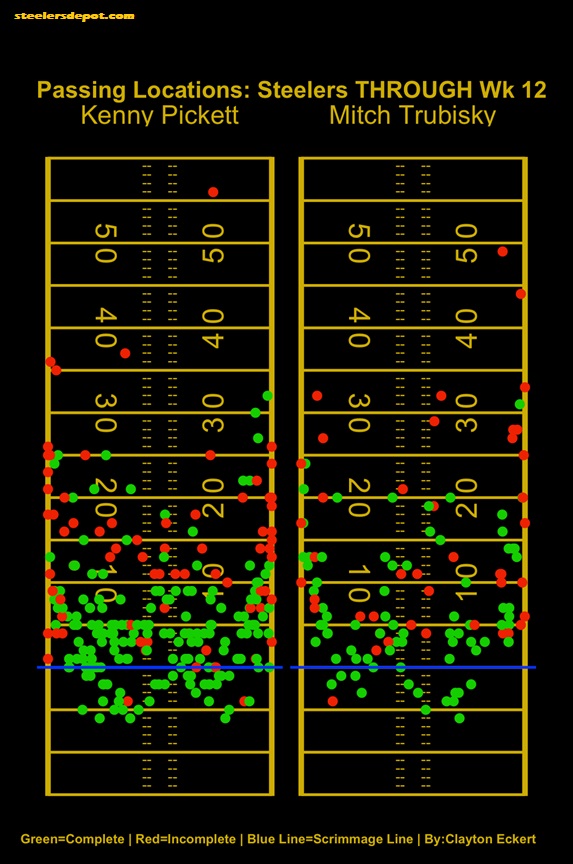 On the stat sheet, Pickett is now 175/265 for a 66% completion percentage, an uptick from last week’s season average and ranks 15th in the NFL out of quarterbacks with a minimum of 200 dropbacks. In comparison, quarterback Mitch Trubisky’s 78/128 in his opportunities earlier this season land at 60.9%, so a much stronger facet of Pickett’s game. The latter is now an excellent 112/129 (86.8%) at five yards or less, an increase from 85.1 through week 11 and much better than Trubisky’s 54/73 (73.9%). His intermediate numbers are far less flattering, now at 17/50 (34%) with a steady decline of at least two points on his season average the last two weeks. This is a big area I will be monitoring to see if he improves, which would add a great element to this team and for defenses to have to account for. This was the biggest positive difference in Trubisky’s playing time, going 23/37 for a much stronger 62.2%! Pickett has also been better in the explosive range, now at 11/29 (37.9%) compared to Trubisky’s 7/22 (31.8%) and knock on wood the formers positive trend as of late continues. 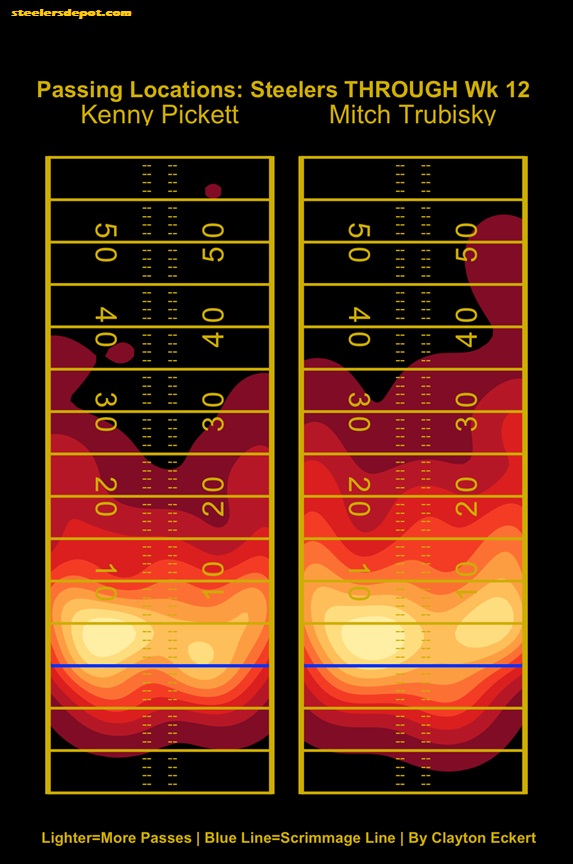 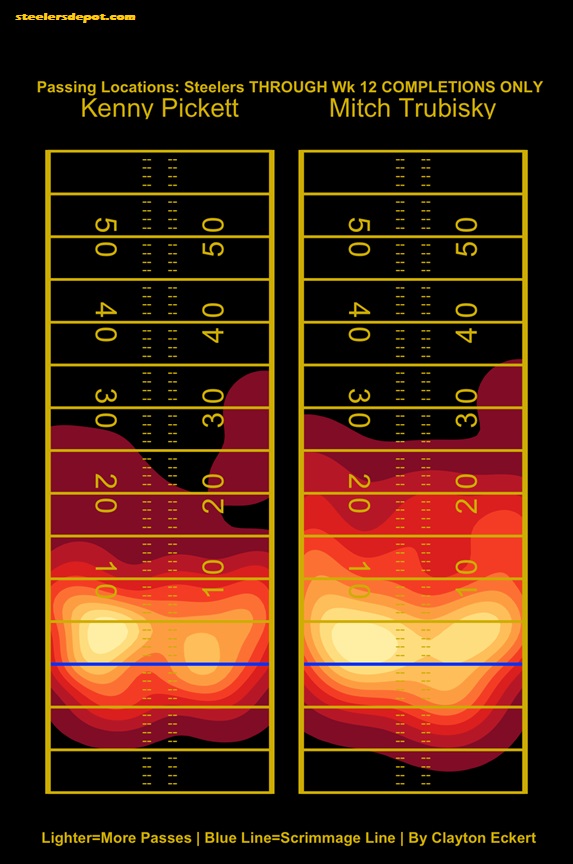 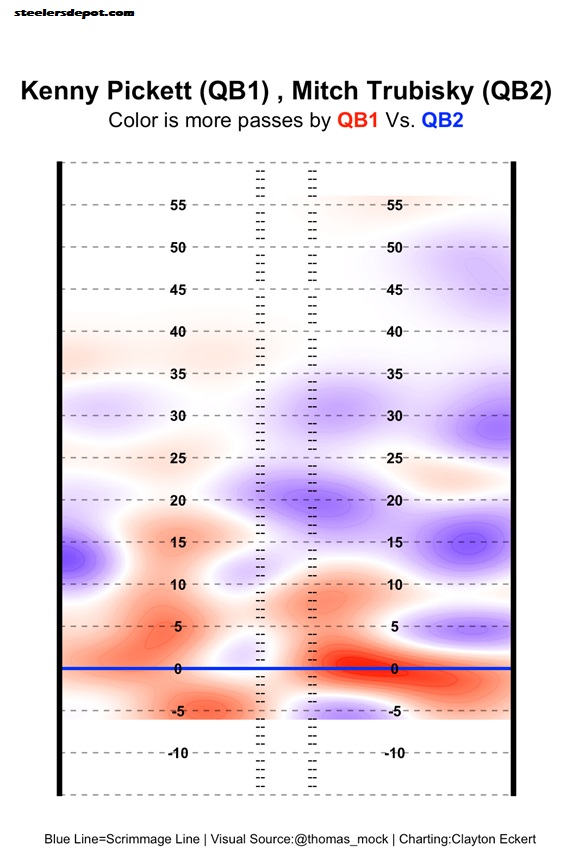 What are your thoughts of Pickett’s performance against the Colts? What about how the Steelers quarterbacks have compared to date? Thanks for reading and let me know your thoughts in the comments!