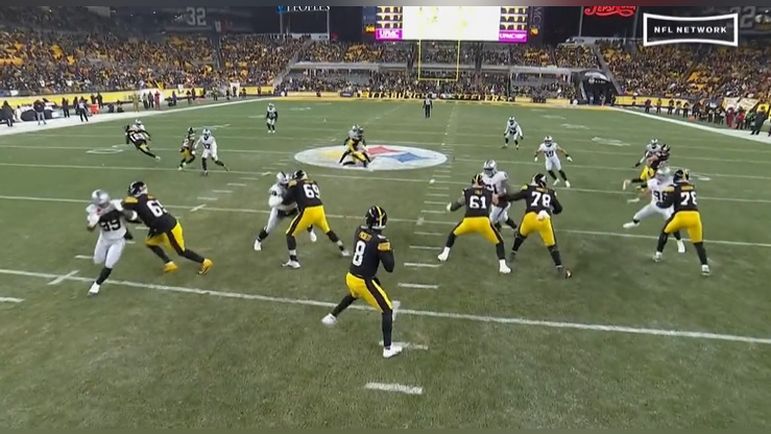 The Pittsburgh Steelers Christmas Eve Saturday night home matchup against the Las Vegas Raiders was a must-win game for more than one reason. On the night Franco Harris became the third Steeler to have his number retired after shockingly passing away earlier in the week, the Steelers also had to win to keep their playoff hopes alive. It took until the fourth quarter for the team to reach a red zone, but an elite defensive effort and a strike by QB Kenny Pickett to WR George Pickens with 46 seconds left was enough for the Steelers to beat Las Vegas 13-10.

The Raiders won the toss and elected to receive. After a four-yard run on first down, Vegas’ star running back Josh Jacobs ran for seven yards and a first down on second. Two plays later, Las Vegas picked up another first down and crossed into Pittsburgh territory on a 10-yard pass from QB Derek Carr to TE Foster Moreau. A QB Sneak by Carr later in the drive moved the Raiders to the Pittsburgh 29 and gave them a new set of downs. On 2nd and 8, DL Cameron Heyward pulled off his signature bull rush and sacked Carr, but on 3rd and 16 Carr dumped it off to RB Ameer Abdullah and he gained 17 yards to give the Raiders a first down. On 3rd and 6 a few plays later, Carr made a nice throw to WR Hunter Renfrow who caught it and made a move for a 14-yard touchdown. Daniel Carlson’s extra point was good and the Raiders took a 7-0 lead with 6:38 left in the first quarter.

WR Diontae Johnson converted on 3rd and 4 with an 11-yard reception from QB Kenny Pickett. That would be all Pittsburgh would get though, as Pickett’s completion to Zach Gentry on 3rd and 10 only gained one yard and P Pressley Harvin III came out to punt. Harvin’s punt traveled 39 yards and was downed at the Las Vegas 18.

After a completion for a first down to TE Darren Waller on the first play of the drive, the Raiders didn’t get anything else after a batted pass by Heyward on 3rd down. The Steelers would take over at their own 25. Their offense got going with a 14-yard run by RB Najee Harris on first down, and then two plays later Pickett connected with Johnson for a 15-yard gain on the last play of the first quarter. The drive stalled out after a 3rd and 2 toss to RB Jaylen Warren lost yards, and then K Chris Boswell missed a 43-yard field goal wide left.

The Steelers’ defense was able to get a stop though after they pressured Carr on 3rd and 14 and he scrambled for four yards. P A.J. Cole’s second punt of the game pinned the Steelers at their own 12, but some strong runs from Harris and an eight-yard completion to WR George Pickens on 3rd and short gave the Steelers a first down close to midfield. On 2nd and 6 two plays later, Warren rumbled for a 13-yard gain.

On 3rd and 1 later in the drive, Las Vegas DE Maxx Crosby stuffed FB Derek Watt, but the Steelers kept the offense on the field. On 4th and 1, Pickett got just enough on a QB sneak for a first down. Pittsburgh wouldn’t go much further though, as TE Pat Freiermuth dropped a pass when he was wide open that would’ve been a first down on 3rd and 8. Boswell came out for another field goal attempt but this time he was good from 44 and the Steelers cut into the Las Vegas lead, as they trailed 7-3 with 1:49 left in the first half.

On 3rd and 10 with Las Vegas at their own 44 and 32 seconds left in the half, Carr was able to hit Waller down the field for a 34-yard gain to the Pittsburgh 22. Las Vegas would get a field goal on the drive, and they went into the half leading the Steelers 10-3.

The Steelers started the second half with the ball and on 3rd and 5, Pickett threw downfield to WR George Pickens for a gain of 25 yards to the Las Vegas 35. Two plays later though, Pickett’s pass was intercepted by LB Denzel Perryman and he returned it to the Pittsburgh 47. On the next play though, the Steelers took it right back when CB Arthur Maulet caught a tipped ball and returned it 13 yards to the Pittsburgh 44.

On first down, Pickett threw a screen to Harris that went for a loss of six yards. The Steelers were able to convert a first down on 3rd and 8 when Pickett extended the play and found Johnson for 14 yards. A seven-yard run by Harris followed but the Steelers wouldn’t get another first down. Boswell went wide-left from 52 yards and the Raiders held onto their 10-3 lead.

A nine-yard completion to Renfrow on third down gave the Raiders a first down at the Pittsburgh 41. Carr turned it over again later in the drive though, when S Minkah Fitzpatrick got his fifth interception of the season.

The Pittsburgh offense did nothing with the sudden change, going three-and-out. The Raiders converted on 3rd and 9 with an 11-yard completion to Renfrow. A 36-yard run by Jacobs was wiped out due to a facemask on Moreau, and on 3rd and 12, Highsmith sacked Carr for a loss of 13 and the Raiders punted. Cole’s punt only went 29 yards and the Steelers’ offense took over at their own 45.

A 17-yard catch-and-run by Harris that included an incredible hurdle moved Pittsburgh into Las Vegas territory at their 27, but a hold against Kevin Dotson knocked the Steelers back another 10 yards. On 3rd and 5, Pickett was able to escape the pocket and complete a first down pass to Warren for a gain of seven. On 3rd and 9 from the Las Vegas 34, the Steelers threw short of the sticks and gained just two yards to Pickett. Boswell hit a 40-yard field goal try, and Pittsburgh trailed 10-6 with 9:47 left in the fourth quarter.

Two plays after a Vegas first down completion to WR Mack Hollins, Heyward got to Carr and sacked him for a 10-yard loss and the Steelers defense got off the field with a third down stop. With 5:56 left, they would look to score their first offensive touchdown with their drive starting at their own 21. The Steelers would go three-and-out, and the Raiders got possession back with 4:32 left at their own 24. They responded with a three-and-out of their own, so the Steelers would get another chance.

A five-yard completion to Harris on first down was followed by a 17-yard catch-and-run by Freiermuth. A 10-yard completion to Freiermuth moved the chains again on the next play. After Harris got a hand on the ball that would’ve saved a sure interception, Pickett dumped it to him for a 19-yard gain. With 1:05 left, Harris got out of bounds after a gain of five at the Las Vegas 19. The next snap was the Steelers’ first from the red zone all night, and Harris dropped the pass to set up 3rd and 5. On 3rd down, Pickett hooked up with Freiermuth for a gain of four. On 4th and 1, the Steelers ran a QB sneak and got the first down. The next play, Pickett fired over the middle to Pickens for a 14-yard touchdown, and the Steelers took a 13-10 lead after Boswell’s successful extra point. The Raiders would have 46 seconds left to win or tie.

With 29 seconds left, the Steelers essentially clinched the win when Cameron Sutton picked off Carr’s pass intended for Hunter Renfrow. The game ended with Connor Heyward taking a jet sweep 21 yards for a first down that ran the clock out

The Steelers moved to 7-8 with the win and keep their playoff hopes alive.