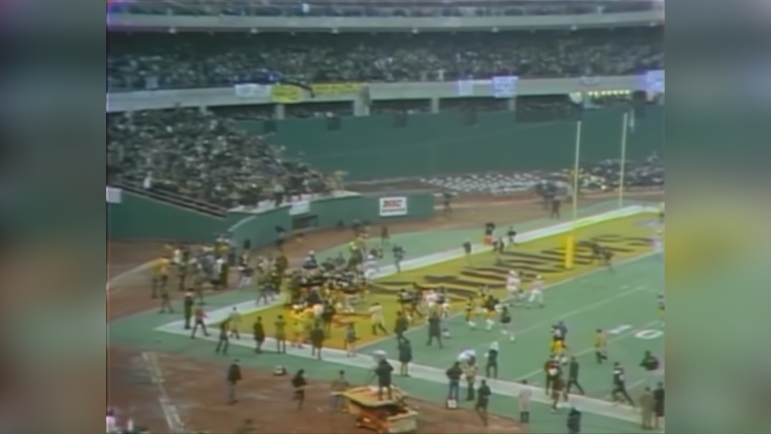 The Pittsburgh Steelers’ number one priority on Saturday is to try to win the game against the Las Vegas Raiders. But it’s also a day to celebrate the greatest play in NFL history, and to honor the memory and legacy of the man responsible for it.

Running back Franco Harris’s sudden passing overnight yesterday shocked the world, with people from all walks of life sharing their memories and condolences. The Steelers are set to retire his jersey as they celebrate the 50th anniversary of the Immaculate Reception.

He should be there. He won’t be, at least in the flesh, but the game will still have a throwback feel. Not only are they bringing back the old-style block number uniforms, it’s been reported (by the Pittsburgh Clothing Company) that they are painting the end zones to match the way that they looked on December 23, 1972, the day of the Immaculate reception.

The company’s Twitter account posted images showing the work in progress, with big black lettering behind a yellow base, with the AFC logo on one end and the NFL shield on the other. That’s what it looked like when Franco crossed that goal line, as you can see in the header image.

Photo sent from one of the Acrisure Pigeons.
Apologies for the quality, apparently pigeon phones don't have very good cameras. pic.twitter.com/kzhv2OQgCR

It’s just one more small way to make the day a bit more special, though, as with Harris’ absence, it can never be quite the same. We are a stadium and two names removed from Three Rivers across the way from what is now Acrisure Stadium.

Now stands a monument at the spot where Harris caught the ball on the Immaculate Reception commemorating the franchise-altering play. It’s come to serve as a makeshift memorial site over the past 24 hours, along with the statue at the Pittsburgh airport.

Likewise, this is a 6-8 team standing deep in the shadow of the first seeds of that legendary 70s dynasty. The Steelers went 11-3 in 1972 and played in the conference finals. Pittsburgh could be mathematically eliminated from postseason contention and secure a losing record with two games left to play.

The Immaculate Reception is a reminder of better times for Steelers fans. Chances are it will never be like that again. The game simply isn’t set up to produce those kinds of results anymore with free agency and the universality of scouting today.