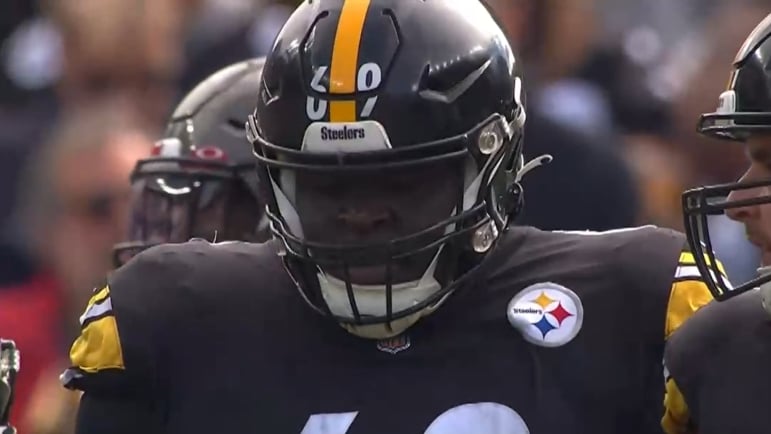 The Pittsburgh Steelers unsuccessful draft of 2020 is currently hurting the team and its effects may still be felt a few years down the line. General manager Kevin Colbert and head coach Mike Tomlin chose to go all out for one last Super Bowl run with former quarterback Ben Roethlisberger instead of trying to build up for the future. This resulted in no playoff wins and a lot of holes to fill in the upcoming couple of drafts.

The Steelers had six draft picks in the 2020 draft after trading their first rounder away for Minkah Fitzpatrick (this was a good move). Of their six draft picks, only Alex Highsmith is likely to be a long term starter and it is possible he is the only one to receive a second contract.

The Steelers six picks were: WR Chase Claypool, OLB Alex Highsmith, RB Anthony McFarland Jr., OG Kevin Dotson, S Antoine Brooks Jr,. and DL Carlos Davis. Claypool has been traded, Brooks Jr. is out of the NFL and only played in four games for Pittsburgh, and McFarland and Davis have been on the practice squad for most of the season. Only Highsmith and Dotson have realistic chances to get second contracts from Pittsburgh, and the team will likely look to upgrade from Dotson at the guard position in an upcoming draft.

While Highsmith has turned out to be a great player, overall this draft has hurt the future of the Steelers. While Claypool had a good rookie season, he never built on it and was eventually traded for a second round pick. Dotson’s best season was as a rookie when he filled in due to injuries on the offensive line. He has not progressed too much over his three seasons in Pittsburgh and is part of the weaker left side of the offensive line.

The two really maddening picks were Claypool and McFarland. The Steelers did not really need a receiver at the time, especially with their first pick. Jalen Hurts was still on the board at the time and Colbert could have drafted him as a succession plan for Roethlisberger who was about to enter his 17th season. Instead they tried giving him a weapon which just did not work out. While Hurts may not have become what he is currently as a Steeler, the team knew Roethlisberger’s career was coming to a close soon and could have had a quarterback who needed a year to sit anyway, learning from Roethlisberger. This was also coming off the 2019 season where Mason Rudolph got benched for Devlin “Duck” Hodges midseason, they knew he was not going to be the team’s next franchise QB.

The more egregious pick was McFarland. The team had just drafted a running back in Benny Snell Jr. the year earlier and still had James Conner on the roster. In fact, the Steelers drafted Najee Harris with their first round pick the next year which made this pick even worse. McFarland never really got a fair shot at the running back position, which made this pick infuriating.

Colbert and Tomlin knew they needed to start rebuilding their offensive line with Ramon Foster retiring that offseason and Maurkice Pouncey and David DeCastro getting older and their play declining. They took one offensive lineman in 2020 and the next two seasons the team had some of the worst offensive line play in the league. It didn’t help that both Pouncey and DeCastro were not on the team for the 2021 season.

Going into the 2023 NFL draft the Steelers have a lot still to address, offensive line, defensive line, and cornerback to name a few. However, this list may not be as long if Colbert and Tomlin started to try and build for the future in 2020 instead of trying to rev up the team for one last run.