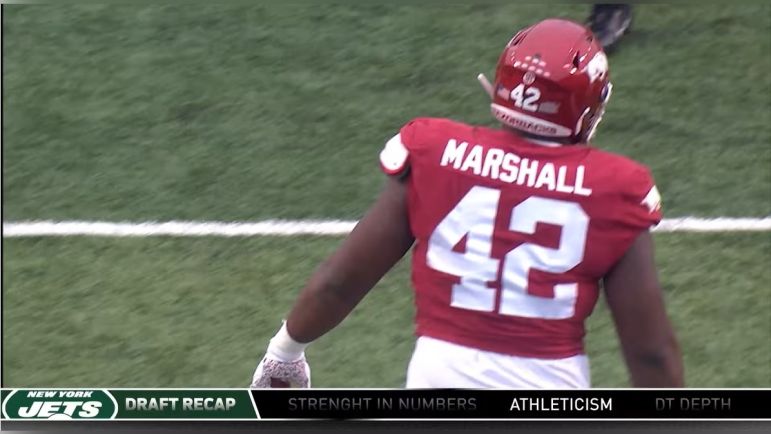 The Steelers are signing DT Jonathan Marshall off of the Jets’ practice squad to their 53-man roster, per source. He entered the league as a 2021 sixth-round pick out of Arkansas.

As Yates notes, Marshall was the Jet’s 6th round selection in last year’s draft. As a rookie, he appeared in four games, making two tackles. Listed at 6’3, 310 pounds with 32 1/4 inch arms out of Arkansas, he recorded 35 tackles (6.5 TFL) and a sack in his final season for the Razorbacks.

Per Draft Bomb’s Kent Lee Platte, Marshall had an elite 9.99 Relative Athletic Score (RAS) coming out of college, making him one of the most athletic players relative to his size and position over the last 35 years.

So far, Marshall had yet to appear in a game in 2022. He flashed as a rookie in the preseason as highlighted by these clips.

Because he was poached off the Jets’ practice squad, he will essentially have to remain on the roster for at least the next three weeks. He replaces Chris Wormley, who suffered a knee injury in Sunday’s loss to Baltimore. Mike Tomlin said Tuesday Wormley needs surgery and it’s almost certain he’ll be placed on IR as a corresponding move.

#Steelers DE Chris Wormley tore his ACL and is out for the season, source said. Coach Mike Tomlin called the injury “significant.”