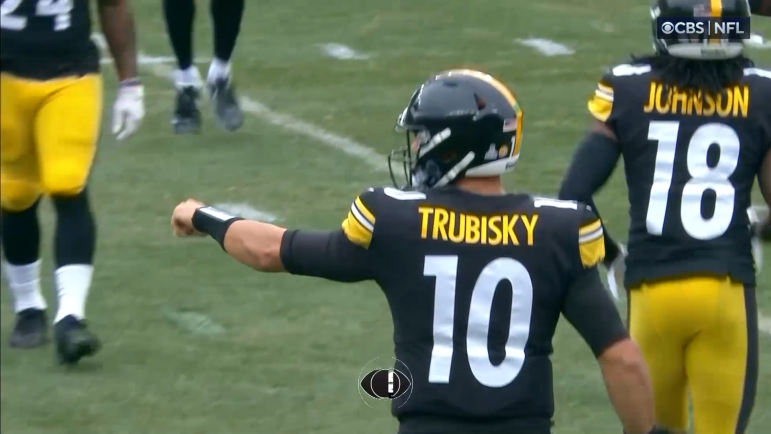 The Pittsburgh Steelers have not yet officially announced who their staring quarterback will be on Sunday against the Carolina Panthers but Saturday morning media reports indicate it will be Mitch Trubisky.

According to Gerry Dulac of the Pittsburgh Post-Gazette on Saturday, Trubisky will start against the Panthers on sunday in place of rookie quarterback Kenny Pickett, who is listed as doubtful on the injury report with a concussion after being limited in practice on Wednesday, Thursday and Friday.

Mitch Trubisky will start at QB in Carolina, per team source

Trubisky has served as the team’s backup quarterback since being benched for Pickett in Week 4. But with Pickett sidelined by a concussion suffered in Sunday’s loss to the Baltimore Ravens and Trubisky throwing three picks in relief, the Steelers said there was an open competition between him and Mason Rudolph.

The two quarterbacks split team reps throughout the week. But ultimately, it seems like the team is sticking with Trubisky, who will earn his fifth start of the year and his first since Week 4, a loss to the New York Jets in which the veteran was benched at halftime.

On the season, Trubisky has completed 63.3% of his passes with four touchdowns and five interceptions. Signed by the Steelers to a two-year deal in the offseason, he worked as the team’s #1 throughout the spring and summer and opened the year as the lead guy. But Pittsburgh quickly went away from that plan after losing to the Jets at halftime, leading to an argument between Trubisky and WR Diontae Johnson. Owed a large base salary next season, this could potentially be Trubisky’s final start with the Steelers.

Pittsburgh will take on Carolina on the road tomorrow at 1 PM/EST. Both teams enter the game 5-8 but the Panthers are in the middle of the NFC South race. Meanwhile, the Steelers will need a win (or tie) to avoid Mike Tomlin’s first losing season and the team’s first since 2003.

UPDATE: The Steelers have now made this official. Trubisky will start on Sunday against the Panthers and he will be backed up by Mason Rudolph. Rookie quarterback has also now been downgraded to out on the injury report as of Saturday afternoon.