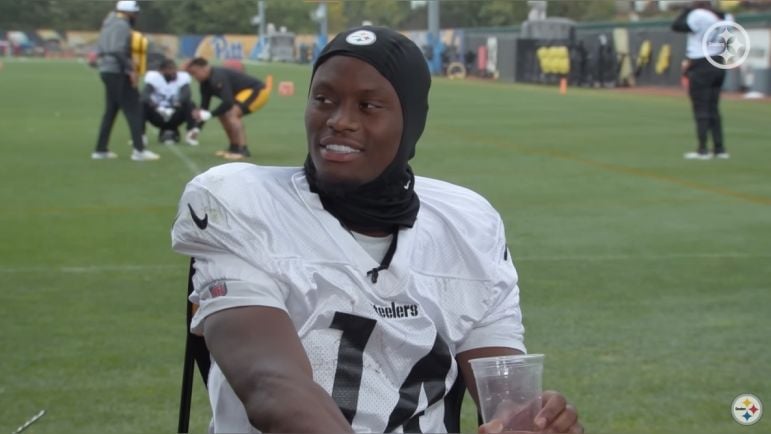 The Pittsburgh Steelers will be taking on the Las Vegas Raiders on Saturday night in a game which will be bitterly cold. According to AccuWeather forecast, temperatures at kickoff will 11 degrees with a 40% chance of snow. If that is not bad enough, when factoring in the wind, the RealFeel will be -10 degrees.

When meeting with the press today, quarterback Kenny Pickett was asked what his plans are to stay warm.

“I don’t know, you can’t prepare for that really, you know, seven degrees, whatever it’s gonna be; just go out there and play,” Pickett sad in a video posted to Twitter by Brooke Pryor. “I’ll wear like a thicker thermal and maybe put on a ski mask. I’ll ask George [Pickens] which one he prefers. I’ll rock the same one GP’s rocking and we’ll be good to go.”

It’s going to be in the single digits at kickoff Saturday night, with a windchill below zero.

Kenny Pickett says he’s going to wear a thicker thermal and also ask George Pickens what ski mask he recommends and wear the same one. pic.twitter.com/01lmwNBZDt

Wide receiver George Pickens has been known to wear a ski mask no matter the weather for esthetic purposes. While he did not always wear it at Georgia, he was wearing a silver balaclava in his viral draft video where he reacted to himself getting drafted. Since then, a ski mask/balaclava has been Pickens’ most notable fashion accessory on and off the football field, with him even showing up to games in a ski mask/balaclava.

And he made it clear since being drafted it would be part of his NFL wardrobe.

Steelers Rookie wide receiver George Pickens on wearing the silver balaclava all the time: "Oh yeah, that's a montage or a model that I'll be wearing. You'll definitely be seeing more of it later on." #Steelers #NFL

Pickett, a New Jersey kid, should be used to the cold weather. However, since starting his collegiate career at Pitt in 2017, he never played in an outside December game, only playing in either Bowl games or a conference game in the South.

With that being the case, some may wonder how Pickett will fair in the cold weather. With how advanced heating is on sidelines and all the great equipment NFL players have available to them nowadays it should not be an issue.

Pickett was also asked if he has ever played in a game this cold before.

“Maybe the teens,” Pickett replied. “I don’t know if I’ve ever hit single digits, I don’t know how that much you feel much of a difference, but I’m sure the wind will be a little bit of a factor. But, we’ll see. Excited to see what it feels like.”

Pickett raises a good point in that if the temperature drops to eight degrees, it honestly isn’t going to feel much different from 15 degrees, especially considering the game is taking place at 8:15 p.m. and there will be no sun to warm things up. The wind will the biggest factor with wind gusts expecting to be at 29 mph.

With the weather being down right awful on Saturday, it will be hard for Pickett to have a huge game. As long as he does not turn the ball over it will be a success. For the Steelers to win in a game with this type of weather they will have to rely on their defense and rushing attack and hope for their quarterback to not shoot them in the foot with turnovers. If he can take care of the ball we can call it a successful outing for Pickett.