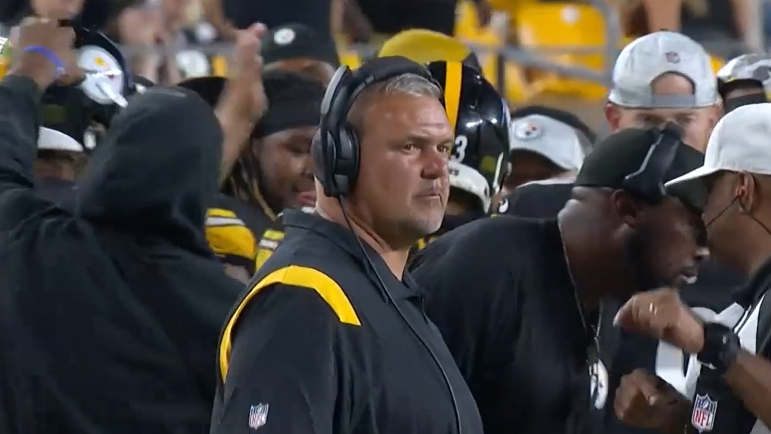 When the Pittsburgh Steelers beat the Carolina Panthers 24-16 on Sunday at Bank of America Field in Charlotte, N.C., it was a reunion for many guys on the team, including defensive lineman Larry Ogunjobi and outside linebacker Alex Highsmith, both of whom grew up in the area. It was also a bit of a reunion for offensive line coach Pat Meyer, who spent 2020 and 2021 as Carolina’s offensive line coach before getting fired after the 2021 season. Offensive tackle Trent Scott also spent 2020 and 2021 with Carolina, and offensive tackle Dan Moore Jr. said that both Meyer and Scott were key in helping the Steelers’ offensive line block Carolina as well as they did.

“It was huge,” said Moore. “(Pat) knows those guys in and out. Trent was a big help as well. He was on their team for two years. Personnel wise Trent helped us out a lot. Schematically Pat was a huge help for us,” Moore told Teresa Varley of Steelers.com.

It was one of the best games of the year from the offensive line, and definitely the best game from the left side of the line that includes Moore and offensive guard Kevin Dotson. Pittsburgh continually found success running to the left, especially in the first half, as Moore and Dotson routinely made the right reads and had good blocks to spring both Najee Harris and Jaylen Warren free.

It was the type of performance out of the offensive line that you would’ve been shocked to see in August, but as guys get more and more comfortable with Meyer’s scheme, one we’re beginning to see more often. The familiarity that both Meyer and Scott, Pittsburgh’s swing tackle who came in when the Steelers wanted to run some heavier sets on Sunday, have with Carolina certainly helps. The idea that having a coach going against his former team gives his current team a leg up usually doesn’t translate on the field, but it seems as if it made a real impact on Sunday.

Obviously, Meyer nor Scott are too far removed from their tenure in Carolina, and the team didn’t have too many personnel changes defensively. Former defensive coordinator Steve Wilks is now the team’s head coach after Matt Rhule was fired earlier in the season, but the lack of defensive change in Carolina clearly played into Pittsburgh’s hands as Meyer was familiar with the defense and the front seven his offensive line was going up against.

It’s still early, but it seems as if the Steelers made a good decision to hire Meyer. It looked ugly in the preseason, but as the season’s gone on, Pittsburgh’s offensive line really hasn’t looked all that bad. They’ve ran the ball for over 100 yards in five of their six games coming out of the bye, and they’ve only surrendered three total sacks in the last three weeks.

A unit continuing to improve as the season progresses is usually a sign of good coaching, and this offensive line group has certainly continued to do so. While they still aren’t a great unit, and there will likely be a change or two made personnel-wise this offseason, Meyer has done a solid job of working with what he has, and it sounds as if he really made a major difference in Sunday’s win.