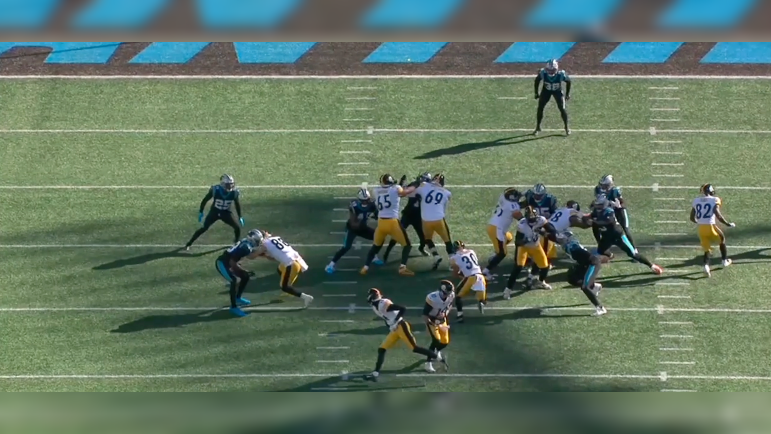 After butting heads and rarely getting along throughout the terrific movie “Remember the Titans,” All-American linebacker Gary Bertier and star defensive end Julius Campbell — after a long, grueling night of practice illuminated by the headlights of vehicles — came together in a memorable scene.

You should all know what I’m talking about.

That was the moment the Titans became the Titans.

Maybe that moment occurred for the Pittsburgh Steelers offensive line on Sunday inside Bank of America Stadium against the Carolina Panthers as left tackle Dan Moore Jr., left guard Kevin Dotson and center Mason Cole had a day to remember themselves, dominating at the point of attack throughout the matchup in the running game, helping lead the Steelers to a convincing 24-16 win over the Panthers to move to 6-8 on the season.

On the day, the Steelers ran the football 45 times, tying the most ever in the Mike Tomlin era in a single game. Of those 45 carries, the Steelers a the ball 19 times behind Moore Jr., Dotson and Cole off the left side to the tune of 66 yards and a touchdown, according to Pro Football Focus.

Najee Harris carried the football 14 times for 53 yards and a score, while Jaylen Warren added four carries for 11 yards and Derek Watt had one carry for two yards off the left side of the line in the win.

That might not look great on paper overall, but much of that damage came in the first half off the left side, where the Steelers had great success, especially on the first drive of the game leaning heavily on Harris in the ground game.

While the left side of the line in Moore and Dotson have been much-maligned throughout the season for their struggles with penalties and pass protection, the duo overall has played some sound football from the run blocking perceptive. They showed up in a massive way Sunday against the Panthers.

First play of the game for the Steelers, they run duo with Cole and Dotson against standout Carolina defensive tackle Derrick Brown with Moore kicking out edge rusher Brian Burns. Cole and Dotson don’t get much movement on Brown at all, but it’s the play Dotson makes getting off the combo block quickly to pick up safety Jeremy Chinn working downhill into the hole that makes this run successful.

Though Brown eventually makes the stop on Harris, the Steelers running back is able to pick up a few yards on the play due to Dotson’s great awareness and athleticism to get off the block and get a hat on a hat.

Still on the first drive, facing a second and seven, the Steelers run the read-option out of gun with Harris and Mitch Trubisky. Tight end Zach Henry is aligned outside of Moore Jr. at left tackle and is supposed to land the downblock, allowing Moore and Cole to get outside on the move.

Gentry whiffs as Yetur Gross-Matos sees it coming and sidesteps it. Credit to Cole and Moore though for recognizing it and getting a hat on the free defender. Moore gets a quick initial punch on Gross-Matos, slowing him down just enough for Cole to hook him inside. Moore then does just enough on linebacker Shaq Thompson to give Harris a lane to the sideline, where he’s able to move the chains.

Later in the drive on a second and seven again, the left side of the line works perfectly in tandem with each other, sealing off the Panthers’ defense for Harris to have a ton of space off left tackle.

Moore does a good job of hooking Gross-Matos inside and holding him up long enough for Dotson to get there for support inside. Cole does a tremendous job reaching defensive tackle Matt Ioannidis, who is aligned outside of Dotson on the play. Dotson is able to get a hand on Gross-Matos and remain engaged with Ioannidis until Cole can take over. All three work well together in tandem, sealing off the left side of the line, giving Harris the corner for the first down.

These types of plays simply weren’t happening earlier in the year, but the more and more they work together and gel, the more they are showing up on tape.

Then, of course, there’s Harris’ touchdown to cap off the first scoring drive of the game. It came, unsurprisingly, off of left end.

Using Trent Scott as an extra lineman in the jumbo package with Gentry and tight end Pat Freiermuth aligned, it’s pretty clear where the Steelers wanted to run the football.

The line up front did a good job of folding in the Panthers’ right side of the defense, leaving Harris one-on-one in space against Chinn, whom he beats relatively easy with a stiff arm, allowing him to get into the end zone. Cornerback Keith Taylor Jr. wanted no part of Harris in the open field, either.

Good design, good execution all around.

On Pittsburgh’s second drive of the game, the left side of the line kept it rolling.

Very similar to the first play of the game, the Steelers run off left tackle with Harris. Dotson does a god job again of winning at the point of attack long enough to allow Cole to climb to him, and then passes the defensive tackle off before then trying to take the pass off from Moore.

Moore, like Dotson earlier, does a great job of peeling off in time to pick up Thompson in the hole, creating a seam for Harris to get through to pick up positive yards on the play. It’s not pretty and it requires a lot of communication and overall familiarity with the guys next to you for this type of pass-off to work. The Steelers did it really well Sunday.

This was my favorite rep of the day from the left of the offensive line.

Dotson absolutely folds Brown in on the powerful down block. He has great balance and awareness on the play and slides off of it to clobber Thompson at the same time as Moore, who did a great job climbing to the second level with force. The ability to move Brown quickly and then pick up Thompson in the hole gave Jaylen Warren a big lane to knife right through the heart of the Panthers defense.

A few plays later on the same drive, the left side of the line was a runaway train agains the Panthers’ front.

Look at the movement Moore, Dotson and Cole get on the run. Dotson takes Gross-Matos from inside the hashmarks to nearly the numbers, with some help from Cole. Cole then does a good job getting a hat on Thompson too, allowing Warren a huge lane to cut up inside and get near the goal line.

While this group has been questioned throughout the season and has been labeled as an area the Steelers must upgrade, if Pittsburgh truly wants to be that ground-and-pound team in this era, they need to continue to let guys like Moore and Dotson develop. They can take over games as run blockers, and they showed that Sunday in Carolina.

Pass protection is another issue entirely, but these guys are people movers in the run game and can really set the tone in the trenches. Now, we need to see it on a consistent basis.