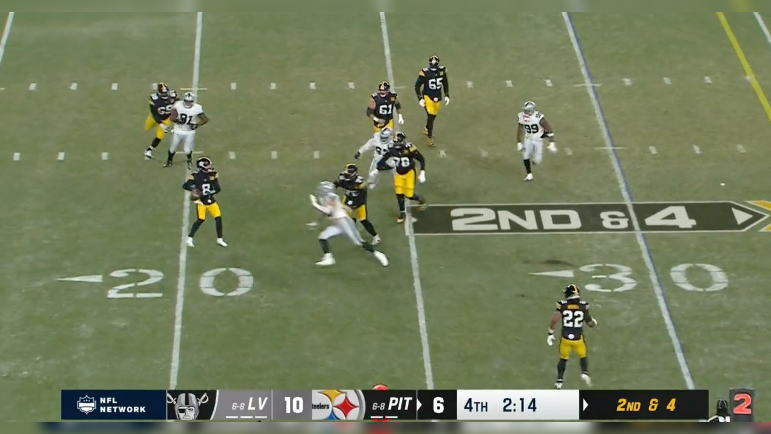 When it comes to game-winning drives in the NFL, whether it’s in the regular season, the playoffs or even in the big game, stories often come out about some great speech the quarterback or the offensive leader gave in the huddle prior to the start of the drive.

Most famously, there was the funny John Candy comments in the huddle from San Francisco 49ers quarterback Joe Montana in Super Bowl XXIII against the Cincinnati Bengals on Jan. 22, 1989. Montana spotted John Candy at the far end of the field and pointed him out to teammates.

A few minutes later, the 49ers were Super Bowl Champions.

For Pittsburgh Steelers rookie quarterback on Christmas Eve Saturday night at Acrisure Stadium against the Las Vegas Raiders though, there was no rah-rah speech or mood-lightening comments. Instead, he just focused on executing at the highest possible level he could, leading his team down the field for the game-winning touchdown.

“There’s no rah-rah speech that’s gonna put the ball in the end zone, man. It is very simple: everyone’s gotta lock in, do their job,” Pickett stated to reporters after an emotional 13-10 win over the Raiders, according to video via the Steelers YouTube page. “I’m gonna call the plays, we’re gonna get it relayed in. I told them, they’re gonna execute, I’ll execute and we’re gonna win the game. That’s pretty much it.

“When you’re in the locker room after and the guys are hugging after a win, that’s the best feeling in the world. So, I had no doubt that we’re gonna get it done.”

There might have been many doubts outside of the huddle on Saturday night as the Steelers offense took the field one final time trailing 10-6 on a frigid night at Acrisure Stadium.

With Pickett though, nothing fazed him.

In the end, it was very simple, at least from Pickett’s perspective. He relayed the plays to the huddle, went out and executed, and in turn his teammates executed as well as the Steelers marched right down the field in two minutes and nine seconds, finding the end zone for the first time all night, giving a fitting ending to a night in which the 50th anniversary of the Immaculate Reception was celebrated and the life and legacy of Franco Harris was honored with a halftime jersey retirement.