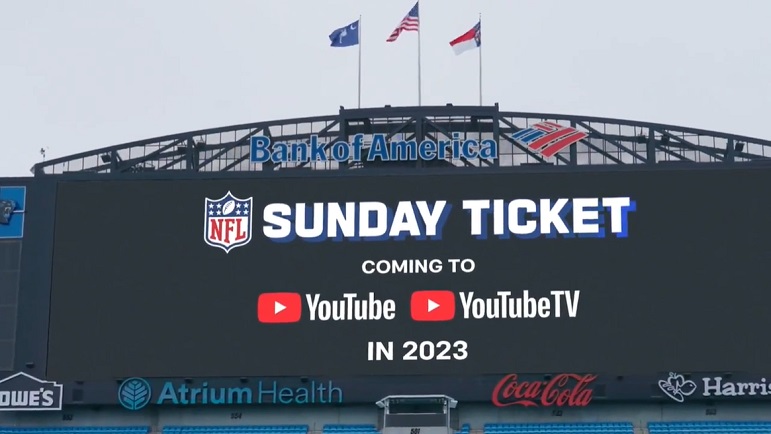 NFL Sunday Ticket finally has a new home. After decades under DirectTV, the league announced they’ve officially partnered with Google and YouTube TV effective for the 2023 season.

The NFL has announced that it reached a multi-year deal with Google giving YouTube TV and YouTube Primetime channels exclusive rights to NFL Sunday Ticket in the United States beginning next season.

The NFL released a press release Thursday morning to make the announcement. In part, they say:

“The National Football League today announced a multi-year agreement with Google granting YouTube TV and YouTube Primetime Channels the right to exclusively distribute NFL Sunday Ticket to consumers in the United States starting with the 2023 NFL season…Starting next season, NFL Sunday Ticket will be available on two of YouTube’s growing subscription businesses as an add-on package on YouTube TV and standalone a-la-carte on YouTube Primetime Channels.”

The league has not announced specifics of the length of the deal or the value of the agreement. But multiple reports indicate it is for a mind-boggling $2.5 billion per year, roughly $1 billion more than DirectTv was paying.

Under 7-year Sunday Ticket deal, YouTube will pay the NFL about $2.2 billion per season, source says. The NFL retains commercial rights to broadcast games in venues such as bars, restaurants. That bidding could push the total value of the package to about $2.5 billion annually.

Since 1994, NFL Sunday Ticket had partnered with DirectTV. But their subscriptions have declined over the years and the NFL is moving to a new-age model and effectively, like so many others, cutting the cord. Sunday Ticket will now be on YouTube making it more accessible to a wider audience to help justify that record price-tag. While there are some concerns for those who live in rural areas lacking high speed Internet, it’s more likely those who have it will sign up for it as opposed to getting DirectTv. Sunday Ticket allows fans to watch games even if out of market. For Steelers’ fans who litter the country, it’s an extremely valuable service.

Google/YouTube winning the contract is something of an upset. Back in the summer, Apple was reportedly the frontrunner for the service while Disney/ESPN and Amazon were also in the mix. It’s a major price tag for Google but it should bring in a huge audience and though some speculate Google will operate the service at a loss, it’ll help the company corner the market and take the program away from competitors.

The NFL has made a push to watch games online in recent years, partnering with Amazon for Thursday night games with the company hiring huge names like Al Michaels and Kirk Herbstreit. By most accounts, after working out some audio and video blips early in the year, the online-only service has gone well and has generally been well-received. Ratings haven’t been stellar but stabilized and average roughly 10 million per game.