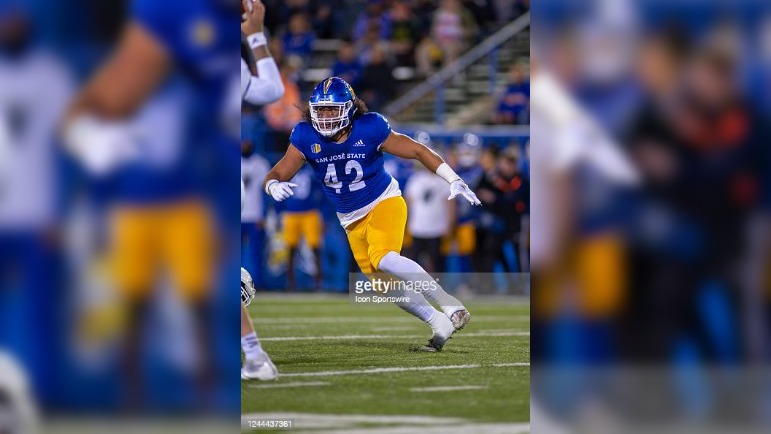 The Eastern Michigan Eagles travel to Boise, Idaho to take on the San Jose State Spartans on the blue turf Tuesday afternoon. The Eagles have a draftable OL in OG #62 Sidy Sow. The 6’5″, 326lb senior is a road grader upfront, having the size and strength to create wide running lanes against defenders in the MAC. Average in pass protection, Sow would best suit a run-heavy offensive system where he could come in as a late-round pick or UDFA and develop as a pass protector while building on his strengths as a run blocker to secure a roster spot and work his way into becoming a startable player.

Every time I tune into a #EasternMichigan game on the #MACtion slate, #EMU LG Sidy Sow is clearing lanes for his backs to run through. On the first play, gets movement on dbl team, and shoves the linebacker out of the hole.

For the Spartans, look out for WR #4 Elijah Cooks. The former Nevada transfer has represented himself well since coming to San Jose St., posting 63 receptions for 983 yards and a Mountain West Conference-high 10 receiving TDs this season. He’s got the size you look for in an outside receiver in the league (6’4″, 215lb), and he uses it well as a jump ball specialist who will likely be a seventh-round pick/UDFA.

Another name to watch for the Spartans is EDGE #42 Viliami Fehoko. The 6’4″, 263lb senior has the size and athletic profile you look for as well as the production, picking up nine sacks and two forced fumbles on the year, taking his career sack total to 23. He has good hand usage and plays with great effort as a pass rusher, making him an intriguing Day 3 target come April.

Big fan of #SJSU DL Viliami Fehoko’s game! Caught my eye in his breakout season in 2021 and now he’s up to a career high 9 sacks this year.

Scheme-versatile defensive linemen who has powerful hands and an unrelenting motor.

The Flames of Liberty will do battle against the Toledo Rockets Tuesday night in Florida as both teams attempt to secure their ninth win of the season. Liberty has several players out of this game due to entering the transfer portal but will have WR #3 Demario Douglas suit up for this one. Douglas hasn’t yet decided if he intends to enter the draft and has a small frame for NFL standards (5’8″, 170lb), but he has been a productive receiver the last two seasons for the Flames. Having 73 receptions for 977 yards and six TDs along with five rushes for 105 yards and a score, Douglas presents a shifty route runner that can create after the catch and be a return specialist.

The Flames also have a playmaker on the defensive side of the ball in EDGE #11 Durrell Johnson. The 6’3″, 240lb redshirt senior has had quite the season for the Flames, posting 49 total stops, eight sacks, a forced fumble, four PBUs, an INT, and holds the FBS lead for TFLs on the year with 22.5. Johnson transferred from ASA College to Liberty prior to the 2020 season and enjoyed a breakout campaign that season, leading the team with 11.5 TFLs and 8.5 sacks. Johnson could use more bulk to better set the edge against the run, but his length, effort in pursuit, and knack for getting into the backfield give him a chance to be selected somewhere on Day Three as a special teams contributor and developmental pass rusher.

For the Rockets, look out for LB #19 Dallas Gant. Gant transferred from Ohio State to get more playing time and got just that at Toledo, becoming the team’s defensive leader. Gant racked up 112 total tackles (50 solo) and two forced fumbles this season. Likely a UDFA, Gant could convince scouts to secure him with a late pick in the 2023 NFL Draft should he cap off his season with a strong performance and test well in the Spring.