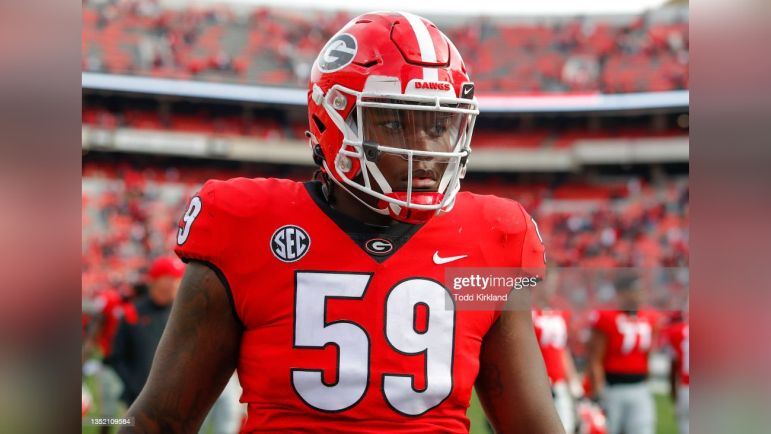 As both the college football and NFL regular season starts winding down, more and more mock drafts are created as analysts try and predict who NFL teams will try and draft to aid their squads. Yesterday, Joe Marino of The Draft Network released his two round mock draft for the 2022 draft and his mock has the Pittsburgh Steelers emphasizing defense with two of their first three picks.

With Pittsburgh’s first round selection, Marino has general manager Omar Khan and head coach Mike Tomlin looking to shore up the trenches with the Steelers drafting offensive tackle Broderick Jones with their fifth overall selection. Marino believes the Steelers go with the George offensive lineman first due to their recent investment in the offense.

“If the Steelers are going to maximize their opportunity to develop young skill players that were recently selected in the top two rounds in Kenny Pickett, Najee Harris, Pat Freiermuth, and George Pickens, finding more talent along the offensive line is a must” Marino wrote. “Broderick Jones has the makings of a top-tier NFL starter with his length, mobility, and power.”

Jones is rated as the highest offensive tackle by The Draft Network, and he is an athletic tackle. While he is not the biggest left tackle, standing at 6’4 315 pounds he is more than capable of getting the job done. Jones is a bit on the rawer size so he will need good coaching to be a high end starter at the NFL level, but as of right now Steelers offensive line coach Pat Meyer seems to be getting good work out of his unit so that shouldn’t be too much of an issue.

The Steelers have two picks in the second round thanks to the Chase Claypool trade, and Marino has Pittsburgh addressing the defensive side of the football with these draft choices. Despite having the highest paid defense in football, there are still glaring holes with the Steelers’ defense, particularly at cornerback. And that is the position Marino has the Steelers addressing with their second pick in the 2022 NFL draft.

With the Chicago Bears selection at 34th overall (33rd since the Miami Dolphins are forfeiting their first round selection) Marino has the Steelers selecting cornerback Devon Witherspoon out of Illinois.

“Devon Witherspoon is a physical, fluid, and competitive corner that has terrific ball skills that can elevate the Steelers’ pass defense.”

Witherspoon stands at 6’0 tall and weighs in at 180 pounds so he is not one of the tallest corners out there, yet he has still excelled in man coverage in his time playing for the Fighting Illini. PFF has graded him as one of the best cover corners in college, something the Steelers desperately need. The lack of shut down corners in Pittsburgh became very noticeable in the Cincinnati Bengals game when Tee Higgins torched the Steelers secondary for over 140 yards.

I agree with addressing cornerback here with the first pick in the second round. I don’t think any corner in this draft is worthy of a top ten pick, but it is certainly a top need. I have been a proponent of needing to address defense in this draft, and getting a good cover corner would be huge for setting up a dominant defense.

Finally, with their second selection of the second round, and last in this mock draft, Marino has the Steelers selecting inside linebacker Trenton Simpson out of Clemson. While certainly a controversial choice, Marino backs it up based on the decline of Devin Bush and Myles Jack.

“The decline of Myles Jack and Devin Bush has been really real. Trenton Simpson is a versatile linebacker that thrives in space and can give the Steelers a new defender on the second level to build around.”

Simpson has recorded 65 tackles this season with 2.5 sacks and two forced fumbles. At 6’3 240 lbs he can lay the lumber and help shut down the run game. He also has three pass defenses showing he is more than capable of defending in the pass game, something the Steelers have been sorely missing since Ryan Shazier’s career-ending injury.

This is the one draft pick I disagree with Marino on. I think Bush has improved and enough and pre-injury Myles Jack was playing well enough to where there is no need to use a top 50 pick on inside linebacker. Instead I would build up the defensive line. Heyward is getting up in age and may start slowing down soon and there is no guarantee Larry Ogunjobi comes back next year. I am not confident in the future of the defensive line right now and think a third or fourth round pick on inside linebacker makes more sense than a second.

Marino’s mock draft has the Steelers setting up their defense for the future while also slowly filling their line. A high draft pick at left tackle can go a long way to creating a great unit considering the play of the other lineman this season is being average to good. This draft would do a really good job setting Pittsburgh up for what could be another championship window in a few seasons, even if I do disagree with one of Marino’s draft choices.