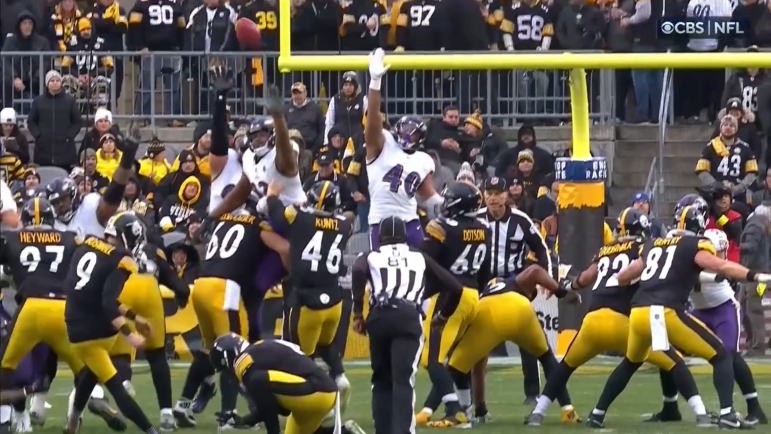 The Pittsburgh Steelers had an opportunity to record five consecutive victories against the Baltimore Ravens, this one potentially being critical in their hopes of securing a playoff berth for the season. Instead, they squandered scoring moments and have effectively eliminated themselves from contention, or at least come close to it.

“Particularly how these two teams come together and the nature of these matchups, points are precious”, head coach Mike Tomlin said after the game via the team’s YouTube. “We turn the ball over when we were in scoring territory a couple of times, taking points off the board”.

Starting quarterback Kenny Pickett was concussed on the opening drive of the game and exited after the second drive, Mitch Trubisky riding the rest of the way. Although he ultimately found the end zone twice, he also threw three interceptions, including two inside or near the red zone—two opportunities to score at least three points, in a game that they lost by two.

That still would have been fine had they managed to make the one field goal they did attempt. But instead they allowed Calais Campbell to get up and block it—something he’s done frequently in his career, something like eight or nine by now.

“We allowed a known legendary guy to block a kick who’s probably the leading active kick blocker in the NFL. He skinnied in the gap and blocked the kick”, Tomlin lamented. “And obviously we couldn’t get the needed stop at the weightiest moment on defense”.

That’s nine points the Steelers conceivably should have had if they had simply executed the basics of the game—don’t turn the ball over and get your kicks off—which would have been more than enough for the margin of victory on this particular afternoon.

Especially with the Steelers down to their third-string quarterback in Anthony Brown, and undrafted rookie making his NFL debut. Lamar Jackson didn’t even start the game, but Tyler Huntley was injured in the second half taking a short from Minkah Fitzpatrick and forced out of the game and into the concussion protocol.

The Steelers theoretically should have been much better equipped to handle the game with a backup under center, Trubisky being a veteran former first-round pick with ample experience. But while he moved the ball down the field, he made the costly plays that lose the game, throwing three interceptions in all.

Pittsburgh had been on a four-game streak without turning the ball over at all, and it had been by far their most successful run of the season, going 3-1 since the bye. Had they only capitalized on one of their missed opportunities for points, we could be having a different conversation.