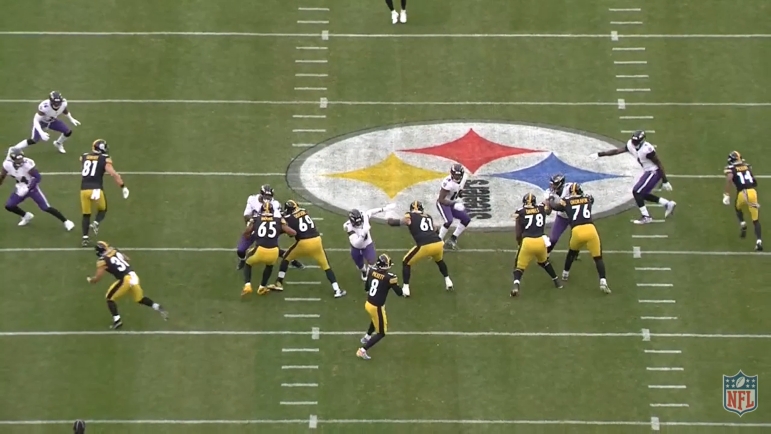 The Pittsburgh Steelers’ fifth play from scrimmage in Sunday’s game left their rookie quarterback Kenny Pickett concussed, even if it took several more minutes for him to be diagnosed. He was brought down hard on a sack by Baltimore Ravens linebacker Roquan Smith on a third down, evaluated, and then returned for a three-and-out possession before being ruled out for the remainder of the game.

While the hit itself should have been penalized for a facemask, which Smith was able to use in a way that contributed to Pickett’s head hitting the ground and resulting in a concussion, the blame for it happening in the first place goes to the protection, as center Mason Cole told Brian Batko yesterday for the Pittsburgh Post-Gazette.

While he was not directly quoted, Batko says that Cole attributed Smith’s pressure to a miscommunication, and watching the replay from the end zone view, it’s readily apparent. With the Ravens showing blitz, they did not slide protection.

Steelers center Mason Cole said he talked to Kenny Pickett this morning at the facility. "He's all right. Tough deal. I can't answer any of the medical questions, but he was in good spirits."

Also called it a miscommunication by the OL that got Pickett sacked by Roquan Smith.

Baltimore had both linebackers, Smith and Patrick Queen, lined up in the A gap, the former on the offensive right side. Cole went with Smith, who dropped into coverage, while left guard Kevin Dotson worked on the defensive end, resulting in Queen having a free rush.

Queen wasn’t able to finish the play, Pickett spinning out of his grasp and running off to his right, but that’s when Smith broke from his coverage and rushed the quarterback. Now out of the pocket, he lost quarterback protections and was brought down hard—on his head, resulting in a concussion.

Now I’m not going to pretend to understand exactly how the Steelers were supposed to play this, even if I have my suppositions, but this just goes to show how critical it is for clear communication. As they say, even 11 players running the same wrong play is better than 10 players running the right play and one not.

The failure to properly communicate whose responsibility Queen was resulted in the play getting blown up without much chance of success. Even though he managed to escape the initial pressure, there wasn’t enough time for him to recover and attempt to make a play by the time Smith broke off his coverage.

None of that ultimately justifies the manner in which Pickett was brought down, certainly more forcefully than was necessary, but that’s neither here nor there at this point, and that’s no consolation to the line. The bottom line is that a miscommunication occurred that resulted in the play being busted, and any number of bad things can result from that.