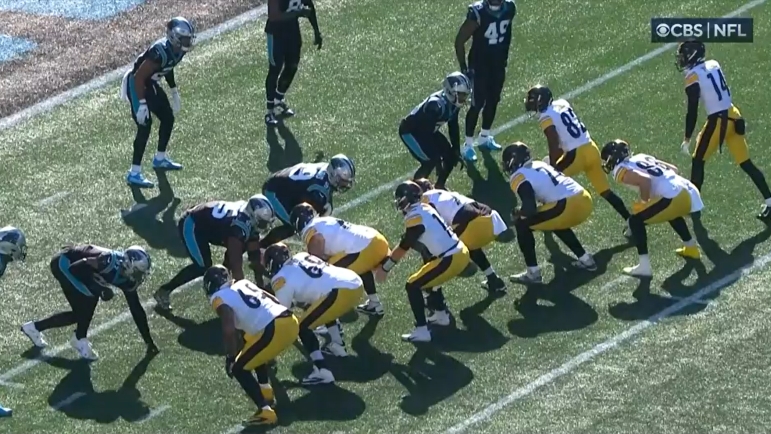 Coming into this game, the Pittsburgh Steelers had more than a few struggles in the third quarter. This was not the case against the Carolina Panthers, as the team opened the second half with a 21-play 91-yard drive that took nearly twelve minutes off the clock. This drive gave the defense a long rest, which showed in their dominant second half. Linebacker Alex Highsmith, who had himself a day with a sack and four tackles, delved into what the drive meant to the defense in the post-game interview on the team’s YouTube channel.

“That drive was amazing,” Highsmith said when asked about the team’s long drive. “I think it was 21 plays. That’s the longest drive I’ve ever seen, like I witnessed from my own two eyes. I don’t think I’ve ever seen him drive that long. And so we were just on the side on like tick, tick, tick, tick, like the clock, tick ticking. Shout out to the offense for that amazing drive and starting the second half in that way, because that gave us a lot of momentum.”

This was a historically long drive for the Steelers. It was the first 21-play drive since 2019, and only the seventh since 2001. The drive started with a kickoff penalty, which forced the offense to begin inside their own ten yard line. The drive consisted of twelve runs and nine passes, and was about as methodical as a drive can be. Most importantly, it gave the defense enough rest to come back in full force, which is something the offense had not efficiently done this season.

The Steelers’ defense getting 12 minutes of rest to open the second half proved helpful. Indeed, they stuffed the Panthers’ run game, and sacked quarterback Sam Darnold four times. Outside of a drive that was extended by a Marcus Allen Penalty and a garbage time field goal drive, the defense played about as well as they could have in the second half.

The Steelers’ best wins this season have seen them run the ball effectively and stick by the run-first recipe. They ran the ball 45 times against the Panthers, winning the time of possession battle by nearly 13 minutes. Equally significant, they were 12-16 on third down, and got 13 first downs with the run game.

As a general rule in football, long drives that shorten games tend to yield a good outcome. As a team that is attempting to establish a run-first defensive identity, the performance was commendable, and will keep their unlikely playoff hopes alive.