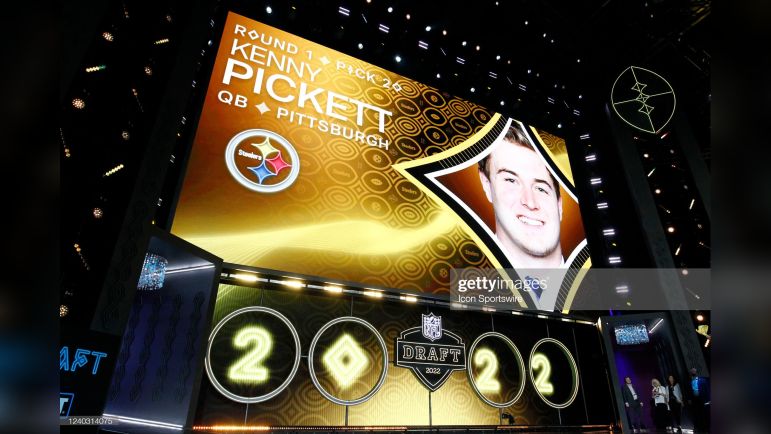 The Pittsburgh Steelers have continued to struggle this season on both sides of the football following their most recent loss at home to the Baltimore Ravens. The defense got gashed for 215 yards on the ground while the offense turned the ball over three times while in Baltimore territory, bringing several promising drives to a screeching halt.

The needs on this team have been mentioned at nauseam since the beginning of training camp and have become more apparent in recent weeks as this team has stumbled to a 5-8 record with four more games left to play in 2022.

ESPN recently published an article highlighting the 2023 NFL draft needs for every team in the league and had a similar sentiment that most Steelers fans have been clamoring for this season regarding beefing up trench play on both sides of the football and finding a true #1 CB.

“The Steelers are projected have their highest pick since 2014 when they had the No. 15 selection after a rebuilding season,” said ESPN’s Brooke Pryor regarding the Steelers. “They have several immediate positions of need they could fill after addressing the quarterback position in 2022. At the top of their wish list should be cornerback, offensive tackle, interior offensive line, and defensive tackle. Since Pittsburgh parted ways with Joe Haden after last season, a true lockdown cornerback hasn’t emerged. And on the offensive line, 2021 fourth-round selection Dan Moore Jr. has been one of the most-penalized tackles and has allowed six sacks.”

It’s no secret that the Steelers need to desperately improve their play on the defensive line as the team has ceded 120+ rushing yards six separate times this season despite adding the likes of DL Larry Ogunjobi in free agency and drafting DL DeMarvin Leal in the third-round last year. With Ogunjobi, Chris Wormley, and Tyson Alualu all scheduled to hit free agency this offseason, it’s plausible that the Steelers may need to find two starters along the defensive line if they deem Leal, Isaiahh Loudermilk, and Montravius Adams unfit to start next season.

No one getting off blocks but Cam Heyward is the one who loses his run gap he (which he admitted post-game). But why are the Steelers playing him at NT? Not good for him, not good for this defense. No Adams/Alualu on the field this play. Dobbins goes for 44. #Steelers pic.twitter.com/Q6g5TqpDQE

The offensive line has also been near the top of the wish list of fans and analysts alike for Pittsburgh. While the unit has improved since the bye, the team still can improve the left side of the OL with LG Kevin Dotson battling inconsistency issues and LT Dan Moore Jr. lacking the upside to become a franchise LT in the league.

Watch: Kevin Dotson Is The Most Frustrating Steeler

Many will argue that LT is the more pressing need but given the team’s faith in Moore ever since making his first start as a rookie last season and the value they put on the interior OL compared to OTs in the past, it’s likely that they may look to address LG and give Moore one more year as the team’s LT to see how he develops.

Perhaps the position of need for the Steelers that has picked up the most steam through the course of the 2022 season is cornerback. Pittsburgh looked to have solid depth to start the year in the secondary with the likes of Ahkello Witherspoon, Levi Wallace, Cam Sutton, James Pierre, and Arthur Maulet in the fold, but Witherspoon has had a terrible season thus far and the combination of Wallace and Sutton are better suited to be CB2s rather than a CB1 that can match up with alpha WRs on a weekly basis.

AGHOLOR OVER THE TOP!

Given the current state of the team and the holes that will open when scheduled free agents hit the open market, there are plenty of avenues Pittsburgh could go in terms of addressing this roster. Look for the team to bring back several of their own players (i.e. Sutton, Edmunds, etc) and sign a couple of outside free agents to address specific needs before turning to the draft and allocating their resources to adding talent and youth to positions of need. We may be several months out from the 2023 NFL Draft actually taking place, but the offseason is fast approaching, thus putting the whole pre-draft cycle into effect.