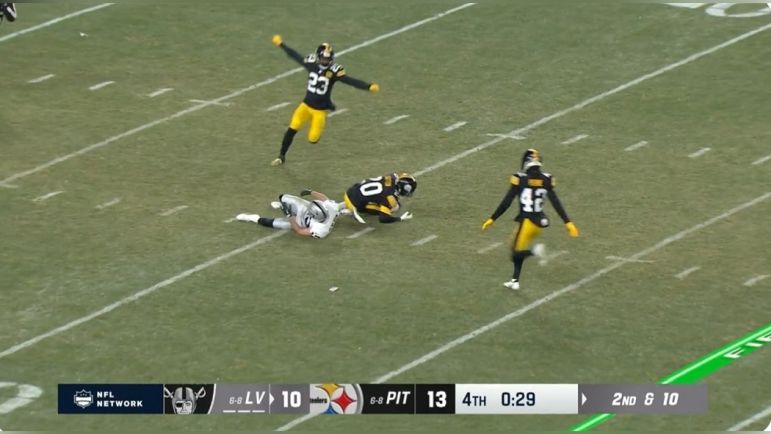 After allowing an opening drive touchdown, the Pittsburgh Steelers defense played a near-perfect game in the team’s 13-10 win on Christmas Eve over the Las Vegas Raiders. The defense had three interceptions, the last of which came when cornerback Cameron Sutton picked off Derek Carr when he was going deep for Hunter Renfrow on Oakland’s final drive. Sutton talked about the final interception in the locker room after the game.

Cam Sutton with the final pick of Carr #Steelers pic.twitter.com/I9qqUFtBbb

“Full 60-minute battle of the game. Obviously, it was a tight game, game of inches type of thing. Just week in, week out, just trying to make the most of every opportunity and just being able to do that is pretty special,” Sutton said via TribLive’s Chris Adamski on Twitter.

The guy who made the clinching play pic.twitter.com/4dEDwIHpVw

The Steelers’ defense played one of their best games of the season in what truly was a game of inches. The Steelers wouldn’t have the opportunity for their game-winning touchdown if they didn’t get a few extra inches on Kenny Pickett’s quarterback sneak on 4th and 1 the play before, but that’s football sometimes. But the defensive effort was special. The Steelers were able to turn the Raiders over three times, with Minkah Fitzpatrick, Arthur Maulet and Sutton registering interceptions, with Sutton’s arguably being the biggest with the Raiders having the opportunity to win or tie on what would’ve likely been the final drive of the game.

Throughout the game, the defense stepped up. Cameron Heyward played one of the best games of his career, the Steelers bottled up NFL rushing leader Josh Jacobs, holding him to 44 yards on 15 carries, and sacked Carr three times in addition to the three picks. The Pittsburgh offense struggled for the majority of the game, and yet, they had the chance to win the game with under a minute left thanks to the play of the defense. Across the board, guys stepped up and made plays and they never really let the Raiders get going.

After the opening drive, where Las Vegas d tallied seven first downs and methodically took 8:22 off the clock on a 14-play, 72 yard drive, the defense buckled down. All the Raiders would get on the scoreboard the rest of the game was a 40-yard field goal by Daniel Carlson at the end of the first half, and they only had six first downs after their opening series.

In a game where the defense needed to step up, they did in a huge way. And now, somehow, the Steelers are through 15 games with a chance to make the playoffs. It’s a slim one. But it’s a chance. Somewhere, Lloyd Christmas is smiling.