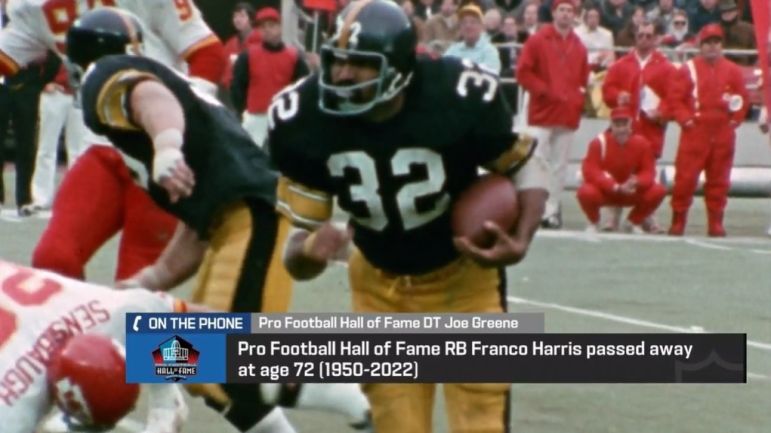 More reactions from Pittsburgh Steelers past and present to the death of Franco Harris early Wednesday morning. Joe Greene, arguably the biggest name in franchise history, joined NFL Network’s Total Access to discuss hearing the news of Harris’ death. Like the rest of Steelers’ Nation, Greene can hardly believe the news.

“It’s incredible,” Greene said. “This is like a bad dream and I’d like to wake up and find it all untrue that I’ve been experiencing the last 10 to 15 hours.”

Greene was the first building block in building the franchise’s 70s dynasty but Harris was just an important of a piece as the Steelers ran their way to their first two Super Bowls in 1974 and 1975. Harris came just three years after Greene arrived, bridging that gap between Noll turning over the roster and actually generating winning results. 1972 was the year the team broke through. Though they didn’t win the Super Bowl, losing to the undefeated Miami Dolphins, Harris’ Immaculate Reception was the play and moment that changed the perception of the franchise that’s carried the team through the present day.

While Harris was an amazing player, Greene called him an amazing teammate and friend who truly cared about his teammates and the city he played in. Like so many, Greene spoke glowingly of Harris’ upbeat attitude that resonated throughout the locker room during good times and bad.

“Couldn’t get any better, [couldn’t] have a better teammate. Franco came to work early and he left late and he was always positive. Never said a negative thing about anyone or anything.”

Greene said he last spoke to Harris roughly two months ago as the team began to unveil its Hall of Honor Museum inside Acrisure Stadium. The two likely would’ve reunited this weekend as the Steelers retire Harris’ #32 jersey, an event that appears to continue even in the wake of his death.

Thanks to Greene, Harris, and so many others, the Steelers began the decade as an afterthought but ended it as a dynasty winning four Super Bowls across six years, 1974 and 1975, 1978 and 1979. It was Harris as the bedrock of the offense, Greene as the bedrock of the defense, and both ended their careers in Canton, Ohio.

Understandably, Greene’s words came across as emotional as he fought back tears. The difficult reality is the 1970s dynasty team has lost several of the faces that it made up. L.C. Greenwood and Dwight White, Greene’s teammates along the defensive line, have passed on. Today, that group lost Harris, one of its leaders and its faces. But beyond that, they lost a friend and one heck of a man.