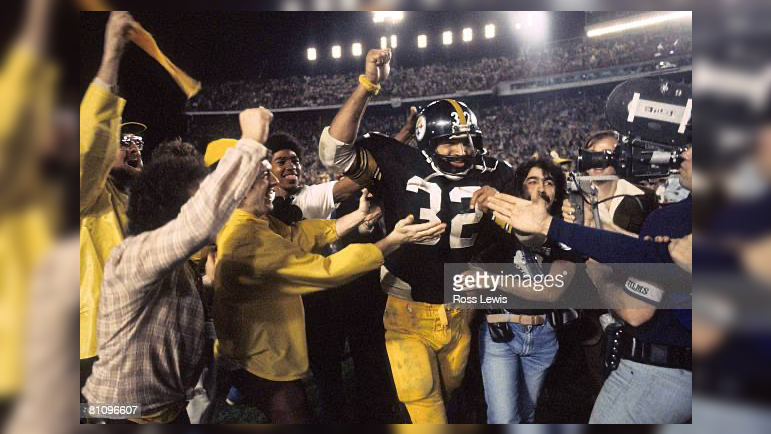 Hard to believe a 14-year NFL career that resulted in four Super Bowls, nine Pro Bowls and a spot forever in the Pro Football Hall of Fame could be overshadowed — in a sense — by arguably the greatest play in NFL history, that being the Immaculate Reception.

Of course, that play occurred on Dec. 23, 1972 against the then-Oakland Raiders, giving the Steelers their first-ever playoff win in franchise history, setting off a dynasty in the 70s that won four Super Bowls, and gave berth to the heated Steelers-Raiders rivalry for years to come.

For many, that play signified and summed up Harris’ Hall of Fame career. For former teammate and fellow Pro Football Hall of Famer Jack Ham, Harris was so much more than the Immaculate Reception.

Appearing on ESPN 970 with Stan Savran Wednesday, Ham spoke glowingly of his former teammate and friend, citing the Hall of Famer’s durability as a reason why he was such a special player overall and shouldn’t be overshadowed by one single play.

“His durability was…you could always count on him,” Ham said, according to audio via iHeart.com. “We win our first Super Bowl because, again, we could run the football against a very good Vikings defense. I think Franco had a 150 yards and was the MVP of that game. To have that type of back that could get int the secondary…at 220 pounds he’s not as big as some of the backs in today’s game, but he was big enough.

“He just brought an element, and durability. The Immaculate Reception, you’re right, will always be that one thing that will always be linked to Franco and his legacy, but his career and his durability he had, and the way we had a constant in the running game that was so important to us, it does take away some of what he was able to bring to the table.”

Right or wrong, the Immaculate Reception will always be the first thing that comes to mind when people think of Harris and his overall legacy. It’s rather remarkable though that the famous play occurred near the end of his rookie season and he then put together 12 more remarkable seasons with the Steelers, rushing for 11,950 yards as a member of the Steelers with 91 touchdowns, all while winning four Super Bowls and heading to nine Pro Bowls.

As Ham pointed out, Harris was remarkably durable, rarely missing games for the Steelers overall until later in his career. As such a big part of the Steelers’ rushing attack, it was pivotal that he was healthy and on the field, giving the Steelers that game-changing element offensively to go with Hall of Fame receivers in John Stallworth and Lynn Swann, and Hall of Fame quarterback Terry Bradshaw at the skill positions, not to mention an elite offensive line with names like Hall of Famer Mike Webster, Jon Kolb, Sam Davis, Gerry Mullins, Ray Mansfield, and Larry Brown in the 70s.