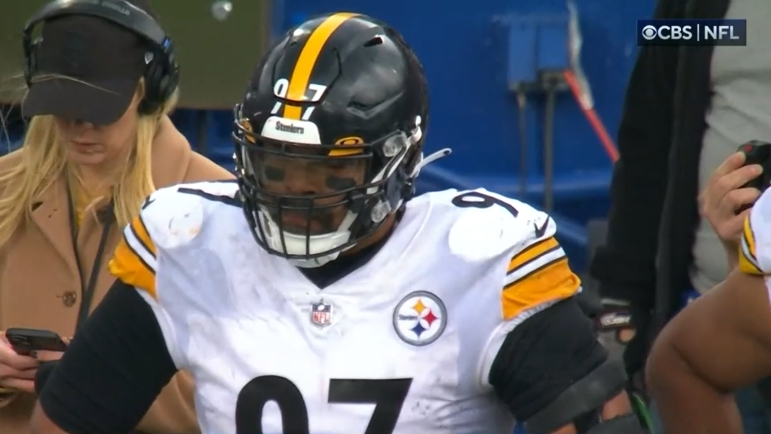 On Thursday prior to practice, DL Cam Heyward spoke to the media about the team’s upcoming game against the Atlanta Falcons and gave some of his thoughts on the team’s previous game against the Indianapolis Colts. Heyward was also messed with for having to wear a Michigan sweatshirt after losing a bet with teammate Chris Wormley regarding the outcome of the Michigan/Ohio State game this past weekend.

When asked if he still thinks if Pittsburgh has a shot at still making the playoffs despite their current 4-7 record, Heyward put it bluntly that it isn’t over until the fat lady sings.

“I don’t think we’re ever dead,” Heyward said regarding the offense Monday night to the media on video from the team’s website. “We just got to go play. We got to make sure that we hold up our end of the deal and start stacking them. It’s not going to be easy. They have a pretty good team. they have a good pass rush on their side. They got really opportunistic special teams between their punt returner and kickoff returner. And then on offense, they got a gauntlet of runners and we got to make sure we handle them.”

Currently, the Steelers have only a 2% chance of making the playoffs according to FiveThirtyEight. With seven games left on the schedule and Pittsburgh needing to basically win out or incur only one more loss to be in the mix for a Wildcard spot, the odds of a team making it into the postseason appear pretty bleak.

A rough few minutes on national TV for Jeff Saturday’s on-the-job attempt to learn how to be an NFL coach.

Still, Pittsburgh has shown multiple times that it can start slow but finish strong at the end of the year. They somehow snuck into the playoffs last season after starting 1-3 and having a poor offense that could generate big play consistently down the field. In 2019, Pittsburgh started the season 1-4 after losing Ben Roethlisberger to a season-ending elbow injury, by managed to battle back into the playoff hunt and just missed out of a Wildcard spot, finishing 8-8.

If you want a scenario that closely resembles the 2022 season, go back to 2013 when the Steelers started the season 0-4 and reached the halfway point of the season at 2-6. They were projected to have a top five draft pick, but battled the second half of the season, going 6-2 the rest of the way and finished with an 8-8 record.

Obviously, .500 is not where we want to see this football team that has yearly championship aspirations. However, Heyward, HC Mike Tomlin, and the rest of the Steelers organization aren’t in the business of throwing games for better draft position. Tomlin has coached this team to show resiliency amid adversity and finish better than what their starting record would suggest.

It’s nearly impossible for the Steelers to make the playoffs this season, let alone finish 2022 with a record .500 or better given the poor start this team had at the beginning of the season. However, like Heyward mentioned, they aren’t dead just yet, and plan to fight their way back into relevancy even if the task seems insurmountable.