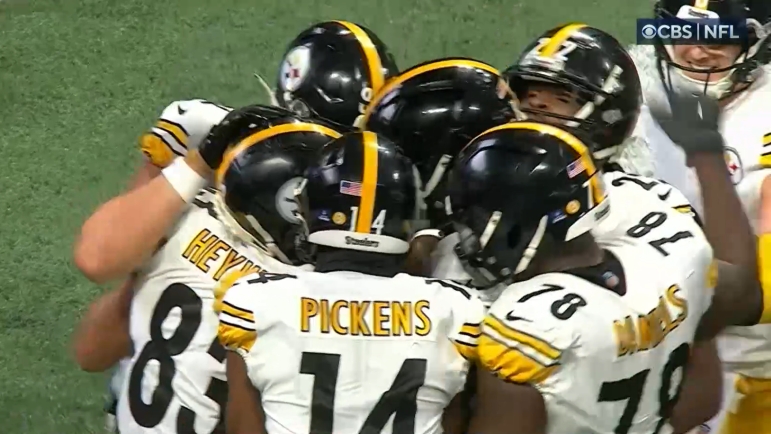 Even though they’ve been managing to win games over the past month, it hasn’t always been pretty. The second halves especially have been at issue for both sides of the ball, and that certainly applies to today’s win over the Atlanta Falcons.

The story of the first half was the Pittsburgh Steelers offense driving the field but not finding the end zone as often as they should. They didn’t move the ball as well in the second half, but the defense allowed the Atlanta Falcons to.

Defensive lineman Cameron Heyward is appreciative of the long drives his unit did get to sit out, however, especially in the second half while the Falcons running game was gassing them, perhaps even wondering how things might otherwise have gone differently.

“Thank God they did”, he said in his post-game press conference when he was asked about how big it was for the offense to break off some long drives during the game, via the team’s YouTube channel. The Steelers dominated time of possession in the first half, but only had about a six-minute advantage by the end.

Now, truth be told, the only Falcons drive on which they didn’t pick up at least one first down was the final one that ended with a Minkah Fitzpatrick interception on the first play. They even had a one-minute drive late in the first half that managed two first downs.

A pair of long scoring drives in the second half really tested the defense, however, particularly a 16-play, 78-yard effort that was ultimately stymied by self-inflicted penalties and resulted in them only netting a field goal when they could have taken the lead with a touchdown and extra point.

That proved to be the final points in a 19-16 Steelers win. They got the ball back after that drive with 5:27 to play and managed three first downs, but did have to punt from the Atlanta 40 with 35 seconds to play.

An excellent punt by Pressley Harvin III—benefitting from the officials missing Miles Boykin going into the end zone before downing the punt at the two—set up poor field positioning for Marcus Mariota and contributed to his throwing errant to Fitzpatrick to seal the game.

But that defense could have been a lot more gassed if it weren’t for five drives by the offense that ate up more than three minutes’ worth of clock, including multiple drives of seven-plus minutes. Three drives spanned 12 or more plays—yet all of them ended with a field goal. Something that has to change moving forward.