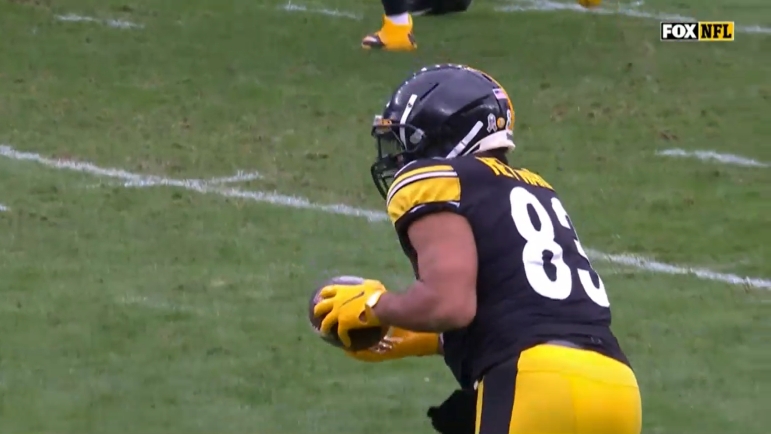 Bringing back a series we did over the summer to finish out the year. I promise we’re not going all Embrace Debate on you but Jonathan Heitritter and I have teamed up to debate issues we have genuine, good-faith disagreement over Steelers-related topics. Let us know who made the better argument and what side of the debate you come in on in the comments below.

TE Connor Heyward has been used more in a gadget role so far this season, catching nine passes on 13 targets for 106 yards and a TD along with one rush on a jet sweep last week for 21 yards. Heyward was recognized as a Swiss Army Knife-type player that wouldn’t have a true position or role in the offense. However, while Heyward only has 10 touches as a rookie in 2022, he currently has Pittsburgh’s third-longest reception of the year of 45 yards and the sixth-longest rush of the season on that jet sweep against the Raiders.

This could be seen as an indictment of the offense in general, but I see it as a reason to expand Heyward’s role on offense and give him more opportunities, particularly in the passing game. Nothing against TE Zach Gentry, but Heyward is a better overall receiver at TE than the upcoming free agent, having sure hands, a better ability to create after the catch, and can run routes more effectively than the jumbo TE. This doesn’t mean that Heyward should push Pat Freiermuth for targets in the passing game, but rather that he should get the opportunity to be on the field more on passing downs to see if he can earn more targets.

When watching Heyward play TE at Michigan State, I saw a player that resembled former NFL TE Delanie Walker from the standpoint of being an undersized, yet capable pass catcher at TE. Walker was fairly quiet his first few seasons in the league with the 49ers, but saw is production increase with more of an elevated role through the years in San Francisco and took off when he joined the Titans. I don’t think that Heyward will ever reach that level, but I do think that he can be a capable pass catcher that could help the offense with another reliable intermediate target that can create after the catch as a former running back.

Heyward’s enjoyed a solid rookie season. And the team’s gotten better and smarter with how they use him. But he’s still a third-string tight end entrenched behind two established guys in Pat Freiermuth and Zach Gentry. He’s still 5’11, 237, and a tweener – we knew that the second Pittsburgh drafted him. He’s a football nomad, a guy without a home. That isn’t a bad thing, there’s value in versatility, but it makes it hard to see consistent playing time.

Besides, Heyward’s role in this offense has grown. Over the first four weeks of the season, he logged 12 total snaps. Since the bye, he’s had double-digit offensive snaps in five of the team’s seven games. Over that span, he’s caught his first touchdown, recorded his first carry, in a big spot against the Raiders to seal that game, and has been far more involved in the offense. Increased playing time isn’t always immediate or all at once. It’s a snowball that rolls downhill, gathering more steam, and that’s what Heyward’s arc has looked like.

No, he’s not playing a lot of snaps but what’s the expectation? 20, 30, 50 a game? He’s a #3 tight end in an offense that mixes and matches personnel. Few guys in this offense see consistent numbers. Even starters with regular playing time are up and down in terms of stats. Diontae Johnson, George Pickens, Pat Freiermuth, all those guys have had big games and duds. So finding consistent work for Heyward isn’t the goal and shouldn’t be the hope. He ebbs and flows like the rest of them.

The Steelers have had a run-first approach since the bye and generally, a hybrid guy like Heyward isn’t ideal to use. You want your biggest people and best run-blockers in there. Heyward is cutting more on split zones, a wise choice by Pittsburgh, but he’s not the guy you want on the field when the Steelers bring in their heavy personnel to win the war of attrition.

Heyward’s having a fine season. I like his game. But his role and usage in this offense is, like that bowl of porridge in the Goldilocks, just right.