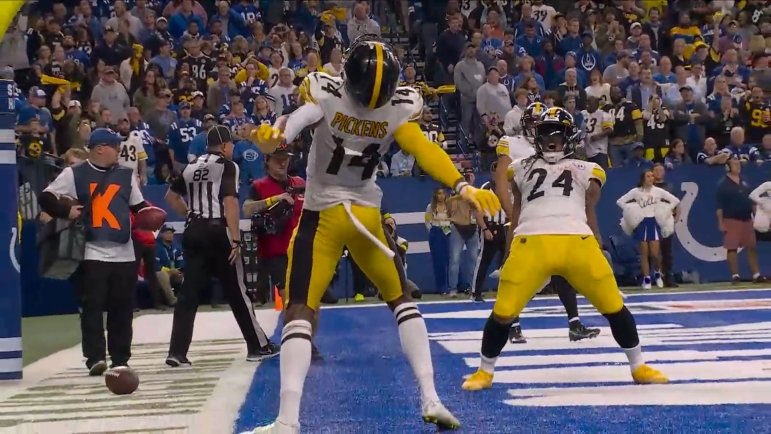 There hasn’t a lot going right for the Pittsburgh Steelers in the 2022 season.

The team currently sits at 4-7, and while getting back into the win column last week against the Colts, their chances of making it back into the playoff hunt are slim-to-none. The loss of T.J. Watt for a large portion of the season handicapped the defense who struggled to get pressure on the QB, allowing numerous big plays to opposing offenses. The offense wasn’t much better at it continually stalled in the second half and has yet to put together a passing attack that opposing defenses should fear.

Still, with all the issues that the Pittsburgh Steelers have dealt with this season, there is one positive we all can be certain about: the Steelers got an absolute steal in WR George Pickens.

While Pickens’ stats aren’t necessarily eye-popping through his first 11 games of his NFL career (36 receptions for 510 yards and two TDs), his impact on the football field cannot be ignored. Pickens burst onto the scene early in the season, making possibly the catch of the year against the Cleveland Browns on Thursday Night Football and has since seemingly made a highlight reel catch every week. He routinely has won in contested catch situations and has seen his route tree expand in recent weeks, become a more well-rounded receiver.

His ascension made former Steelers WR Chase Claypool expendable, allowing Pittsburgh to capitalize on their new investment at WR and trade Claypool to the Chicago Bears for their second-round pick which looks like highway robbery as the selection should be near the top of the second round. While Pickens has dealt with his growing pains in terms of nuanced route running and drops, he has earned the trust of fellow rookie QB Kenny Pickett and for all intents and purposes has past Diontae Johnson as Pittsburgh’s WR1 this season when it comes to on-field production.

The Steelers drafted Pickens 52nd overall in the second round of the 2022 NFL Draft. He was the 11th WR taken with six receivers going in the first round and another four receivers going in the second before Pickens was selected. If we were to hold a redraft of the 2022 draft class, it’s almost certain that Pickens would be a first-round pick as the rookie out of Georgia has proven that the knee injury suffered back in the spring of 2021 is well behind him. However, would Pickens be the overall WR1 in the 2022 NFL Draft if we redrafted today?

Preseason stats for WRs drafted in 2022. Most top draftees acquitted themselves quite well. #Steelers George Pickens might prove that 10 wideouts shouldn't have been drafted ahead of him. Yardage leaders: #Dolphins Erik Ezukanma, #Bills Khalil Shakir, #Packers Samori Toure. pic.twitter.com/ssCf5k1Irt

For starters, there’s no way that Pickens would be the 11th WR taken in a redraft scenario. Players like John Metchie, Tyquan Thornton, and Wan’Dale Robinson would be hard-pressed to have an argument to be drafted above Pickens based on what we know today along with former first round receivers like Treylon Burks and Jahan Dotson.

Drake London was the first receiver drafted in 2022 by the Falcons out of USC, and he too has struggled due to poor QB play/lack of a passing offense in Atlanta this season. However, based on what we’ve seen thus far from London and Pickens this season, it wouldn’t be hard to see Pickens as more-deserving of a higher draft slot than London with both receivers bringing that big-bodied combative catch skill set to the table.

Jameson Williams out of Alabama is an interesting argument as the current Lions wideout was seen as the top receiver by many coming out but suffered a torn ACL late in the season and has essentially taken a redshirt year in 2022. Despite this, Detroit still traded up to 12th overall to draft Williams who figures to return to the field soon.

The other receivers drafted ahead of Pickens that present the best argument for WR1 in the draft class are Chris Olave of the Saints, Garrett Wilson of the Jets, and Christian Watson of the Packers. Olave and Wilson came into the league pro-ready out of Ohio State with Wilson Coming on strong the last month and Olave starting the season hot. Both receivers have had to overcome unsteady QB play like Pickens and boast better stats than Pickens at this point of the season. Watson dealt with injuries in training camp and the preseason, causing him to get eased in slower to start the season. However, he has exploded the last three weeks, catching six TDs while posting over 250 yards.

Garrett Wilson is HIM 🔥 (via @NFL) pic.twitter.com/1eYfCpAtOr

There is no denying that George Pickens is one of the better young WRs in the NFL based on talent alone, having the potential to be recognized as a top ten WR in the league within the next couple of years. However, the debate remains regarding if Pickens would be WR1 in the draft class if the league redrafted today or if he would slot in somewhere in the top five. Regardless, the Steelers appear to have done it again, drafting a WR out of the first round who looks primed to become a focal point of the passing game for years to come.

What are your thoughts on George Pickens this season? Would he be a first-round lock if the NFL redrafted the 2022 Draft today? Does Pickens have an argument for being WR1 in the draft class, or would he better in the top five? Please leave your thoughts in the comments section below and thanks again for reading!