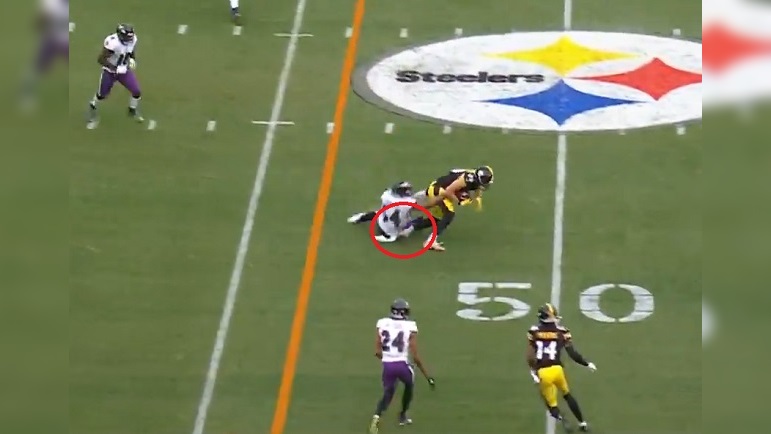 Pittsburgh Steelers tight end Pat Freiermuth will be on the team’s Week 15 Wednesday injury report after not practicing on Wednesday. Even so, the Steelers second year tight end out of Penn State should be ready to play on Sunday against the Carolina Panthers.

Freiermuth, who is dealing with a foot injury this week, said on Wednesday that he hurt his foot in the first quarter of Sunday’s home loss against the Baltimore Ravens and following his first catch of the game, according to Brooke Pryor of ESPN. He indicated that his foot was sort of rolled up on when he was tackled on the play. He indicated that he did not practice on Wednesday but expects to play on Sunday against the Panthers.

As you can see in the image used for this post, it appears as though maybe Freiermuth is dealing with a left foot injury following his first catch in Sunday’s game with 1:40 left in the first quarter. According to our charting from that game, Freiermuth missed the next two offensive plays after making that catch. He went on to log just 31 offensive snaps on Sunday out of a possible 55.

On Tuesday, Steelers head coach Mike Tomlin indicated that Freiermuth’s snap totals on Sunday were likely limited due to the foot injury that he had suffered in-game.

“[Pat]Freiermuth I think is just managing the foot injury that caused him to miss a piece of time in the game,” Tomlin said of the team’s starting tight end on Tuesday. “He returned in the game and was able to finish and I would imagine that his level of participation is going to increase as we push through the week.”