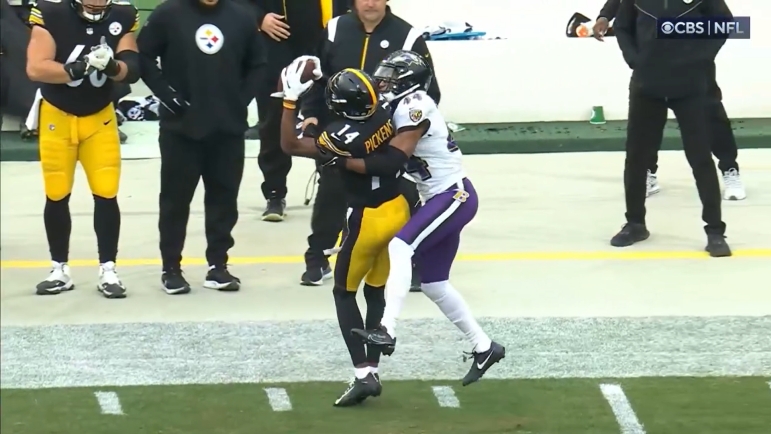 The Pittsburgh Steelers lost a close one to the Baltimore Ravens on Sunday in Pittsburgh, falling by a score of 16-14 to drop the Steelers to 5-8 on the season. This game was one full of superlatives, one being QB Mitch Trubisky coming in after Kenny Pickett got knocked out of the game due to a concussion and proceeding to throw three INTs. Another would be the defense surrendering 215 rushing yards to the Ravens offense who were on their third-string UDFA rookie QB who threw for 16 yards but couldn’t stop what they knew was coming right at them.

However, one underrated storyline that continues to bother me a few days removed from the game pertains to the usage of rookie WR George Pickens throughout this game, specifically in the second half. Pickens was coming off a controversial week for him, being held under the microscope after blowing up on the sideline the previous week in Atlanta after being completely fazed out of the offense. Against the Ravens on Sunday, Pickens was able to get involved, catching all three of his targets for 78 yards (26.0 YPR) in the contest.

While three receptions for 78 yards is a solid day at the office, the issue that frustrates me is how Pittsburgh’s offense will not look Pickens’ way for long portions of the game, and when they do, he delivers. Take, for example, Pickens’ first reception of the game coming with 57 seconds left in the first quarter where Mitch Trubisky puts the ball up in the air down the left sideline and Pickens makes the catch on CB Marlon Humphrey with S Marcus Williams closing in for a 42-yard gain.  Humphrey has been statistically one of the best corners in the league this season and Pickens manages to run past him and make the contested catch inside the Baltimore 10-yard line.

The very next play, Trubisky goes right back to Pickens on the goal line fade. Pickens is unable to make the back shoulder catch with the ball too far inside, but he does manage to draw a pass interference penalty on Humphrey, setting Pittsburgh up on the one-yard line and a Najee Harris goal-line plunge the very next play.

So, in two consecutive plays, Pickens manages to pick up a double explosive play down the field and draw a PI call to set up the TD. When does he see his next target? 13 offensive plays later with 42 seconds left in the second quarter.

Pittsburgh is in the hurry-up offense attempting to put points on the board before the half as Trubisky targets Pickens deep down the left sideline, again being matched up against Marlon Humphrey. Unlike the goal line fade, Pickens does manage to reel in the back shoulder throw on this one, treating Humphrey like the little kid at family Christmas as he snatches the ball at its apex and holds on to complete the catch with Humphrey trying to knock it out.

So, if you are keeping a running score at home, Pickens’ first three plays of the game result in a 42-yard gain, a PI call, and a 25-yard gain. Pretty good, right? Well, it doesn’t matter as the offense comes out of the half and again goes 12 plays straight without giving Pickens a target. His next and final target of the game comes on this 11-yard reception where Pickens is again matched up with Humphrey at the bottom of your screen as he gets into Humphrey’s cushion and breaks inside, getting a step of separation to make the diving catch over the middle to move the chains.

Despite throwing the ball all but two times in the fourth quarter, George Pickens wouldn’t receive another target in the game. While we can’t expect the offense to always be looking Pickens’ direction, it would be sensible to scheme up more opportunities for your talented wide receiver that is exposing one of the better CBs in the NFL as the game goes on. At least, that’s what a competent play caller would do anyway. We have seen it in the past where Pittsburgh would make a concerted effort to try and get Diontae Johnson involved after going long portions of the game without a catch, even though his own inefficiencies prove to hurt the offense despite increased target volume.

Johnson finished the game as Pittsburgh’s leading receiver, catching six passes on eight targets for 82 yards. However, Pickens finished just four yards shy of Johnson with five fewer opportunities, and likely would have surpassed Johnson if Trubisky would have targeted him on his third INT of the game, throwing the ball up for grabs down the field for Johnson with the pass getting picked off by Marcus Williams instead.

If you look at Pickens on this play at the top of your screen, CB Marcus Peters is playing off-coverage giving Pickens plenty of space on the comeback route to make the catch near the sideline for the first down. Trubisky just needs to overthrow the LB dropping to the flat to complete that pass, but instead targets Johnson which results in the turnover.

George Pickens is having a strong rookie season all-thing-considered regarding the state of the Pittsburgh Steelers offense in 2022. Thus far with four games left to go, Pickens has amassed 40 receptions on 64 targets for 590 yards and two TDs. However, what is frustrating concerning Pickens’ rookie season is the fact that he will flash incredible plays down the field and one of the better combative catch specialists in the league or put together strong performances like against the Jets or Dolphins this season and will be completely fazed out of the offense the very next week.

I get that coverage and the progression of the route tree like Alex Kozora of Steelers Depot has pointed out a couple of times this season can be reasons why the offense will go away from Pickens in games, but when your immensely talented rookie receiver is burning a Pro Bowl CB on the regular on the limited opportunities he does get in the game (of which Humphrey agreed with after the game), you need to find ways to give that guy more chances to make plays.

‘He Was Burning Me Out There Today:’ Marlon Humphrey Says George Pickens ‘Has A Lot Of Dog In Him’

George Pickens isn’t going to make every play. But he makes more plays than not, which is vital given how ineffective and inefficient this offense has been at times this season, especially in the second half. This isn’t the first time that the Steelers have gone away from Pickens in the second half of a football game this season, only to see their offense sputter in the process. While he may be only a rookie George Pickens has shown us the capability to take over games, even against some of the better cover men in the league. If the Steelers’ offense wants to avoid stalling in the second half of games, perhaps giving players like Pickens more than one opportunity would be a good place to start.

What are your thoughts on George Pickens’ performance against the Ravens? Do you think that he should have received more opportunities in this game? Should the coverage and offensive scheme dictate Pickens’ un-involvement in games, or should the offense find ways to give him chances to make plays? Please leave your thoughts in the comments section below and thanks again for reading!