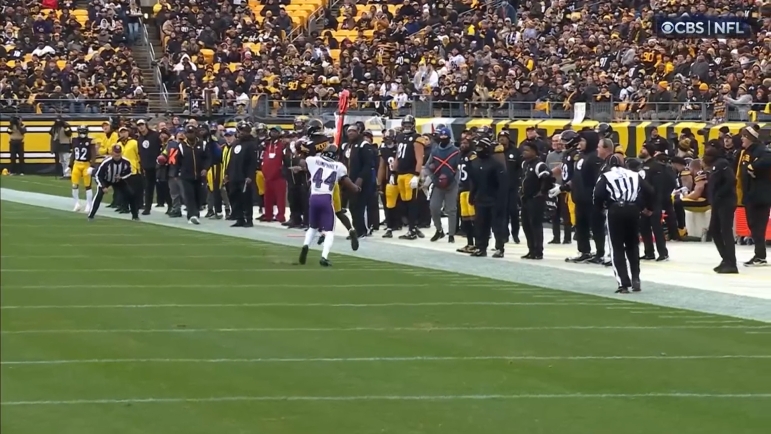 After a performance against the Atlanta Falcons where he had just one reception for two yards, Pittsburgh Steelers rookie wide receiver George Pickens made some big plays today, hauling in all three of his targets for 78 yards. Baltimore Ravens corner Marlon Humphrey attended Hoover High School, the same school as Pickens. He said he used to try to recruit Pickens for the track team, and said Pickens burnt him in coverage today.

“I tried to recruit him, a lot. Maybe he knew a thing, because he was burning me out there today. But it was really cool to see and have another guy you know – know where he’s from and everything – match up against,” Humphrey said via official transcript provided by the Ravens.

Humphrey also praised Pickens and said he knew he was going to be really good, and also said he knew that he would probably end up with the Steelers.

“I knew he was a really good player. And I kind of knew Pittsburgh would probably draft him, just because he’s a Pittsburgh guy.”

Humphrey clarified by what he meant as a Pittsburgh guy.

“[He] just has a lot of dog in him. I’ve got a lot of respect for [Steelers head coach] Mike Tomlin. He’s not only a great football coach, but he’s a great man-builder for guys that kind of … Obviously, [George Pickens] had some draft stuff, some off-the-field things that aren’t head coach-friendly.”

Pickens had a few “incidents” during his time at the University of Georgia, namely getting ejected for fighting during his freshman year against Georgia Tech, and he was generally labeled as immature coming out of school. Obviously, some of that criticism has been fair so far, as Pickens has had a few outbursts about not getting enough touches, including last week. But Pickens is also supremely talented, especially in contested catch situations, and he’s been one of the best rookie wide receivers this season, despite being drafted in the 2nd round.

It’s still early in his career, but if it ever all comes together for Pickens, he could be the next great Pittsburgh Steelers wide receiver. He has 40 catches for 590 yards and two of Pittsburgh’s nine receiving touchdowns this year, and his athleticism and body control have been incredibly impressive. It’s interesting to hear Humphrey say that he knew how good Pickens was, as he was someone who’s had an up-close view of him ever since Pickens was in high school.

Humphrey’s comments about Pickens being a “Pittsburgh Guy” were interesting too. The Steelers and the Ravens usually target similar sorts of players in the draft and free agency, and the fact that Humphrey considers Pickens to be a Pittsburgh guy because of his edge, or that “dog in him,” and the fact that he says Tomlin is a “man-builder.” Earlier this week, Tomlin got praise from former Steelers linebacker Ryan Shazier due to his ability to coach each player as individuals and be a father figure for guys, and it’s clear that Humphrey believes Tomlin is a coach who could get through to Pickens.

Hopefully, Pickens and Humphrey continue to battle each other and Pickens can keep burning his fellow Hoover High alum.