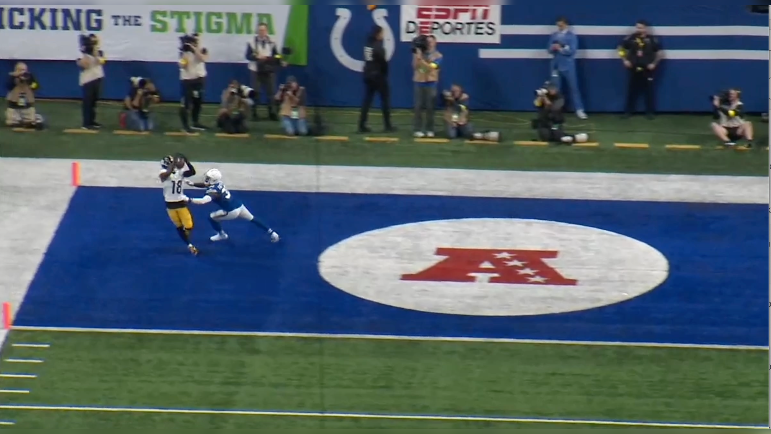 For Pittsburgh Steelers rookie quarterback Kenny Pickett, Monday night’s performance against the Indianapolis Colts on Monday Night Football in front of a national audience was the best of his young career in the NFL.

Pickett was on time, accurate and smart with the football, learned quickly within the game and used his legs to buy time and pick up yardage in the Steelers’ 24-17 win.

The performance led to an 88.5 grade from Pro Football Focus for the week, making him the second-highest graded QB in Week 12 in the NFL.

It could have been even better, if not for a few frustrating drops by his wide receivers in the win.

Pickett, who finished 20-of-28 passing for 174 yards and added six carries for 32 yards in the win, saw his receivers drop three passes on the day — one by Diontae Johnson and two by rookie George Pickens. A fourth one could be argued as a drop or a misfire, but it still was a missed opportunity and a chance for Pickett’s great night to be even better.

You all know what play I’m talking about.

With Pickens in the slot, the Steelers have the right call on against the cornerback blitz, getting the prized rookie receiver isolated one-on-one against Colts’ rookie safety Rodney Thomas II in the end zone.

Pickens runs a terrific route, shaking Thomas at the top of his stem, burning outside into space for what should have been an easy catch. Instead, it’s a misfire from Pickett.

It appears as though Pickens slowed coming out of his break just a bit. Pickett throws the ball where it’s supposed to go, which his towards the back pylon where only Pickens can get it, but it’s just a bit off. There was a bit too much heat on the throw, too. Pickett might have been a bit antsy seeing Pickens that open.

That said, I would have liked to see Pickens try to catch the football with two hands. It might have been tough to do, but he has a massive wingspan with great hands. Two hands probably secures a touchdown here, even on a slight misfire from Pickett.

That miss took away a would-be touchdown in Pickett’s stat line.

In the second half, Pickens had a really rough third quarter with two crucial drops.

Following a 16-play drive from the Colts, Pittsburgh desperately needed to put together a drive to possess the ball and keep its gassed defense on the sideline for a bit. Instead, the Steelers went three and out thanks to a rare drop from Pickens.

It’s a simple dig route from Pickens off the backside of bunch and the Steelers get the look they wanted. Pickens is open for what should be a first-down completion. It’s a bit of a low throw, but I believe Pickett was trying to ensure Pickens was protected here on the in-breaking route, getting him down to avoid the hit from the linebacker and the safety driving downhill. That’s what good quarterbacks do, and I think that’s what Pickett was trying to do here.

While it is a low throw, Pickens’ technique at the catch point is an absolute mess. He’s got his hands positioned incorrectly and has the ball go right through his hands for a crucial drop on a third down play.

The throw would have gained roughly 12 yards and move the chains to the PIT 28.

On the very next drive, after the Colts took a 17-16 lead, Pickett and the Steelers come right back to Pickens on a comeback route off of a quarterback waggle.

Pickett does a nice job throwing this on the run to the sideline where only Pickens can get it on the comeback. It plays it strangely with his hands again, almost like he’s second-guessing himself, and drops the football on the sideline. The completion should have been a gain of roughly 15 yards, setting the Steelers up with a 1st and 10 at the 40 yard line.

Though the drop was tough to see, the Steelers ultimately marched down the field and scored the eventual game-winning touchdown on a 3-yard Benny Snell Jr. touchdown, but not before another tough drop by the Steelers.

Diontae Johnson has had his struggles this season from a production standpoint. It’s led to some frustrations for him and for the fanbase, but he’s kept his head down and continued to work.

He had an opportunity here to get on the board with a touchdown on a fade route one-on-one against Colts’ cornerback Brandon Facyson. That’s a matchup you’d like to take every time if you’re Pickett. Really, the rookie quarterback couldn’t throw this ball any better. It’s back shoulder, to the sideline and in the only spot that Johnson can make a play on it.

It’s a dime. Johnson just doesn’t finish. It hit his hands and has to be a touchdown.

Adding up the three clear drops from Pickens (two) and Johnson (one), Pickett’s stat line should have read: 23-28 passing for 203 yards and a touchdown. If you want to add in Pickens’ failed one-handed grab, it’s 24-for-28 passing for 210 yards and two touchdowns with no turnover-worthy plays.

While it was still a pretty darn good showing overall for Pickett on the night, it could have been even better if he got some help from his top two receivers in big spots.