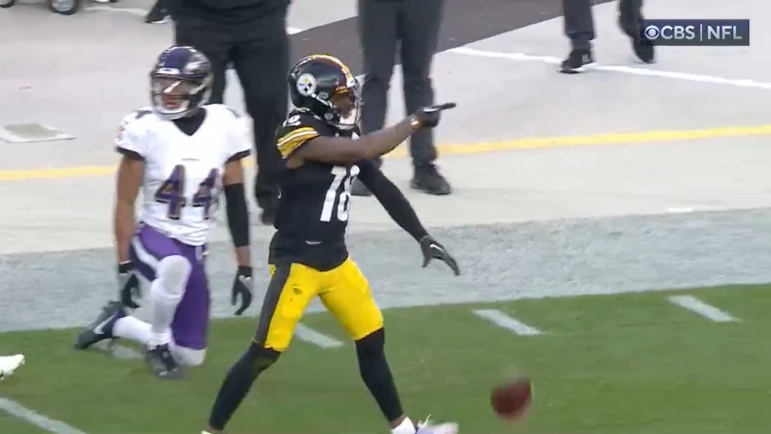 While much of the Pittsburgh Steelers fanbase has seemingly turned on fourth-year wide receiver Diontae Johnson for some untimely drops and instances of not getting upfield after the catch, he’s still popping on tape each and every week. The unhappiness with Johnson is only heightened by the emergence of rookie WR, George Pickens, with some calling for him to be the Steelers’ No. 1 receiver. I do think Pickens will eventually bump Johnson from that spot, but right now he’s far too raw to be that guy yet.

One of the biggest areas that separate Johnson from Pickens is route running and the ability to get open. Take a look at this chart from ESPN Sports Analytics Writer, Seth Walder. 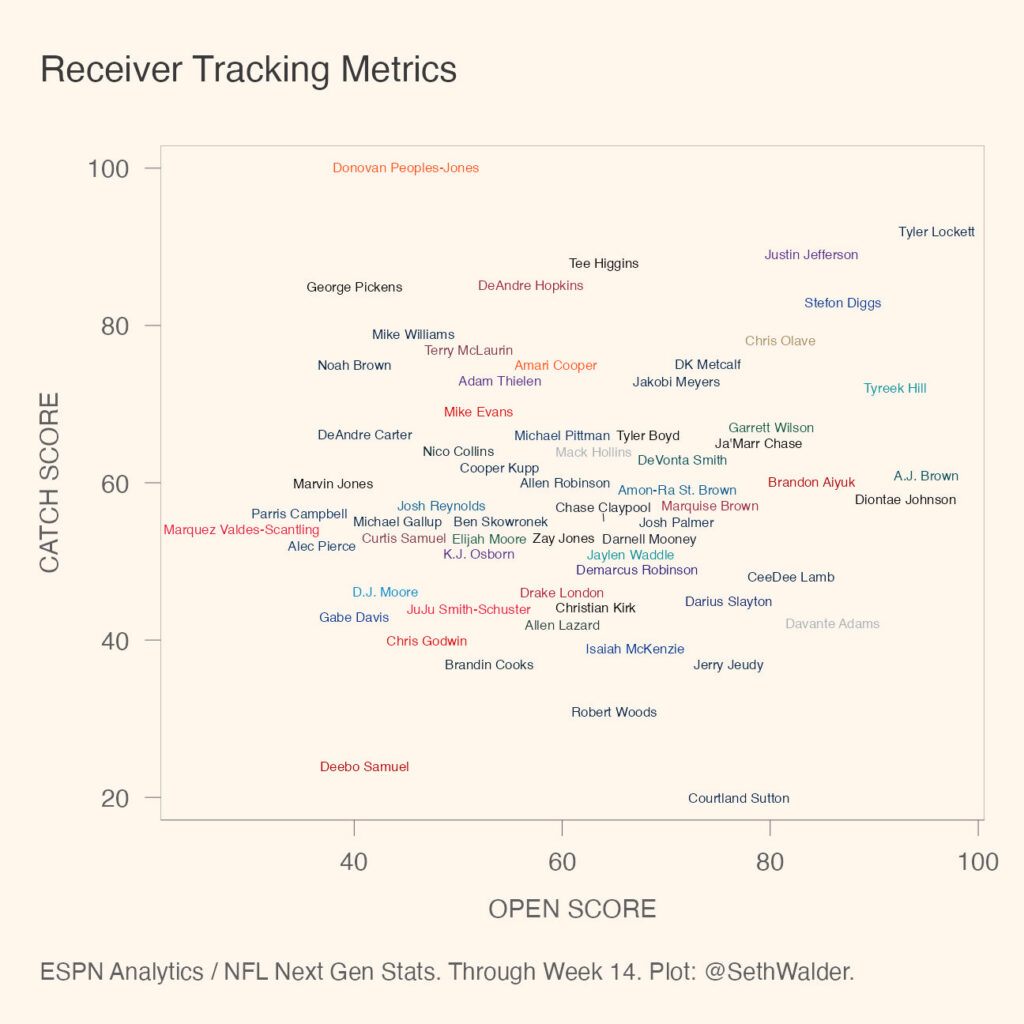 Through Week 14, Johnson’s “open score” is up there with the likes of Tyreek Hill, Justin Jefferson, and Stephon Diggs, all guys viewed as elite receivers in the NFL.

The narrative through the fan base is “we know he can get open, but he doesn’t catch the football” even garnering the name “Diontae Dropson.” To me, those narratives and names are simply misguided and crude. Johnson does have his lumps, but he’s also getting a raw deal playing in a poorly designed offense with poor quarterback play. The issue isn’t the fact he isn’t being targeted either. Johnson has the sixth-most targeted WR in the NFL. Per SIS, out of the top 20 WRs targeted, Johnson has the 5th-worst catchable target rate. Johnson has left some plays on the field, but it goes both ways, poor QB play hasn’t helped.

In terms of getting open, Week 14 was no different for Johnson. He was getting separation play after play, putting together one of his best games of the season, catching six of eight targets for 82 yards. The yardage output was his second-most of the season, only two yards behind his week three performance against the Cleveland Browns. Let’s take a look at him running through the Baltimore Ravens’ defense.

One thing Diontae Johnson has truly mastered is working into DB’s blind spots. It’s hard to cover what you can’t see. Here, Johnson works his get-off behind the zone drop of Marlon Humphrey and is able to break off his route just as he fully gets into Humphrey’s blind spot. Add in a subtle push-off at the top of the route and you give yourself a good four yards of separation against one of the best cornerbacks in the NFL. Great rep even if he’s not targeted.

We’ll stick with Diontae Johnson’s subtle push-offs here. The Steelers go empty with Diontae Johnson the furthest right in a trips-bunch look. He has a wide-release bam out, but it’s what he does right at the 35-yard line that wins him the route. Watch as he takes his route vertical for five yards before cutting toward the sideline. It squares up the corner and gives the corner the illusion that Johnson has a two-way go, even though he’s running an out route the entire time. Johnson again gets a push-off at the of the route and you can see Marcus Peters is not happy about it after the play.

This rep, Marcus Peters is playing up on Johnson inside the 10. Johnson’s footwork easily walks Peters off the line and would have been an easy touchdown. Unfortunately, Trubisky, pre-snapped the one-on-one look with Pickens up top or it would have been a walk-in touchdown for Johnson.

The Steelers successfully moved Johnson around a good bit in this game, here putting him inside on a two-wide receiver bunch. While it may not look very hard, as Johnson is running a stop route against zone coverage, the subtleties to his route running are great. Love that he gets skinny, avoiding the reroute by the expanding safety. Then, while Trubisky is getting wrapped up, he works his way all the back to give a solid target for his QB.

Saw some complaints about Johnson’s run after catch here, but I have zero problems with it. He’s coming back for the football and his momentum carries him further back. Saying anything more than that is disingenuous.

Here’s more work from Johnson in the slot. With Pittsburgh going empty and Baltimore staying in nickel, it leaves Odafe Oweh on Johnson. The matchup is what wins the play, as Johnson doesn’t need much to beat Oweh, but what he does after the catch is what impresses. Johnson is able to keep his balance and spin Oweh off, turning what would be a four-yard catch into a first down.

Next, is a slot rep against an actual defensive back. He’s so sudden in and out of his breaks that he’s practically uncoverable when he wants to be. It’s an easy pitch and catch for him and Trubisky.

The last thing we’ll touch on is Johnson’s ease of vertically stacking cornerbacks. It’s something that we haven’t been able to see the Steelers take advantage of enough in 2022.

Johnson’s footwork off the line is special. He slow-plays his release and completely sets up the cornerback. He works outside to give himself room to explode inside, leaving the cornerback grasping at air trying to cover him. You cannot ignore the great throw from Trubisky, laying it right in stride to Johnson as he boxes out the corner on his back.

Now, we go from a great Trubisky throw to a horrible one against single-high coverage. With nobody inside him, Johnson is able to go to the easiest release, which in this case is inside. Thanks to that move and his burst, Johnson is able to stack the corner on his back. Unfortunately, Trubisky is staring down Johnson the entire route which gives the single-high safety ample time to venture over and pick off this overthrow.

Plays like this are the ones that are disappointing. Johnson does his job, but the quarterback does not. It’s not certain that Johnson reels in this ball, but you have to at least give him a chance. The combination of not looking off the safety and poor ball placement makes that impossible.

This is another where Trubisky has to give Johnson a chance. It’s not as clean of a vertical stack from Johnson but it’s enough if that ball is in play it’s likely a touchdown.

This is the last clip we’ll look at. Another Johnson vs. Humphrey matchup. This ends up being called an OPI and a DPI, I honestly don’t agree with either of them. What it comes down to is another poorly-placed ball by Trubisky. Johnson beats Humphrey off the line working inside out and leaves Humphrey falling over himself. If Trubisky puts this ball more towards the pylon there’s a chance for Johnson to pull in his first touchdown of the year, instead, it falls incomplete out of the back of the end zone.

All in all, this was a great game from Johnson. Even with it being one of his best statistical games in 2022, it could have easily been a lot more. That is essentially the story, not only for Johnson but the entire Steelers offense this season. Through missed opportunities, bad luck, and poor execution nothing has seemingly gone their way. One constant though is that just like the Denny’s on Freeport Road in Pittsburgh, Diontae Johnson is open 24/7.