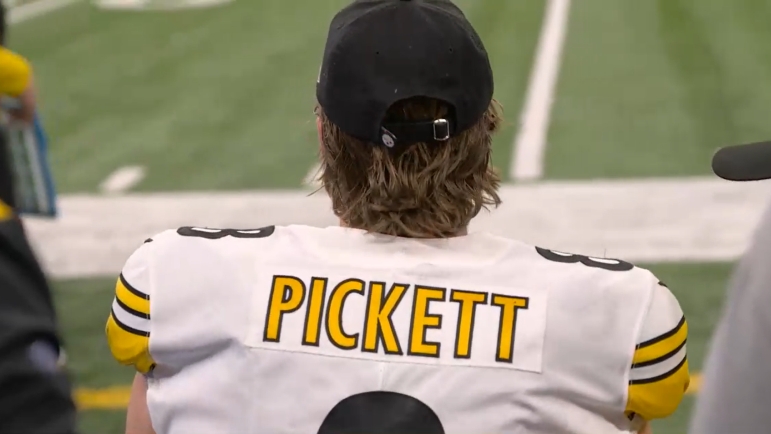 The Pittsburgh Steelers have won two of their three games played since the bye week and were competitive in the third, even holding a halftime lead before things started to slip away in the second half. Things could be going a lot worse, in other words, as the new era of quarterbacking in the city continues to get underway.

That quarterbacking comes courtesy of Kenny Pickett, the rookie first-round pick who played his college football in the same stadium. He has been the starter of record since Week 5 after head coach Mike Tomlin pulled Mitch Trubisky at halftime a week earlier. He’s 3-4 since then, but has been making steady progress—and in the assessment of his opponents, running a complete offense.

“I don’t think they’ve simplified things at all,” said Atlanta Falcons defensive coordinator Dean Pees, formerly of that same post in the AFC North with the Baltimore Ravens, and thus who knows a thing or two about what Steelers offenses have looked like.

Granted, the Steelers were drawing criticism in the early portions of the season for running too simplistic an offense, or at least an offense that on gameday worked from a very small menu. Offensive coordinator Matt Canada isn’t exactly garnering attention for head coaching positions in the near future.

But the point is, there hasn’t been any change for the simpler in the Steelers’ offense in spite of the fact that they changed quarterbacks mid-stream from a seasoned veteran with ample starting experience to a rookie draft pick who was not getting first-team reps in the offseason.

That’s a testament not only to Pickett’s football intelligence but also his work ethic in the classroom, another fine example of which we saw on Monday in diagnosing the proper play call to run on 3rd and goal in the fourth quarter, which led to the game-winning touchdown.

“I think the guy is just gaining experience and feeling more comfortable back there,” Pees said of Pickett. “It’s like anything else…the more you play, the better you feel, the faster you play because I’ve seen it now a little bit. I think it’s just him gaining experience.”

In terms of experience, Pickett has now logged 520 snaps during his rookie season. He has completed 175 of 265 pass attempts (66 completion percentage) for 1600 yards, albeit with a 3-to-8 touchdown-to-interception ratio.

But more importantly, he is leading an improving offense that has put up 74 points over the course of the past three games, nearly 25 points per game. Considering they never scored more than 20 points in the first eight weeks, that feels more than just a little bit significant.