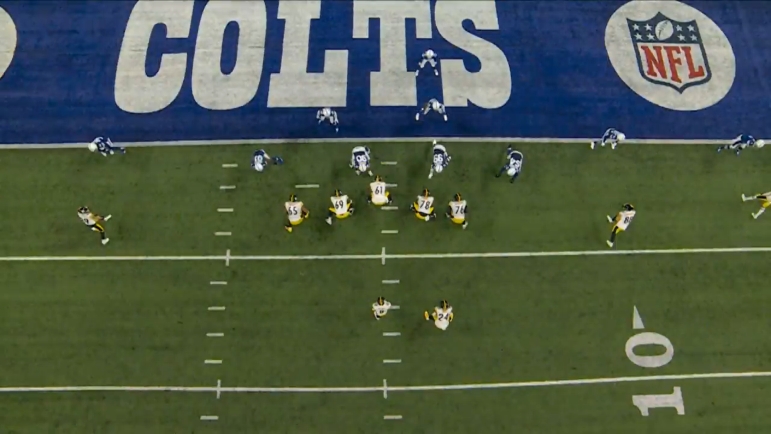 Pittsburgh Steelers rookie quarterback Kenny Pickett is getting a lot of praise right now, and deservedly so after a comeback win in primetime. He has been receiving his plaudits from around the football world, including from those who had previously been critical of his potential.

Yet nearly everybody has had to acknowledge the growth we have witnessed over the past two months, and for many that can be summarized in the fact that he called the game-winning play on the Benny Snell Jr. touchdown run. While we’ve heard this already, yesterday Pickett went into detail about why he thought that play would work based on what he saw, via the team’s website:

I felt like they were really concerned with my legs and how I was doing that throughout the game, so I felt like if there was a zone read, we didn’t block the end and they actually had a guy on the second level that was waiting for me, too, so we had two unblocked guys that I knew we had a pretty good play on if Benny got it to the left side, and it worked well.

A lot of teams were trying to throw it on them down there and they weren’t too successful, watching the film, it looked like, in a spread set. A lot of teams had a lot more success running the football, so adding my legs to that, it’s something [where] you can occupy at least one guy. Luckily we had two guys that were waiting for me on the read and Benny walked in, so great play.

Now, does that really sound like a rookie to you? Not only was he able to process what he was seeing from the Colts during the game, but he was also able to marry that due to the film study work that he had put in during the week to read tendencies and put together the right play at the perfect moment.

It worked out well, needless to say, resulting virtually in a walk-in touchdown, and Pickett is right for pointing out the impact that his mobility has had on keeping defenses more honest to a certain degree, particularly in close-quarter situations like on the goal line.

For the third time in the past four weeks, he rushed at least six times in a game, picking up 32 yards this time. The Steelers are even incorporating some designed, or as Pickett said, zone-read runs for him to execute, which is certainly a new dimension for this offense.

He may not be throwing touchdowns left and right, and he needs to get his yards per attempt figure up, but the rookie has made real strides. Importantly, that has come not just after the snap but particularly before the snap, and that is what most encourages me about the future of the team.