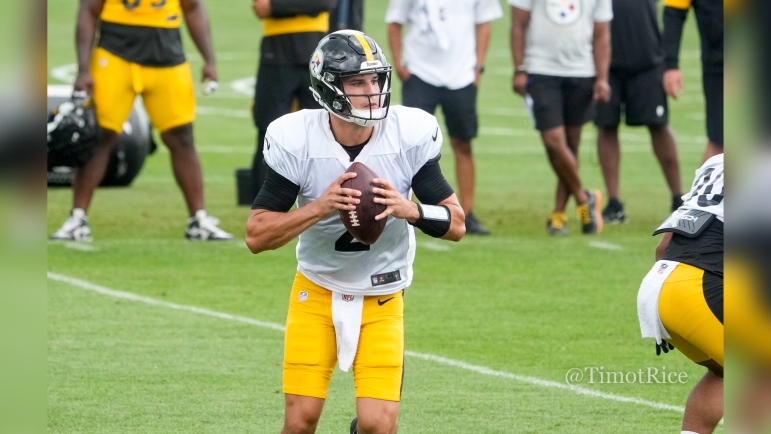 Diontae Johnson sure is making it sound like Mason Rudolph is going to start this weekend. And he’s endorsing the idea. Speaking to reporters Thursday, Johnson said he’d be happy to see Rudolph get his first start of the season Sunday against the Carolina Panthers.

If Kenny Pickett is unable to play this weekend after suffering a concussion in Week 14’s loss to Baltimore, Mitch Trubisky and Rudolph will battle to replace him. Evidently, it’s an open competition despite Trubisky working as the #2 QB since being benched four weeks into the season. Mike Tomlin didn’t commit to next-man-up during his Tuesday presser and Rudolph said he’s been told it’s an open competition, the two splitting team reps during Wednesday’s practice (Pickett was limited and worked through individual drills).

Johnson said Rudolph is ready to meet the moment.

“I feel like this week is it for him. I know he’s going to do everything it takes to prepare this week and get ready for Sunday.”

Rudolph has served as the Steelers’ #3 QB all season, a weekly inactive, and hasn’t dressed for a game yet along played in one. He made one start last season, a Saturday night shift after Ben Roethlisberger tested positive for COVID, and Rudolph led a 16-16 tie against the Detroit Lions. But context is key and the Steelers likely would’ve one had the team not suffered costly fumbles late in the game by TE Pat Freiermuth and Johnson himself.

Johnson seems excited for Rudolph to get his chance. A free agent after the year, this could be the last time Rudolph plays for the Steelers. And after an argument with Mitch Trubisky during halftime of the Week 4 game against the Jets, perhaps Johnson wants to see a different face under center who will get him the ball.

Of course, this could be all moot if Pickett is cleared and has enough reps to play. But if he’s not, it sounds like there’s a very real chance Rudolph will pass Trubisky and get a shot to show what he can do in Carolina.