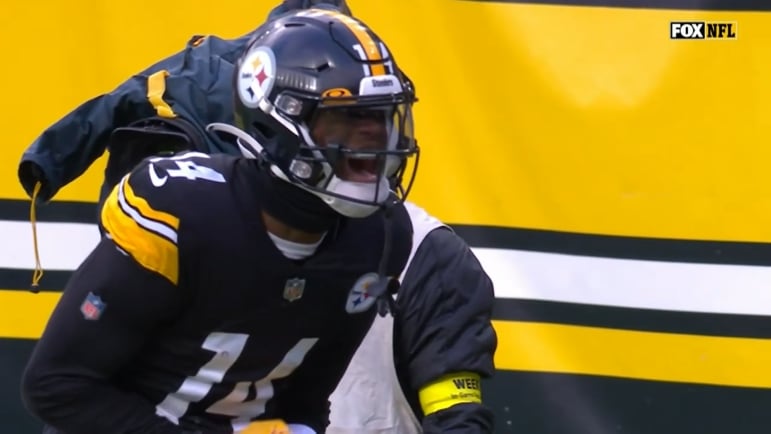 WR Diontae Johnson spoke to the media Friday in the locker room and talked about his hip injury that prevented him from practicing yesterday as well as the team’s upcoming matchup with the Baltimore Ravens.

When Johnson was asked if he expects Baltimore’s cornerbacks to talk trash throughout the game, Johnson laughed saying he knows that the Ravens will try and get under his skin as well as the skin of his teammate: WR George Pickens.

“Oh yeah,” Johnson said to the media on Friday on video from Steelers.com. “Marcus Peters. Marcus Peters is going to talk the most out of all of them. So, I’m going to have to tell G.P. [George Pickens] to keep his head.”

Johnson mentions CB Marcus Peters by name as the cover man for the Ravens is known for having more of a flamboyant personality when it comes to trash talk on the field and showing off when he makes a play. Johnson has plenty of experience facing Peters in the past, but also was quick to mention fellow WR George Pickens as a player that will need to keep his head and stay calm when Peters and the rest of the Baltimore secondary is going to try piss him off.

“I’m sure, I’m sure they are,” Johnson answered regarding if the Ravens will try and get in Pickens’ head Sunday. “They’re going to try to use that against him because I’m sure they seen it on TV, so I wouldn’t be surprised if they didn’t. But, you know, it is my job to be there for G.P. in that moment to keep his head so he don’t get to that.”

Pickens has been under the microscope this week after having a meltdown on the sideline in Atlanta due to being a non-factor in the offense. While Pickens may not have handled the situation the greatest, multiple teammates have stood up for him throughout the week, praising him and his competitive demeanor as he desires to make an impact on the field to help the Steelers win games.

While facing the likes of Marcus Peters and Marlon Humphrey will be a challenging task for Pickens on the field, perhaps the bigger challenge for the rookie receiver will be to keep his cool when they will intentionally try to get under his skin and enable a response based on last week’s events. Pickens has shown that he has no problem getting physical with defensive backs in the past but will need to have a calm demeanor in this one to be a factor in a must-win game for the Steelers especially if Johnson is hampered due to injury on Sunday.