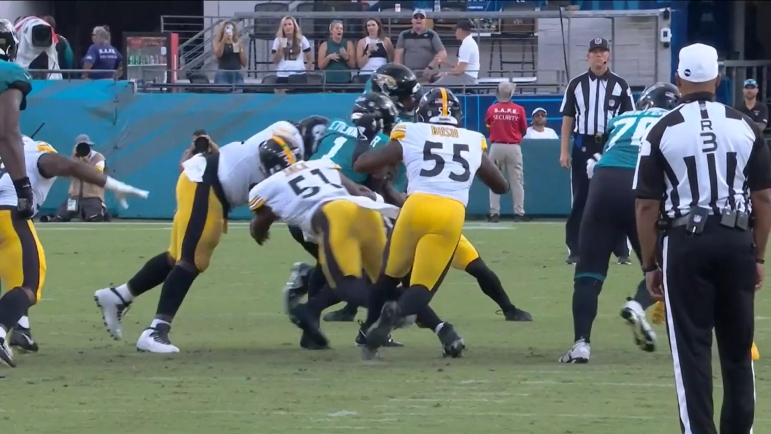 Pittsburgh Steelers middle linebacker Devin Bush Jr. has been much maligned in his four years on the team. After a good rookie season, he tore his ACL his second year in the league and struggled last year in his return. While he has been better this season, he still has his fair share of critics.

One person who has been impressed by Bush this season is his linebacking partner Myles Jack. Speaking with Aditi Kinkhabwala on 93.7 The Fan, Jack gushed about Bush’s understanding of the game.

“Devin has an intelligence on the field, or just a football IQ, that I think a lot of people don’t typically understand,” Jack said. “I’ve been playing for seven years and I think this is his fourth or fifth year, and he’ll say stuff to me on the field that I didn’t even processed yet. I’ll look over and I’m like ‘You’re right, I’ll look out for that.’”

Due to Bush’s posts on social media a couple of years ago and his comments this offseason about possibly playing somewhere else, he caught a lot of flack among Steelers fans. However, his on-the-field play has taken a huge jump from last season.

Jack’s comments on Bush are interesting because not much comes out about Bush. He normally stays to himself, and due to his playing better this season, not much attention has been placed on him. He has not been playing at an incredible level, but at the same time, he is not making many mistakes to where fans and analysts can point them out. Part of the reason is probably due to his football IQ.

It is well known that Bush did not feel comfortable last year coming back from his torn ACL. He probably did not fully trust his athleticism which was his calling card coming out of the University of Michigan. This led him to being slower on everything and second guess things.

Now he has regained his confidence and is back to making plays. While Bush is not creating the splash plays he was in his rookie season, he is still effective on the defense. He has been credited for two pass defenses and 65 tackles.

With his improvement of play and the way his teammates talk about him, it would be nice to see Bush get a second contract in Pittsburgh. A player should not be defined by one bad season. Especially if they have improved since then.