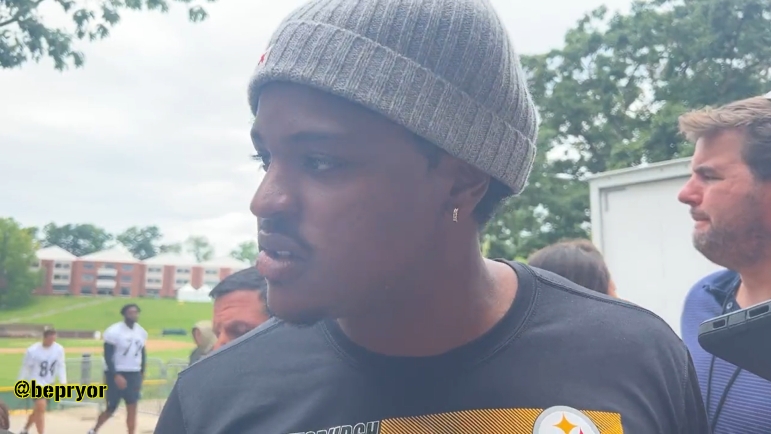 Around this time last year, we were still fostering hopes—ignoring Joe Burrow—of Devin Bush making a run at being the Comeback Player of the Year for the 2021 season. Coming off of a torn ACL, the Pittsburgh Steelers’ former top-10 draft pick missed most of the previous year, but returning to the field, he hardly looked like the same player.

Since then, the team elected not to pick up his fifth-year option, under which he would have been scheduled to play in 2023, meaning that he is now due to become an unrestricted free agent in March.

Asked before practice yesterday if he feels this is now a make-or-break year in terms of the opportunity have a future here, he asked first, via Brooke Pryor of ESPN, “Like a Steeler?”. When he got the affirmative clarification, he said, “I mean, it’s a business. I’m gonna still be in the NFL, so. We’ll see”.

Devin Bush asked if this is a make-or-break year, a last chance, after getting his fifth-year option declined:

“Like as a Steeler? I mean, it’s a business. I’ll still be in the NFL, so we’ll see.” pic.twitter.com/CpJfVtVWqT

Now, it goes without saying that that answer isn’t going to do him any favors. Players have an expectation of presenting loyalty to their team and never actually wanting to change teams. But if we’re being honest, the response that Bush gave was fair and sincere, even if it doesn’t endear himself to Steelers fans—perhaps even some in the organization—that just reflects reality.

Players change teams all the time. They have no more loyalty to teams than teams have to players. Bush knows there is a more than fair chance that the Steelers are not going to retain him after this season, but, realistically, he’s probably going to be somewhere.

He didn’t at any point say that he’s looking to be anywhere besides Pittsburgh, nor did he say anything negative about his time here. He didn’t rant and rave about how wonderful it is and how meaningful it would be to continue his career here for the team that thought so much of him that they made a virtually unique trade up for them to go and get him.

Perhaps a part of him just understands that his focus has to be on the field. He knows that he didn’t play his best last year. He knows that his starting role is being challenged. He basically knows that, even if he does start, Myles Jack is going to be the every-down linebacker based on the dime looks they’re running.

There’s nothing he gains by thinking about next year in August. His contract is guaranteed, so he doesn’t really have to worry too much about his roster spot, but he does have to have a much better season than he did in 2021.

Because it’s good business to play well, and the Steelers and all 31 other teams are going to be reluctant to do business with him if he doesn’t. Certainly, his earning prospects will greatly diminish if he doesn’t put much better tape out there. It’s a business. But the business is the game, and how well you play it. How well will he play this year?